After noshing on a spectacular meal at Nara Thai BKC, I thought to myself that it couldn’t get better than this! But as I walked in the old-world colonial beauty which makes up the new entrant in town-Nara Colaba, I was convinced that the stunner of a restaurant that Nara is- it should definitely live up to its legacy. 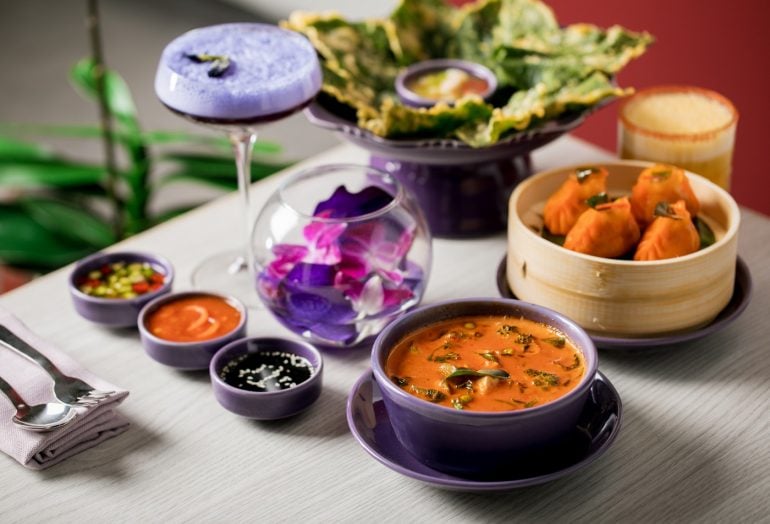 By looks of it, Nara promises to be a combination of an archaic and picturesque Thai frontier. What’s interesting is that it creates a country cuisine centric all-dining space that captures the charm of the bygone era. Think designs and elements of Thai household and a 4600 sq. feet sprawling dining environment that fuses Nara’s patent colour palette – purple. There’s a dedicated bar area that boasts of a marble bar counter with rattan bar stools and lounging sofas that sets the right, relaxing mood. It features two private dining rooms named after the exotic locations Erawan and Siam.

As for my meal here, a serving of the Phad Tahu Prik Kra Tiem- crispy tofu in chili soya turned to be perfectly-flavored and irresistible. The lotus root chips in sweet chili sauce, to my delight, lives up to its claims of being crispy and absolutely addictive. Next up were the silky, aromatic Tom Ka Soup- a comforting, spicy coconut and galangal soup with chicken. I also loved the Pla Neung Ma Nao, steamed John Dory with spicy chili lime sauce which such a medley of subtly beautiful flavors that with every bite I could feel the detailing that had gone in its preparations. For the mains, I opted for the Massaman Curry. The gorgeous curry sauce seemed like a mixture of curry paste, coconut milk, a strong flavor of peanuts, and a hint of nutmeg and cinnamon. Alongside chicken, a few chunks of potatoes had delightfully soaked up the coconut milk like a sponge. And I savored every bit of the deliciousness with glee.

The Khao Phad Samunprai (Butterfly Pea Fried Rice with Thai herbs) was all sorts of deliciousness with a delightful chewiness to it. I round my meal off with the Thai Crepe Cake succulently flavored with fresh mango alongside the best Thai version of coconut ice-cream that I’ve had in India. My meal here assured me that this new stunner with the vibrant exquisiteness of age-old Thai cuisine is sure to serve guests with loads of foodgasms!