There’s something about classic class that trumps modern minimalism any day. Which is why it was an especial pleasure to find the hidden treasure of Chef Hemant Oberoi’s signature restaurant amidst the chrome and steel of BKC, Mumbai’s business district, fast becoming a trendy dining destination.

Entering the high-ceilinged expanse (24 feet high and 3,000 feet square, we are told), we felt instantly uplifted by the sheer spaciousness of the place. Meanwhile, the warmth of the waitstaff who greeted us, ushered us to our table and promptly conjured up a little stand for my handbag, made us feel like cherished house guests welcomed back into the fold. The wood panelling, subdued lighting, large floral arrangements and pristine white tablecloths were reminiscent of fine repasts in five-star restaurants even as contemporary touches like a splendid light installation featuring white doves and flying fish in the centre of the ceiling (by designer Shailesh Rajput) reminded us that Hemant Oberoi, the fabled chef as well as his eponymously named fine-dining restaurant, is very much of the moment. We could detect the design vision of Architect Ashiesh Shah, who has created many an on-point space, in the floor-to-ceiling windows with wispy white blinds and in the contrastingly deep shades of black and hints of gold all around us. 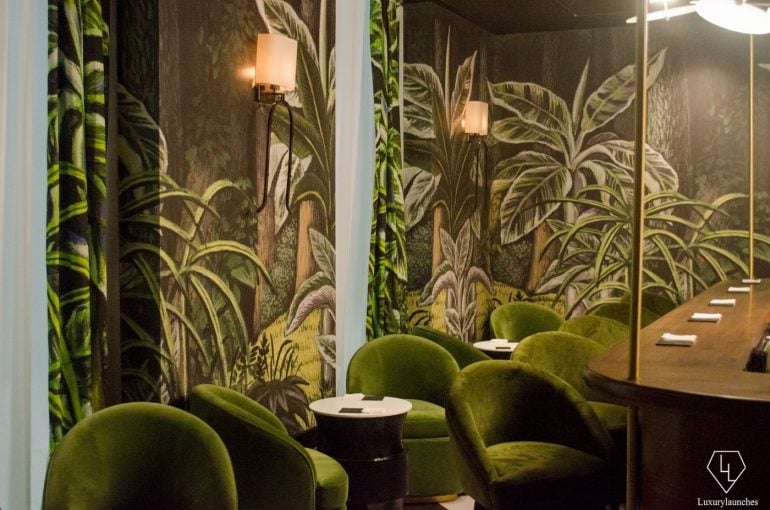 As we admired the charger plates with the stunning logo that reflected just these colours, and opened our menus, the poetry continued, this time literally appearing as a poem by Chef Oberoi! These lines were especially evocative…

My canvas is a white plate with rims of gold

And when I paint, spices add the colour

But what is a masterpiece, if not to savour.

And right from the first course to the last, that’s exactly the quandary we had to surmount – to admire the artistry open-mouthed or to finally give in to temptation and savour the meld of exotic ingredients and elaborate technique. The Perushi (Peruvian sushi) arrived at the table sitting pretty on a chair covered with ‘carrot leather’. The accompanying amarillo chile aioli was in a squeezy resembling a bottle on a little table, along with a neatly folded gari napkin. One didn’t know whether to play house or pop that picturesque morsel into the mouth. The soup course presented no such dilemma, as both the potages we tried could be had by the bucketful, no questions asked. The hearty and creamy leek and imported-from-Cusco mountain potato soup was poured dramatically over a carpaccio of beetroot and felt like velvet on the tongue. My dining companion’s chilled three-melon gazpacho was – although hard to believe! – even more delicious in its bright, refreshing flavours and a more than bearable lightness of being. So pretty, we didn’t even roll our eyes at the liquid nitrogen giving birth to the coconut ‘snow’ that came with!

Both the vegetarian and poultry options of the next course dove-tailed nicely, in terms of both shape and flavour profile. In the Asparagus Parfait as well as the Chicken Anticuchos with salsa verde, the brilliance was in the rub of subtle spices, both familiar in zing and yet exciting in their smoky alienness. Both, tender to the bite and amazingly complex on the tongue.

ALSO READ -   Experiencing the taste of Phuket in the heart of Mumbai. Dashanzi at JW Marriott Juhu superbly recreates Thai delicacies to the T

There was a bit of drama in the anticipation of what was to follow. Much like the way an audience waits with bated breath for the red velvet curtains to part before the music strikes up and the cast of the opera comes on, we held our poise and patience with difficulty. Naturally, as this was the true test of Chef Oberoi’s culinary journey of more than four decades. Could he really improve on that perfect Camembert Dariole that has gone down in history as the epitome of the erstwhile Zodiac Grill’s excellence? Light as air and as exotic to the Indian palate as the moonlit dew-laced frothy confection Daulat ki Chaat would be to a French foodie, this soufflé has been much loved, much remembered and the loss much mourned by every regular at the iconic Taj Mahal Palace Mumbai.

Well, the Dariole v.2 is so delicate and yet so delicious, it’s easy to slip into hyperbole while trying to describe it. Its airiness, the way the Brie coats the tongue without over-whelming the tastebuds with the hit of truffle. When we asked Chef Oberoi why he chose this cheese over the Camembert, he merely (and much too modestly in our opinion!) shrugged his shoulders and said it was time for a change.

That’s basically been his modus operandi for a large part of the menu. While many of the dishes reference what Chef pioneered at the Zodiac Grill, there are several more that will completely dazzle the diner afresh. So, if he taps into the nostalgia of old favourites like the mini onion croissants with a beautiful parsley butter, he also has new stunners such as a Three Mushroom Ravioli that’s cryopac-d in-house. Served from a freshly opened old-school can over roasted oats with an intense black perigord truffle air, it even has toasted pecans for an added whomp of taste. While the very Asian-style Chilean Seabass is served on a foundation of orzo pasta and spinach, it’s liberally seasoned with smokey and hot Peruvian peppers. The humble-sounding quinoa risotto was actually one of the huge standout moments of our dinner. We couldn’t believe how Chef had taken something so simple and healthy and elevated to epic levels of luxurious dining!

While the food is certainly the hero at HO, the dry Pisco Martini, the Peru Peru and the Elderflower concoction from the Vintails menu complement it very well.

The perfect end to this delightful dinner that’s up there with the best that the country has to offer, was the multi-layered chocolate shawarma, cleverly melding French Valrhona with Belgian Galler and cake together on a rôtisserie. Served with the most scintillatingly pure rose ice-cream imaginable. The unlikely pairing of gooey and intense hot dark chocolate and fresh and light and cooling rose actually works and leaves you completely sated. Considering what a hit this dessert was with the Crown Prince of Kuwait then via social media and word-of-mouth with a veritable river of royals from the Gulf, we won’t blame you if you choose it as a fitting finish to a fine night out.

Note– The critic was invited by the Hemant Oberoi Restaurant, Mumbai. But all the opinions expressed herewith are her own.