Between the 1st and the 10th of May, the Sofitel Hotel at Mumbai’s Bandra Kurla Complex, hosted Chef Maher Omran for a ten day festival caked “With Love from Lebanon.” Chef Maher, who can usually be found at the Sofitel Dubai Jumeirah Beach, treated guests at the Pondichery Café to a dizzying array of delicious dishes native to exotic Lebanon. Chef Maher talked to us about the differences and similarities between Indian and Lebanese food, explaining the importance of spices and dried lemons. He emphasized that while Middle Eastern food is not as spicy as many assumed it would be, it is packed with flavour thanks to unconventional ingredients and cooking techniques.
Pondichery Café offers food in a buffet style set up which makes it easy to try a lot of new dishes at once. 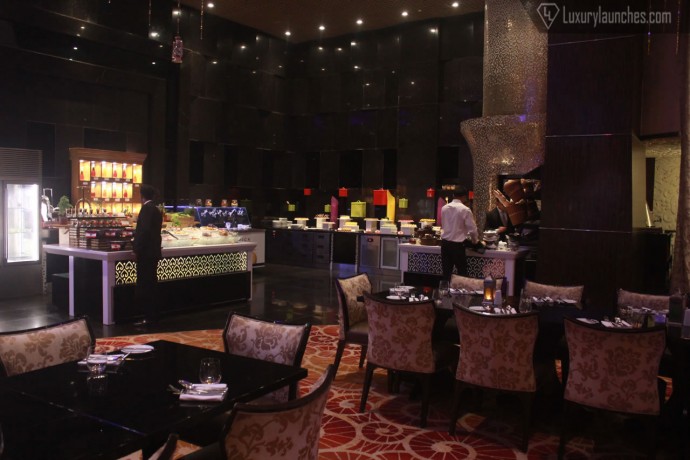 Ambience:
We visited the Pondichery Café on a Saturday when it appeared to be packed with families and things got pretty loud in the restaurant. If a romantic inner is on the cards, avoid visiting on the weekend or be on the lookout for an especially secluded table.
The décor, while extravagant by some standards seemed oddly fitting for the Middle Eastern food that we were awaiting. Printed carpets, high ceilings and dark tables coupled with richly upholstered seating characterized the space. The space is large and clearly planned with a buffet in mind as the tables are spaced apart and making the restaurant easy to navigate. 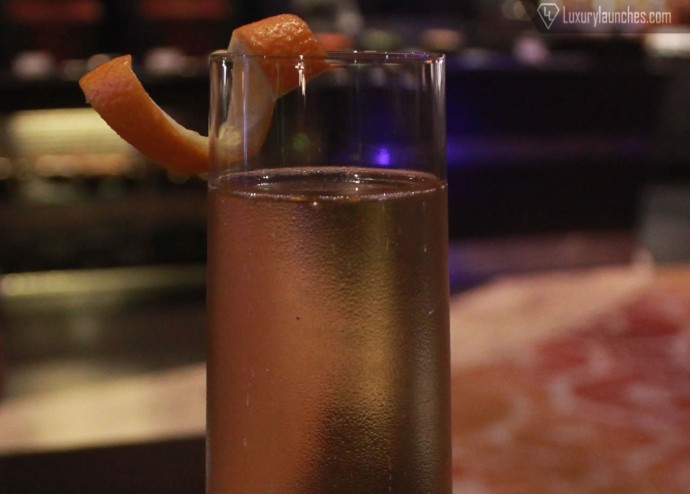 Drinks:
The restaurant has a number of interesting cocktail options and this is coupled with a long list of wines served both by the glass and by the bottle. Though the cocktails are the usual familiar classics, the menu is diverse enough to tempt anyone who is not too fussy.
We tried two drinks: A Bellini and a Southern Peach martini. Created with champagne and peach puree, the former had a somewhat polarizing effect on us. This is mainly a drink for tried and tested fans of champagne and might not go down too smoothly with first timers. If you love the bubbly, then you’ll enjoy this concoction that’s slightly sweet with just enough fizz to keep things interesting. On the menu was a bit of trivia about the Bellini, supposedly it was first created at Harry’s Bar, Venice in 1934.
Created with Southern comfort, Archers, apple juice and basil, the Southern Peach was our other choice for the evening. The drink was fruity without being too sweet and again divided our opinion. My companion couldn’t get away from it fast enough, whereas I would definitely order it again if given the chance. If a fruity drink with some kick to it is what you’re looking for, this should be your pick. 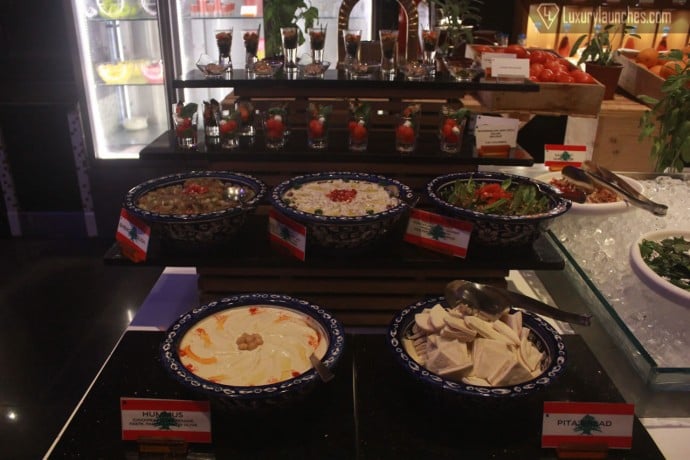 Food:
With so many options on hand, it was hard to decide what to try first! The Food Festival menu included a range of cold salads, traditional pita and dips, the ever popular falafels, main courses including pilafs, roasted vegetables, chicken, lamb and shrimp gravies and soups too.
Among the appetizers we tried the Arugula and Feta salad (Rocca Ma Jabent El Feta), the Tabouleh, the pita and hummus as well as the Babaghanoush and Moutabel. Among these, the Moutabel and Tabouleh stood out for their robust flavours and rich texture. The Hummus and Babaghanoush were (as the Chef had warned) quite different than what I’m used to and left me craving something spicier however the Moutabel was worthy of a second helping. The arugula salad was fresh and crisp while the Tabouleh was a welcome mish mash of fresh herbs and wheat. Don’t skip either of these.
The mains were a bigger hit, with Daoud Basha (a lamb meatball curry), Jambari Ma Jebent Feta (Shrimp in a tomato gravy), Dajaj Kabseh (a rice pilaf with chicken), Roz Bel Fawkeh (rice cooked with dry fruits), Khodar Mashwi (Roasted vegetables), Lamb Sambosik (Arabic dough stuffed with Lamb meat) and of course the Falafel. Both the rice dishes were hits with the sweet dry fruit filled Roz Bel Fawkeh scoring high points for being unexpectedly delicious. It was sweet, but not overpoweringly so and paired well with the other dishes on the menu. . The chicken rice on the other hand gave us the best kind of déjà vu with its almost biryani-like taste. The meatball curry wasn’t filled with spices, the flavour of the meat really came through The Roasted vegetables were deliciously smoky and charred, I wish I’d had more room in my stomach to savour them. The Lamb Sabosik was similar to a lamb filled samosa and while it was crisp and tasty, it felt out of place beside the other mains. The Falafel was not the most memorable dish, but again it was authentic in its flavour and ingredients. 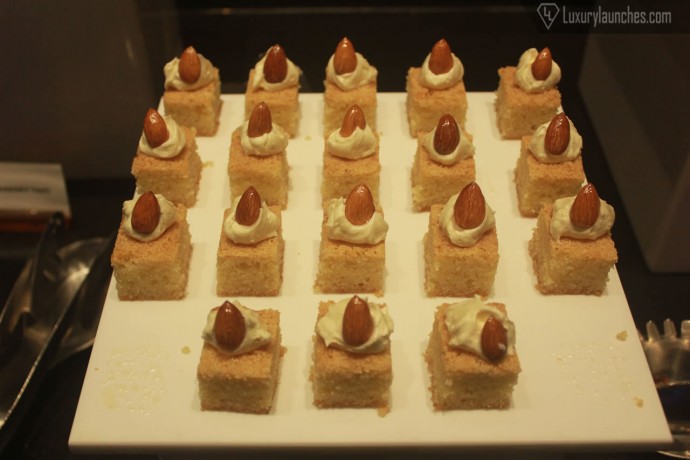 The Middle Eastern deserts on offer included Baklava, Rice Pudding, Bassousa, Mahalabia and Oumali (a puff pastry pudding with nuts and raisins). The Baklava was not as crisp as I’d hope and its strong rosewater flavour didn’t win me over. The Rice Pudding was not too different from the phirni that you’d often have at an Indian restaurant. The Bassous and Mahalabia also were forgettable, but the Oumali stood out for its contrasting texture and refined sweetness. We also tried a few desserts from the regular (non-festival) menu including the strawberry tart, chocolate brownie and Basil rasgulla. These were exceptionally good and the Basil Rasgulla made the most amazing and unexpected finish to the meal. If you’re ever at the Pondichery Café and Basil Rasgullas are on the menu, do not hesitate to try one.

Recommendations:
To people who are really familiar with Middle Eastern food (especially if you have travelled to Lebanon and tried the local food) and are fond of it, I would recommend everything. Each dish was crafted with considerable thought using the right balance of imported and local ingredients.
To first timers (like myself) I would recommend the Tabouleh and the Moutabel as appetizers. Among the mains, the Roz Bel Fawkeh, the Dajaj Kabseh, the Daoud Basha and the Khodar Mashwi will reward your bravery in trying something new. On the dessert front only the Oumali really excited me on the Lebanese menu, but the Basil Rasgulla was a worthy contender worthy of a mention.

Verdict:
I am always taken in by buffet style service. Something about being able to try everything without the fear of having to waste food if you dislike a particular dish opens the door to culinary adventurousness. For this reason alone, I would probably attend any and all food festivals at the Pondichery Café. Aside from that, the Chef’s commitment to authenticity was commendable. The food and service were definitely up to the mark. The ambience sort of made us wish for peace and quiet, but was a small price to pay for a true and uncompromised taste of Lebanon. All in all, the Pondichery Café is a great family restaurant especially if you’re dining with a large group of adventurous foodies.

Images Courtesy: Erica D’Souza
Disclosure: The writer was hosted at the Pondichery Café but all opinions expressed are her own.