Stunning Sushi Bar
Japanese Potato Salad: The tempura sakura leaf crushed into it is the best part!
Japanese Hot Wings: Wings that will totally tantalise your tastebuds.
Chicken Karaage: Served with green tea sea salt.
Tuna Mango
Truffled Lobster Bake: Delicately flavoured and delicious.
Coconut Sphere: Have a ball of a time with the melding of many tastes and textures in this marvel!

We take our seats in anticipation. The set is opulent, with a wall of origami, mood lighting, metallic placemats and gold-spattered plates. The jaw-dropping backdrop is a vista of central Mumbai as seen from the 37th floor of the Palladium Hotel. The performance we are here to witness is the unveiling of the new menu at Yuuka by Ting Yen.

The drama began in September last year, when Yuuka, meaning ‘delicious food’, started serving up its version of nouvelle Japanese cuisine. The man behind the magic then as well as now, is Chef Ting Yen, Japanese-born, brought up in Korea and Taiwan, who is famous for Oishii, his restaurant in Boston.

In the nine months preceding the opening of Yuuka by Ting Yen, he did a lot of research on local ingredients and what pleases the Indian palate. The first avatar of his menu was reportedly 50 per cent Oishii and 50 per cent based on his learning and experiments with vegetarian dishes. The second coming that we will soon be privy to excites on many levels but mainly we’re curious to know how he will innovate this time around. 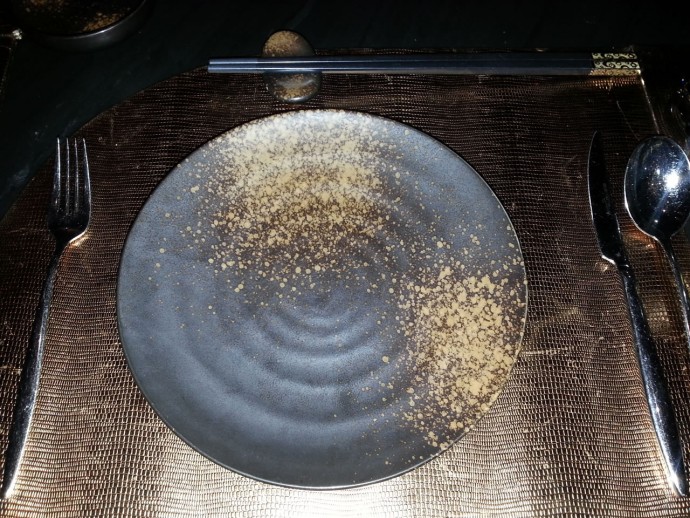 As we study the menu, we note that there are a few more dishes with an Italian touch such as the risottos and bakes, and some with a Mexican bent like the tacos. Many dishes incorporate more spicy flavour profiles and there are vegetarian options aplenty, highlighting ingredients that are more interesting than merely tofu. My vegetarian dining companion, who loves his food spicy, and has come expecting limited options that will be to his taste, is clearly pleased at the sheer variety. While we decide to save the sushi for our next visit, we notice that the popular Spicy Scallop Maki from Oishii’s menu is now making an appearance in Mumbai too.

We start off with the warm appetiser Spicy Edamame, which raises the humble soybean to an epic experience. Usually these are tender beans steamed in the pod and served with an enthusiastic dusting of salt. At Yuuka, the edamame can have a temper (hot sauce) and a tang (the zest of Japanese lemon called yuzu) like a colourful character in an opera that you just can’t get enough of. As I’m partial to truffle oil, I’m sure that I would also enjoy Broiled Edamame with Truffle Oil and Truffle Salt, the recommendation of Sandeep, our very capable steward, who guides us through the rest of the meal.

ALSO READ -   Maison Lancôme store launches at Palladium, Mumbai
Not being regular sake drinkers, we trust his judgement and order a carafe of a roasty undiluted Junmai Genshu. This smooth-as-molten-gold rice liquor, much like the music from an orchestra in the pit, is the perfect foil for the star performers that take centre-stage on our plates.

Up comes a cold appetiser… the Tofu Carpaccio. This one has slices of tofu cleverly fried so it’s crisp on top and melt-in-your-mouth inside, micro greens and a few floral additions, drizzled with Sriracha and shoyu (soy) sauce. We have fun with it, rolling it up to eat and loving how it literally pops with contrasting flavours and textures. The Japanese Potato Salad, with tofu, eggless mayo and jalapenos, though not quite as vibrant as the Carpaccio, is a cool and comforting element. The way Sandeep crunches the tempura Sakura leaf into the salad while serving, like mums do for their kids, gives the whole dish a very homey feel and a great food memory to take away with us.


Speaking of memorable moments, we’re soon having another, even more mind-blowing one! The Lotus On Fire makes a dramatic entrance, with lotus stem slices slathered in citrus ponzu dangling languidly off a shelf like Dali’s monumental melting clocks, while the coffee beans merrily toasting in the flames below infuse them with a deep, roasty flavour. The accompanying raspberry gastrique packs such a spectacular punch of tasty tartness that we are under its spell for the rest of the meal, and to be very honest, naughtily dipping other mains into it too! Next on the playbill is the Tuna Mango appetiser, three layers of superbly crafted tastes and textures – a crunchy seaweed base topped with a square of luscious Alphonso mango, over which there’s a delicious square of tuna sashimi. It’s a hard act to follow and the Karaage (boneless chicken tempura), despite being served with a unique green tea salt and grilled lime, flounders a bit in terms of taste. But the Japanese Hot Chicken Wings, coated with chili red miso, fly in with flamboyance and a sweet and fiery flavour, calling for applause.
ALSO READ -   Review: The Chinese New Year Celebratory Menu at Hakkasan: Culinary genius presented on a platter
Although old faithfuls like the Black Cod marinated and grilled with sweet miso sauce and the Moullard Duck Breast sautéed in a sake rhododendron honey beckon vociferously, I turn my attention to the new kid on the block, the Truffled Lobster Bake. This one is perfectly done and full of flavour, with the sweet and fluffy lobster meat served on the shell and sprinkled with tiny orange Tobiko (flying fish roe) pearls. We also try the Grilled Portobello with Black Truffle Sauce, which, though it’s from the older menu, is still a treat for the mushroom lover.
Since truffles seem to be the hero of the hour, we call for the Sea Salt & Truffle Ice Cream for dessert. Served with toasted hazelnuts and three unique tofu balls, two coated with black and white sesame, the texture of which takes some getting used to. While I’m not sold on the accompaniments, I find the ice-cream truly delish, the sea salt enhancing the intense truffle flavour wonderfully. Meanwhile, my dining companion is bowled over by the Coconut Sphere, stunningly presented like a large white ball with a spun sugar veil. Using liquid nitrogen and molecular cooking techniques, the sphere contains a coffee mousse, yuzu sorbet and tangy berries. Sandeep does his thing again, this time cracking the sphere and mixing up the crust with all the delicious elements inside, making for something that looks like an Eton Mess but tastes truly sublime. With the entire meal having had an operatic quality to it, it fittingly ends on this culinary crescendo.

Certainly an experience worth a standing ovation!

Note – A meal for two at Yuuka by Ting Yen, with drinks, would cost upwards of Rs 10,000.
The reviewer was a guest at Yuuka, but the opinions expressed herewith are her own.