All the knobs and switches are bespoke for the S-Class.
Nothing like getting a massage at the backseat of a Mercedes limo.
The top-notch built quality reflects on every element in the car.

Since its birth in 1972 the Mercedes S Class has been the last word for the elite to arrive in ‘style’. Over the decades the S Class has been setting benchmarks and trends for the competition to follow, or to put it simply what the iPhone is to the smartphone industry, the S-Class is to the luxury saloon market, when they make an announcement the world listens. 2013 was a year just for that as Mercedes announced the ‘W222’ codename for the 2014 S-Class. We spent two days with the S500 the range topping S Class in India and needless to say it was an absolute stunner, Mercedes has kept everything that makes the S Class great and incorporated it with cutting edge technology.

Sheer size
The 2014 S-Class is big, it’s close to 17 feet long and more than 6 feet wide. An imposing shiny grille dominates the front and sitting proudly on it, just like the old times is the automakers insignia, the three pointed star. Fluidic lines run from the blown-back shaped headlights to the boot, highlighting the elegant flow of the C-pillar while converging with the gently slanting rear end. Keeping this mammoth light on the weighing scale is the generous use of aluminium, in fact all outdoor panels even the roof are aluminium. 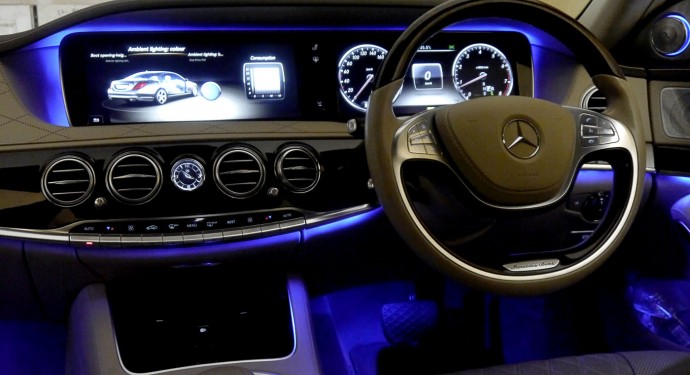 Make way for the LED’s
The new S-Class is also the world’s first car (a term you will be hearing a lot in this review) to get rid of bulbs – incandescent, xenon all of them for LED’s. Taking care of the lighting, signalling and illuminating the interiors are 490 LED lamps. They are smart too, the headlights use motorized masks to block the part of the beam that would dazzle oncoming traffic, the tail and brake lights are lit at various intensities to not blind the drivers in the rear at a stop sign. 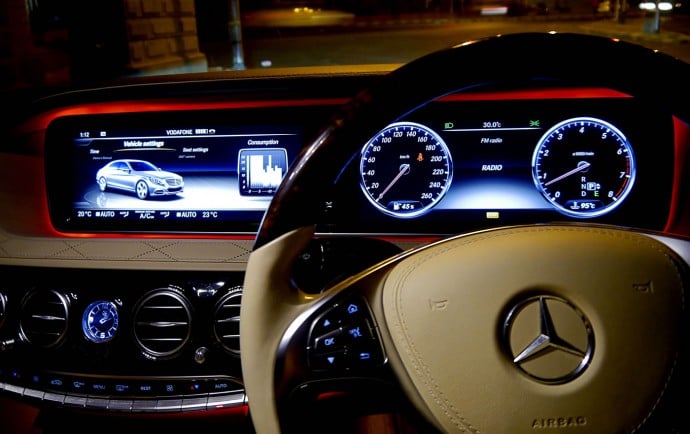 The cabin – A perfect cocktail of tech, comfort and luxury
Step into the new S-Class and it systematically takes over all your senses. As soon as you close the soft touch doors there is an eerie silence, it is the most silent car in the market sans the Rolls Royce Phantom. The cabin is an absolute visual treat, dominating the dashboard are two 12.3 inch displays which sport a resolution of 1,440 x 540 pixels, which make way for all the dials in the cabin, incidentally an elegant watch in the center of the dash is the only component which is analog. The center display makes use of dual view technology, while navigation information is displayed to Jeeves the co-passenger can enjoy watching Interstellar on DVD, simultaneously on the same display. The rear passengers get dual 10.2 inch displays sporting a resolution of 960 x 540 pixels.

Needless to say the cabin feels extremely plush with the best quality leather cleverly used with aluminium and wood. The dash itself has a wraparound shape with ambient lighting that glows from beneath. 300 LED’s are strategically placed which light up in 7 ambient colors and 5 levels brightness giving the cabin an ultra futuristic look. The cabin is cooled by a four zone climate control system with charcoal filtration. 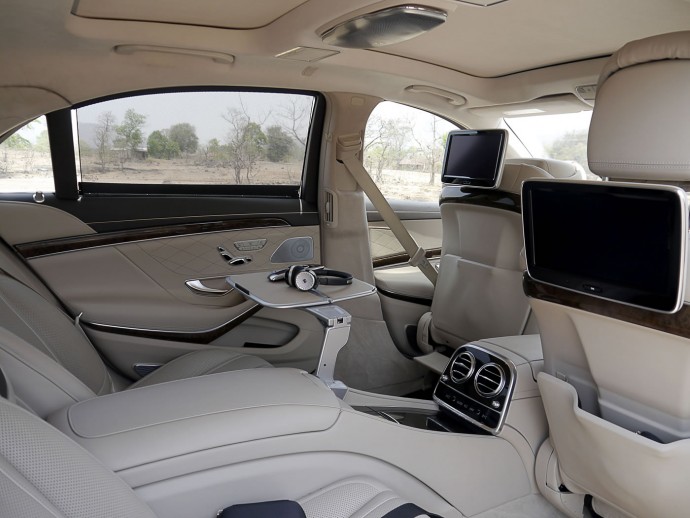 The Rs 1.70 crore question – How is it like to ride in one?
The S500 (at Rs. 1.7 cr) is quieter and cosier than your average Mumbai hotel room. Each and every element in the rear has just one purpose – ‘Comfort’. Our tester came with the ‘Executive seating package’ which replaces the three seater bench with two individual seats. Clad in the finest of leather these seats are electrically adjustable, heated and can recline upto 43.5 degrees. Being an S Class these seats also offer massages, yes you heard that right, taking luxury a notch higher 14 air cushions deliver massages including a hot stone massage. As invigorating it is, it is equally exciting. 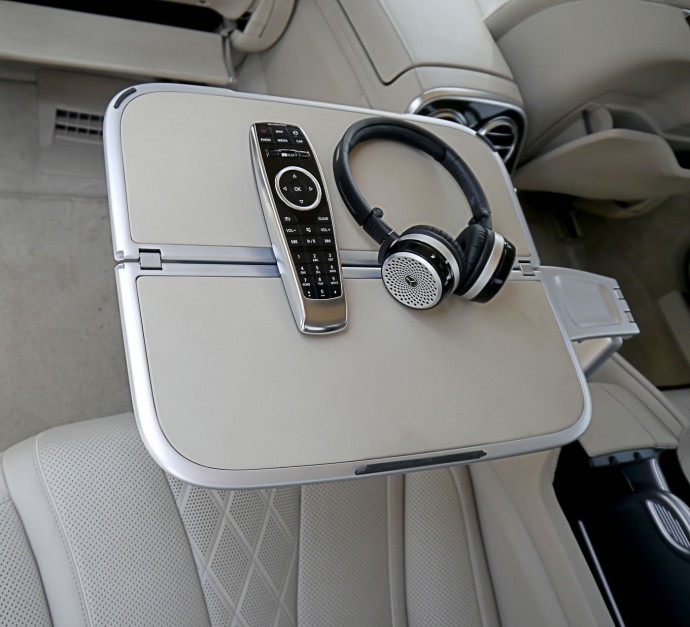 With the executive seat package the rear left seat gets cooling, once again being an S Class it does things differently. For the first four minutes the seat fans will draw in air to suck out the moisture and then reverse the flow to blow cool air. This seat reclines almost flat, while the front seat reclines enough to becomes a leg-rest for the rear passenger. LED lit cupholders cool or warm beverages while tray tables pop from the center console in true aircraft style. To keep the cabin silent more than 150 insulation components have been integrated to reduce engine, road and ambient noise..

After a long day at work there is nothing like some Mozart, a hot stone massage while watching the city lights from the panoramic sun roof on the way back home.

Even the tweeters have ambient lighting. We try out the @mercedesbenz_india S500. #Mercedes #sclass #luxury

Speaking of Mozart the sound is channeled through a 1,540 watt, 24 speaker sound system which is made by none other than the bespoke audio gurus at the Berlin based company ‘Burmeister’. There are three speakers on the headliner above as well in a bid to deliver true 3D surround sound. To keep you entertained media can be played back from the DVD Slot / Changer, SD card slot, the Internet, USB, Bluetooth, or the onboard 250 Gig hard drive. In fact each passenger can watch or listen to a different audio source using the screens and headphones. Like the earlier S-Class the 2014 model comes with remote controls that passengers can use to control almost every aspect of the car. But what’s new for this model is an app that can convert an iPhone or Android phone into a remote control.

The signature Comand interface has also been updated its smarter and easier to use. The click wheel is now surrounded by function specific buttons. 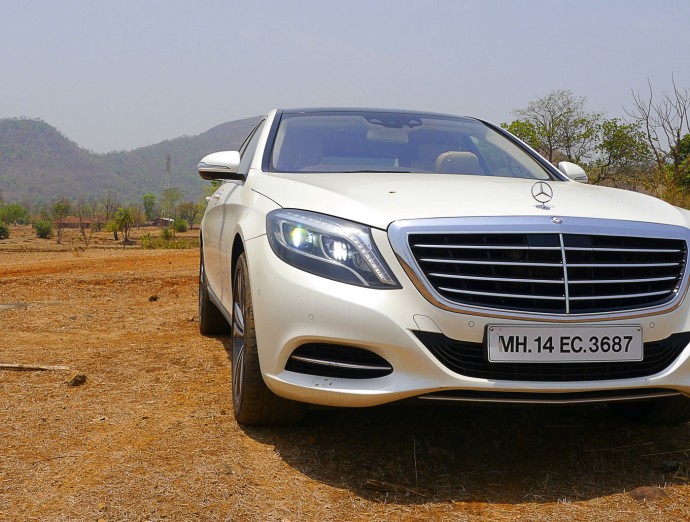 The drive –
When I first drove the 2014 S-Class I could not help but notice how quiet it was, Quiet beyond any car I had driven before. Powering the car is a 4.7 liter twin turbocharged V8 petrol that churns out 453 bhp, 700 nM of torque and can propel this 2.2 tonne chariot from a standstill to 100 kmph in under 4.9 seconds. The supremely refined engine is mated to a 7G Tronic which delivers barely noticeable gear shifts. The engine takes smoothness to another level, but at the same time press on the long accelerator pedal and the 453 ponies will breath in air and blast you ahead of the traffic. At slow speeds it is luxuriously smooth with predictable throttle blips.and negligible turbo lag. Despite its size and weight the 2014 S-Class chugs out a respectable 4.52 kms and 5.5 kms to a liter in the city and the highway respectively. Auto / Start stop functionality makes the car a tad greener, the 4.2 liter engine turns off and comes back to life without the slightest vibration.

There are no configurable dynamics but just Comfort and Sport mode to tame the engine, the latter makes the engine more peppy and the suspension a bit stiffer. After all its a car to be driven in. The adaptive air suspension is so brilliantly configured that even in sports mode the car rides smoothly than most of the luxury sedans do in comfort mode. Whereas in Comfort mode its like for the lack of a better word sitting on a fluffed ostrich feather pillow, and that too on Mumbai’s roads. 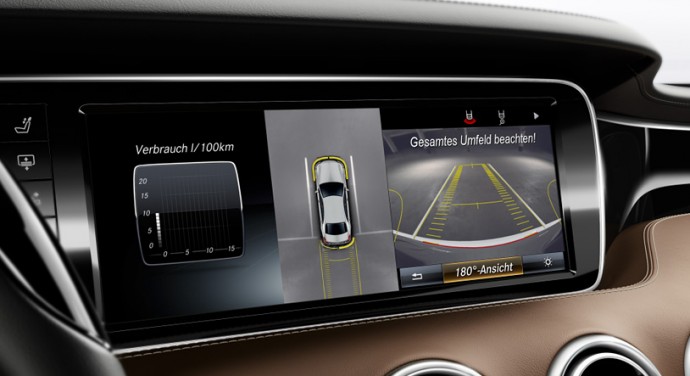 Given the sheer size, she is really easy to maneuver and drive in the city’s notorious traffic. The wood and leather steering gives a classic feel, it’s well planted and offers plenty of feedback. Parking is a breeze too thanks to the 360° camera system, which uses four camera one on the radiator grille, two on the side mirrors and one on the boot, the system uses feeds from all of them and represents the surrounding in a bird’s eye view. Its a bit confusing in the start but once you get a hang of it even parallel parking this 17 feet behemoth would be fun.

Safety –
Like in comfort the 2014 S Class does not shy away when it comes to safety as well. The car comes with 8 air bags, adaptive headlights, Night view which detects humans and animals, PRE-SAFE impulse which pulls away the front passengers from the impact and deeper into the seats by their seat belts, reversible belt tensioning, belt bags (airbags in seat belts), Attention assist, ABS, EBD, and more. 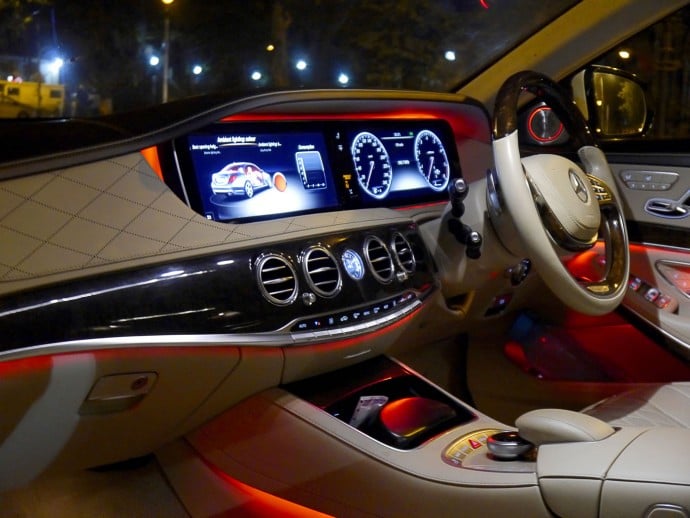 What did not come through –
Unfortunately the best feature of the 2014 S Class will not be made available in India. Its called Magic Body Control and here is what it does – Using a stereo camera fitted behind the windscreen it scans the road 15 meters ahead, maps it and then adjusts the adaptive suspension to deal with the obstacles ahead. For eg – If there is a bump ahead the car exactly knows when the front and rear wheels are going to hit the impact, and pulls each damper up then pushes it down to keep the body flat. This would do wonders in our roads.

Along with this there a host of other features which we will have to do without – Distronic Plus – A lane assist system which adjust the steering torque so you stay in the same lane and take turns easily, BAS Plus which alerts the driver for an impending collision and adjusts the brakes accordingly, Pedestrian detection which detects pedestrians in front of the vehicles. There is also auto park which detects a parking spot and parks the car automatically and adaptive cruise control which follows the car ahead,unfortunately they all make use of radar based sensors and make use of certain frequencies which are prohibited in India by the Armed forces.

Something that is not banned is the Active air perfumer – .A system which dispenses perfumes at regular intervals so that you dont get used to the smell. Interestingly the fragrance molecules are not transferred to the interiors or your clothes.

Should you buy one?
Standing neck to neck with the 2014 S Class in the premium luxury sedan segment are the Audi A8L, BMW 7 series and the Jaguar XJ. All cars in this segment have powerful engines, fine woods, hand-sewn leather, premium entertainment systems, signature technologies, but it all comes down to blending all these together and Mercedes has surely hit the sweet spot with the S Class. As exciting it is to drive one it is more pleasurable to sit in the back seat. There is also the S350 a diesel powered lower trim on the offering. if you want the most technology, styling, safety, comfort and entertainment then the S Class is the way to go.