There’s a fine line between ‘futuristic’ and ‘bizarre’ and not many automobiles in the past have managed to stick to the balance without falling over the edge. Very often, cars end up being over-the-top futuristic or just too bizarre to be driven around town. That’s just one of the few things that sets the BMW i8 apart. Though this car looks like it has been plucked out of a sci-fi thriller, the i8 still manages to work extremely well even when driven around the neighborhood for not-so-adventurous escapades.

There are many things that make this supercar different from the rest of its peers. Designed to keep torque-thirsty aficionados well-pleased, the BMW i8’s electric motors make sure you touch break-neck speeds in a matter of seconds. The car touches the 100kmph mark in a meagre 4.2 seconds and does so with an economy of roughly about 43kms per liter! If that, and the car’s sleek and well-cut edges still aren’t enough to please you, get a hold of this. The BMW i8 doesn’t roar or give out blood-curling whines while being pushed to its limits. It is silent enough to make the sneakiest cat seem noisy. Also, the fact that it uses electric motors means that the i8 manages to deliver oodles of torque, without supercharger lag. 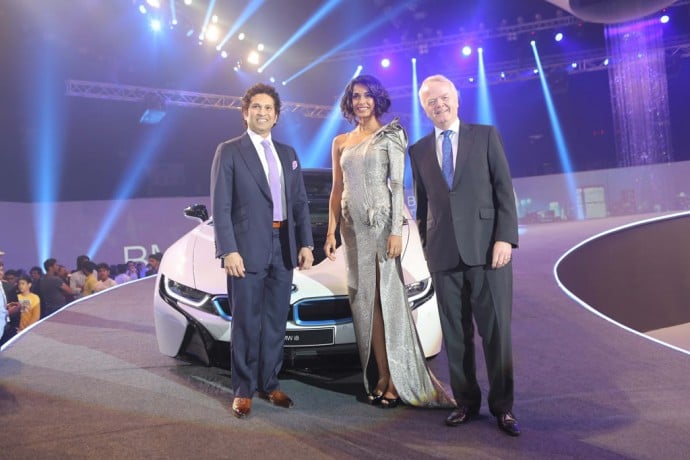 Development of this one-of-a-kind car began in 2008 and the German automaker has worked tirelessly to bring this concept to the assembly lines. The car uses a combination of the BMW eDrive technology and a BMW TwinPower Turbo 1.5-litre, 3-cylinder petrol engine. Another striking feature of this car, apart from the fact that it’s laden with LEDs to give it its mysterious glow, are the revolutionary scissor doors that are made from a combination of aluminum, carbon and thermoplastic. The BMW i8 is also capable of being charged at home, using a standard electrical socket, which makes this supercar evermore practical and user-friendly. Launched officially by BMW on the 18th of February 2015 in India at an event in Mumbai, the i8 redefines plug-in hybrids in a way that’s not going to make this car seem like just a passing fad. The i8 is available at an ex-showroom price of Rs. 2.29 crores.