At a first glance, built just beyond the Baga Bridge, Acron Waterfront seems underwhelming, at best. Designed by celebrated veteran urban conservationist Brinda Somaya, the hotel replicates Goan villas with a contemporary twist, in a subdued shade of mustard. One can’t help but question why the resort won The Best Boutique Hotel 2018 award in Goa and was rated as the sixth-best on a nationwide search. Time will tell… 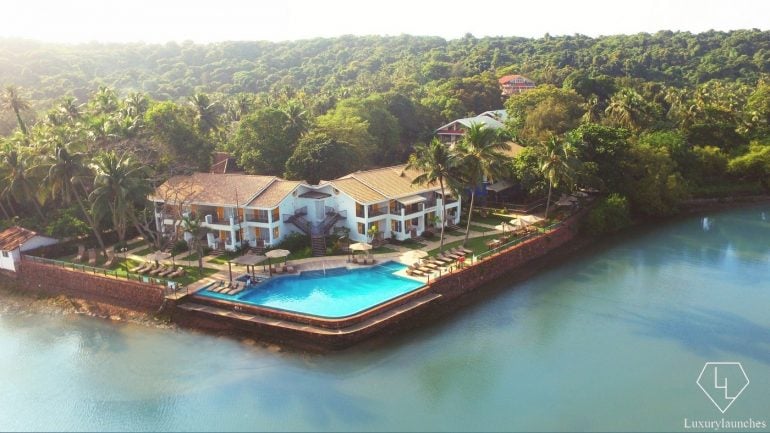 Even the interiors are tasteful but minimalistic, as opposed to the feisty kitsch that would clutter a typical Goan villa. “Working with the space constraints of a small plot of a boutique hotel proved to be a challenge,” says Somaya. “I had to create a feeling of intimacy by layering the space, each suite has an individual staircase and verandah despite being compact. An architect must take into account the period and geography of the premise, every minute detail of the Acron Waterfront reminds the guest that this is Goa, right from the spiral handrails that support that stairways to the colour palette that spruce the façades. I deliberately kept the hues subtle rather than resorting to the garish plasticated sheen that define the modern city.” 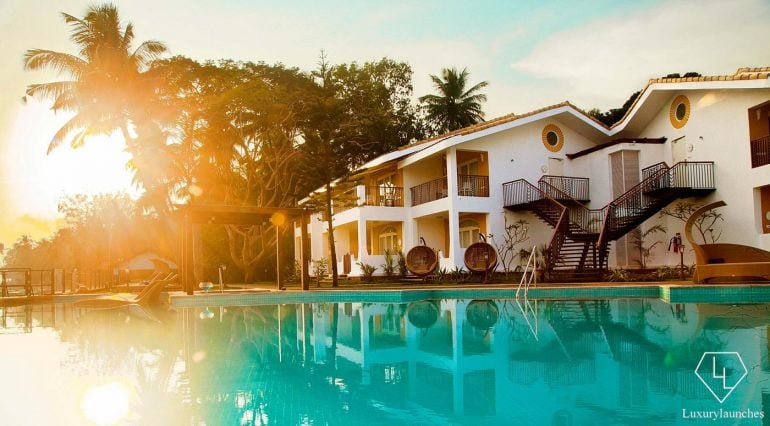 By The Bay: Boutique, Bespoke
To truly comprehend the unraveling beauty, sip some champagne at sunrise at the infinity pool. This is Goa; champagne before breakfast is in vogue! The azure infinity pool merges with the banks of the Baga river, with mechanized boats docked at the jetty. Sure, every other luxe lodging in Goa opens on to its own private beach but the Acron WaterFront is built on a delta. Follow the banks down to the backyard of the hotel and the Baga river meets the Baga Beach. Triangulated by a river, a sea, and a Baga bylane, the hotel is discreetly juxtaposed on a peninsula. 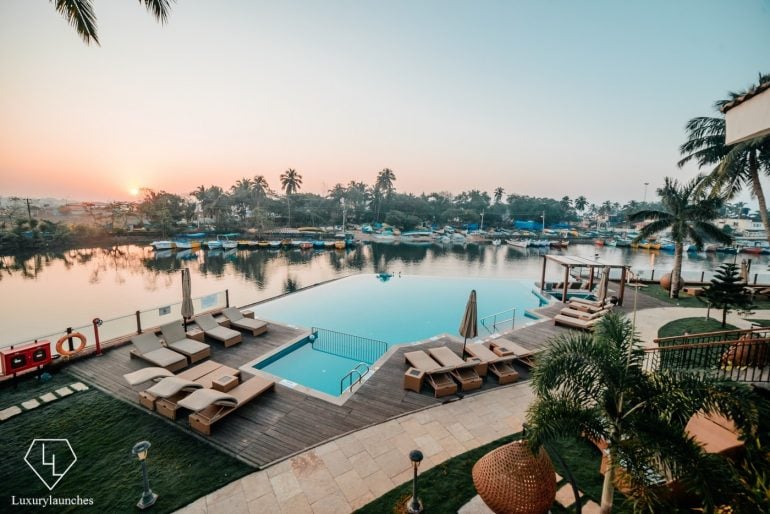 Still, you’re in the heart of Goa. Just a stone’s throw away from the night markets and Casino Palms, the hip late night hotspots like Britto’s, LPK and Cabana’s, yet isolated enough from the touristy trash that is invasive to North Goa these days. 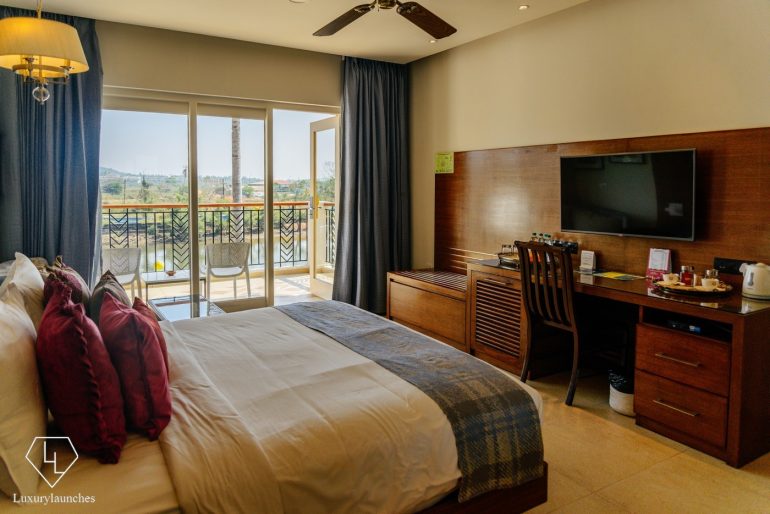 You can either choose between the 47 suites that populate the double-storey complex–which in Goa qualifies as high rise–or check-in at the private property across the street, that has eight penthouse suites, each with three private bedrooms, a den with a sprawling verandah. Somaya gets edgier here, the beach cottages here are in a bold scarlet and cobalt blue. Detox from the sensory overload coming your suffocating smartphone by trading it in with a walkie-talkie that the hotel offers you.

ALSO READ -   Spend your summer at the Lyceum Alpinum Zouz, St. Moritz with their Summer Camps and Junior Golf Academy

Market to Table
Breakfast at the standalone fine-dine, ‘River Restaurant by Cyrus,’ is a buffet with select à la carte offerings. At Pervin’s insistence, Chef Todiwala’s gregarious wife, I eat the Akoori Pau, a Parsi staple, which is dolloped with chunks of chorizo. For those of you who aren’t aware, the celebrity chef Cyrus Todiwala has been knighted by the Queen of England, for enriching the United Kingdom’s food scene with authentic Indian flavours. ‘River Restaurant by Cyrus’ is the only Indian outpost to Café Spice Namasté, Mr. Todiwala’s Kitchen and The Park Café: all accolade-winners in London. In fact, Cyrus even curated Queen Elizabeth II’s and King Philip’s Diamond Jubilee celebratory luncheon. Given his dignified stature, even the term ‘Celebrity Chef’ seems passé.

“Did you know the Egyptians first commissioned the Arab Jews to sail to Kerala to procure turmeric, a vital ingredient needed to mummify their dead?” Or “When Vasco Da Gama sailed to India: all he had on his ship was leftover pork and wine gone bad. What was concocted is immortalised in Goa as a popular dish called Vindaloo.” The Todiwala’s immerse in the food history of every dish they personally serve, their photographic memory is as sharp as their kitchen blades.

If you’re too hungover from the night before, Todiwala delegates one of the sous chefs from the galley to personally come to your penthouse suite, note down your breakfast order and serve you piping-hot breakfast. “85 per cent of our revenue comes from the sale of our rooms but 85 per cent of our guest’s experience is formed outside the room. Our late rising guests appreciate that a lavish hot is served until 1 p.m.” says the erudite Joseph Britto, the co-owner of the boutique hotel and the realty tycoon helming Acron Developers, Goa’s largest luxury apartment builder. By his own admission, Britto, an licensed doctor who practiced in London but quit medicine because the family business needed him more, is not a party animal like most Goans and doesn’t remember being drunk his entire life. Still, serving breakfast beyond noon was his bright idea! 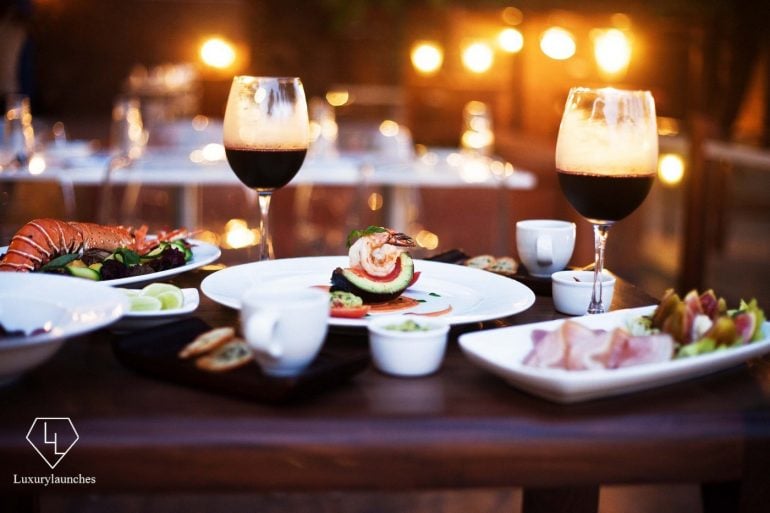 Cyrus and Pervin handpick their fish from the fishermen’s catch at the Mapusa market, and you’re most welcome to join in and let them know your heart’s—or stomach’s desire. Depending on the day’s catch: calamari, lobster, rare river fish, crabs or king prawns are yours for the tasting. The chef couple check how you’d like your seafood, curried or grilled? The writer recommends that even though the fare is cosmopolitian, stick to the Goan-Portuguese or Zoroastrian dishes, the turnout is stellar and historically fabled!

Impeccable Hospitality
Fairy lights glimmer at the restaurant’s alfresco seating area, indicating sunset, complemented by the flickering lights from the boats out at the river. An open bar pops up on the lawn. It is Happy Hour but the guests are happier! A live band belts out some popular English hits from the 90’s.The party extends to the jacuzzi outside the Sitara Spa, where patrons contemplate whether they should get a deep tissue or a Signature Sitara Spa massage, while they revel in a hot soak with a chardonnay. Cyrus hosts an open-air masterclass while guests lounge lazily on the grass, listening intently to his engaging anecdotes. Joseph and Pervin mingle with the guests, making sure everyone is at ease. 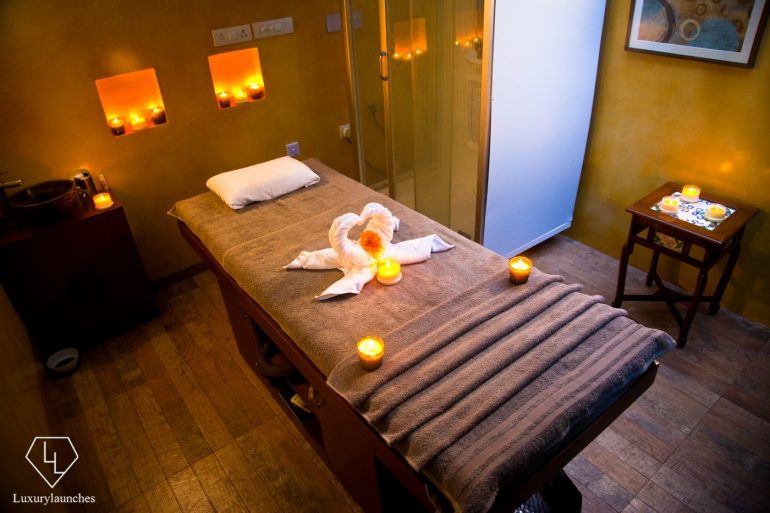 As the evening mellows into midnight, Brinda’s mustard villas are almost luminescent in the afterglow. The attentiveness in the hospitality and the carefully-crafted experiential is what makes Acron WaterFront numero uno in India’s party capital.

Note– The critic was hosted by The Acron Waterfront Resort but all the opinions expressed herewith are his own.