From the Sula fest that turned 10 years to the Benetton and Nirav Modi’s ad campaign to jewellery to art shows to a chat with Sonam Kapoorvalentine day dishes we bring you the world in this post. 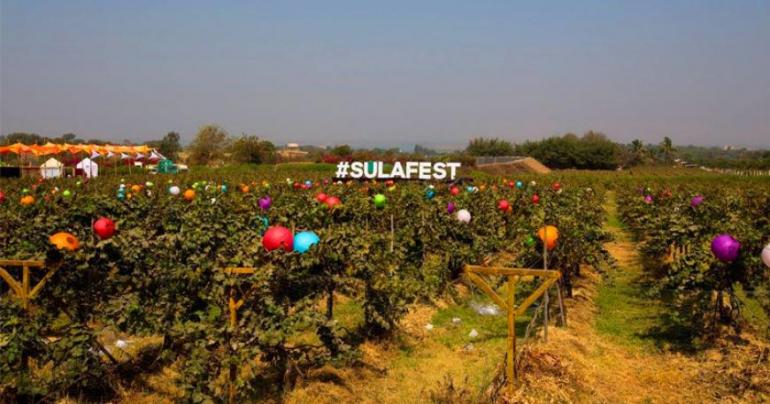 Sula Fest turns ten
Sun kissed vineyards tucked away at the base of the Sahyadri hills in Maharashtra seem to slowly wake up to a flurry of revelry for three days every year. The soft-spoken Rajeev Samant, quit his job at Oracle Corporation after his education at Stanford University and set up Sula Vineyards in 1998, conceived Sulafest 10 years ago. A decade after its inception, the festival is quite easily one of the most fun wine and music festival in India. The vibe is vibrant, the mood languid, the feel hedonistic.
Sulafest means different things to different people. For music lovers, three stages are set up for artists from across the globe to jam, experiment and raise the adrenalin of thousands of rock, jazz and EDM fans.
To get into the groove, you could pick up a hat, a scarf, a feather earring, a pair of sunglasses or even a new dress from the bazaar set up on the side and when hunger strikes, food stalls set up by top names like Little Italy, Mainland China, Maroosh, Bombay Food Truck, and Busago dish out pizza, risotto, biryani, burgers, noodles, ice-creams, cakes, savouries, you name it. And then there is the wine. In the restaurants, the stalls, and the tasting room.

The new Benetton ad fights for equality of women
We’re living in times that are volatile, especially when it comes to gender discussions and the subsequent fight for equality. Amidst all the noise and sexism, fashion brand United Colors of Benetton seems to have seized the issue by its collar. Benetton recently launched its campaign #UnitedByHalf, fronted by Kalki Koechlin, to address gender inequalities and issues related women empowerment that are rampant in today’s day and age.
The ad begins on a rather strong note with the narrator stating, ‘we’re not the better halves or worse… definitely not the weaker halves setting just the right tone for the crusade. In fact, the entire campaign is punctuated by a combination of a strong narrative and equally striking visuals.

IWC’s brand ambassador Sonam Kapoor talks on watches, style and memories
One of the leading actresses in Bollywood today and a true-blue fashionista, Sonam Kapoor has earned every accolade to her credit, be it for her style or her movies. Apart from being written extensively about for her astute fashion sense, she’s even won awards for her movies—Star of Tomorrow in 2008 (at Stardust) and her recent hit Neerja. She’s donned various hats with panache and IWC Schaffhausen announced Kapoor as its brand ambassador. She speaks candidly on watches, style and her childhood memories.

Sea inspires two of Ganjam’s latest jewellery collection
Ganjam Boutique has unveiled two jewellery collections, Sea Life and Song of the Sea, at its store located inside the Taj Mahal Palace Hotel in Mumbai. Both the ranges are defined by diamonds and gemstones like blue topaz, tanzanites, white moonstones, black spinel, and sapphires (to name a few), that are put together into a contemporary design using 18k white gold. All these gemstones are sourced from across the globe.
While both the collections are inspired by the sea, the Song of the Sea range bears references to the waves, and the Sea Life brings to life majestic creatures—like fishes, crabs, sea horses—present within the waters.
The Song of the Sea is a 24-piece jewellery collection and the Sea Life, 20 pieces.

Pudole’s curates architect Rooshad Shroff’s latest solo exhibit
Titled 15,556 and curated by Pundole’s for architect Rooshad Shroff, the exhibit brings you furniture that yokes together handcraft, technology, and design to be art and instrument in equal measure.
Bringing craft from souvenir shops into the living room, Shroff goes about reinventing the wheel when it comes to décor. Marrying technology and handicraft, the upcoming exhibit, the preview of which will be held at the Bikaner House on 17th of February, will showcase skills he holds the global patent for.
The exhibition, comprising 26 one-of-a-kind pieces, displays techniques that combine embroidery with wood, colour, sanding and marble carvings respectively.
Bringing the focus back on craftsmanship, the number 15,556 is indicative of the total number of man hours that went into making the collection. Made by hand, most of the pieces are dismantle-able and don’t depend on screws and metal fasteners, and often the wood joinery technique becomes part of an extended design.

Behind the scenes of Nirav Modi’s ad with Siddharth Malhotra and Priyanka Chopra
Diamantaire Nirav Modi has unveiled his latest advertising campaign, Say Yes, Forever, featuring actors Priyanka Chopra (the recently-appointed global brand ambassador of the brand) and Sidharth Malhotra. The campaign, celebrating the beauty of the brand’s solitaire diamond engagement ring, was released on Valentine’s Day. A sneak peek behind the making of this campaign.
The ad film shows a nervous Malhotra planning a dreamlike proposal—complete with a rooftop dinner date and live music—for Chopra. All’s well until an irate Chopra arrives, resolving to stop saying yes to people. Taken aback at first, almost dropping the plan to propose, Malhotra eventually wins his desired yes from Peecee, thanks to his affable charm.

Instafood – for those committed to deliciousness
Now we’re not judging your flowers and chocolates here, but we’re straight up addressing those who believe more in the power of a bouquet of nuggets over those roses.

With Valentine’s Day just gone by, we couldn’t help but present to you a round-up of dishes dedicated to the day of love!
From fruits cut in the heart shape to white chocolate popcorn to heart shaped pizza to heart shaped pancakes there is a
Variety of dishes to show your love