It’s the newest fine dining destination in the city. At first glance, it brings to mind the traditional Chinese restaurants of our childhood where we were first introduced to hakka noodles and bacon-wrapped prawns surrounded by paper lanterns and dark wood in dim red lighting. But then we look beyond the Beijing bling and see what makes this all-new eatery the cutting edge culinary haven it is. The minute we enter through those gorgeous doors that resemble the typical red-lacquered traditional ones, we can hardly believe we are still inside High Street Phoenix. Lightning flashes across the ceiling and the mood is exciting – fishing sampan meets luxe opium den. The Typhoon Shelter is pegged to be the hot new refuge for Mumbaikars adrift in the social whirlpool seeking a calm harbour. 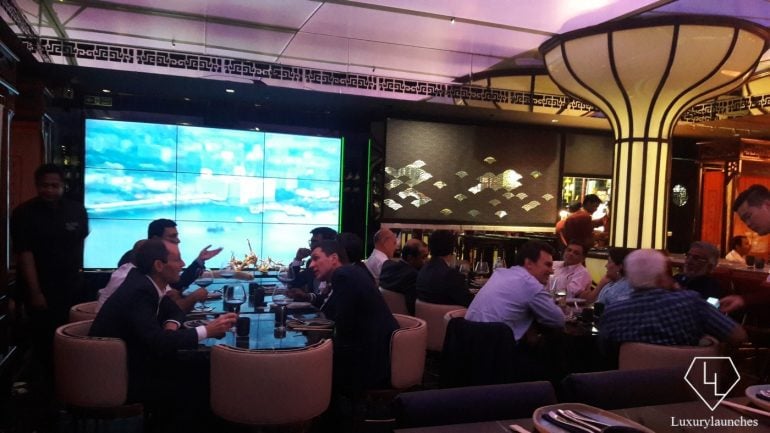 For us, it’s a revelation and a lesson in geography, history and culture all rolled into one. Now, if you’ve been to Causeway Bay, Hong Kong, or one of the many typhoon shelters in the region, you’ll know exactly what they’re talking about. These places that originated as sheltering stations where vessels from all over would dock when the weather threatened, soon became a potpourri of diverse people that shared their passions such as food, drink and music as they waited out the storms. Though individually they were merely ships that passed in the night, collectively they created a culture that has gained cachet as a distinctive one.

Ramit Mittal, whose Pizza Express empire now encompasses a bevy of high-end gourmet ventures, tells us we’re going to find a culinary experience that is fabulous yet familiar. He says that just as in the original typhoon shelters, the mix of Chinese boat people from across many regions resulted in a unique cuisine that was palatable to the majority, this Typhoon Shelter too, has food that will appeal to many, veg and non-veg alike. With Hong Kong celeb chef Christian Yang visualising the menu, and eight stunning desserts designed by Solanki Roy, the inimitable Gaggan Anand’s long-standing pastry chef, the restaurant definitely has the thunderous arsenal needed to storm the bastions of Mumbai’s best.

ALSO READ -   Review: A culinary extravaganza at The Quarter

The beautiful bar, featuring sea green shelves that reminds us of rolling waves, has a huge selection of rice wine (yes, sake had its origins in China, apparently) and some unique mixology that fuses calming elements with fresh floral ones. Our Chinese Puzzle cocktail, mildly sweet with bitter tinges, is just what we are craving and the handmade ice-cube in it, shines clear like a quality diamond in the concoction that contains lavender and gin, dusted with galangal and finished with orange liqueur. And then there’s the Drunken Rose, a combination of wild rose macerated in vodka, mixed with scrumptious Umeshu (Japanese plum wine) and sweet vermouth. It’s like heady petrichor (the aroma of wet earth after the rain) distilled in a glass. Their extensive sake menu also beckons us to pay a return date. Perhaps we’ll be like the sailors who kept going back to Aberdeen’s colourful cloisters once they got a taste of the typhoon shelter life!

This time, we sample a variety of small plates of which we particularly enjoy the red-braised pork belly spring rolls and the Craboli, a soft-shell crab bao with crab aioli, which turns out to be more like a slider. The wild mushroom and edamame dumplings with a hint of truffle oil and finger millet skins are delicate and well-seasoned. The Taro Nest with chestnut and taro root have a wonderful richness of textures that our vegetarian dining companion relishes.

ALSO READ -   With over 200 shots and classic comfort food , Zorawar Kalra’s YOUnion is the millennial dream in motion

Of course, the hottest tickets for seafood lovers are the much-touted fiery Typhoon Shelter crab in a fermented black bean sauce and the Typhoon 8 Pomfret in bird eye chilli, both simply spectacular. Even the humbler options such as the XO-flavoured seafood fried rice with lobster and smoky scallops are sensational. While the desserts all sound delicious, we go for the much-recommended Zen, which gives us a little lesson in accepting the rough with the smooth as we have to figure out which of the ‘stones’ are inedible and which ones have that gorgeous gooey vanilla-caramel inside.

Guessing games apart, this stylish and expensive restaurant does seem like the new direction for Chinese in the city, offering comforting flavours yet a far cry from the same old, same old. The intimate setting of the booth and the inobtrusive yet attentive service make it especially nice for date night, family time and even a quiet business dinner to impress an important client. That’s the thing about typhoon shelters, they welcome everyone in from the rain!

Note: The critic was invited by the Typhoon Shelter but all the opinions expressed herewith are her own