Otherwise known for vanilla designs, rock sturdy chassis and relentless workhorsery, Volvo has surprised this generation of motor-heads with the XC90 SUV. This handsome Swede has unexpectedly shaken the very senate of luxury SUV regulars from across the globe by offering not just good looks and comfort but a performance metric that could well be the next benchmark for potential buyers. 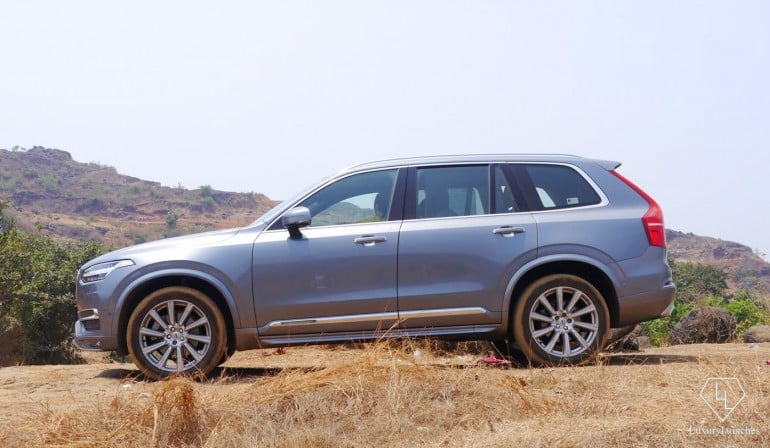 Exhilaration of the new, inspiration of the old
Many wondered how the new Chinese ownership would impact the way Volvo introduced its machines. Much to our satisfaction the XC90 bears witness to a keen attention for detail and also carries with it the tradition of dependability that the brand has been synonymous with. It trumps the XC60 in many aspects and makes for a car that fits well in the 2016 market. In India, it is available in two avatars, the 64.90 lakh Momentum and the higher-end 77.90 lakh Inscription model, we try the latter. 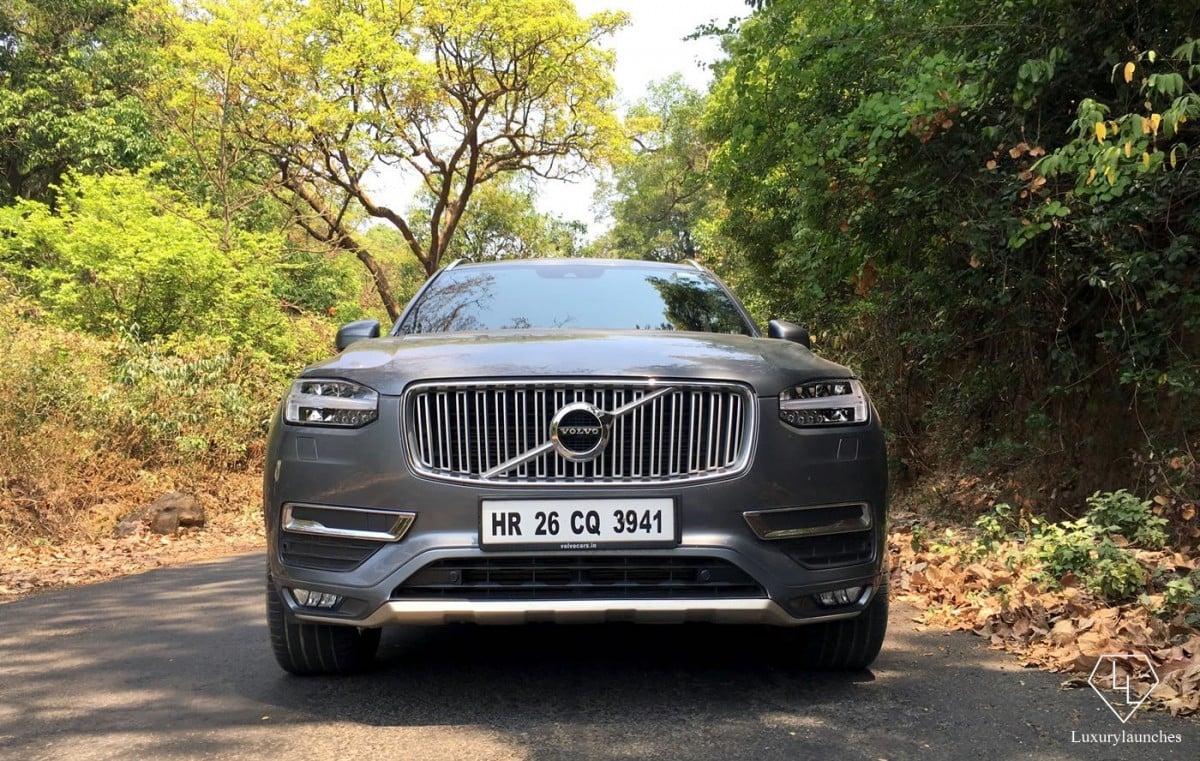 Domineering yet nimble
It’s taken over a decade in coming but time has shaped the XC90 to shed the boxy avatar that its predecessor once donned with much pride. It sweeps most of the muscle and bulk under the proverbial carpet while pitching its unforgivable aggressive look. That front grille and the daytime running headlamps inspired by Thor’s Hammer herald the approach of this imposing SUV. While the rear design tones the aggression down, the flanking taillights and two exhaust slots speak about a true performer. The Inscription trim sports 20-inch wheels, which are rimmed with 275 section rubber are accommodated under gracious wheel arches. The lower-end Momentum sports 19-inch wheels and misses some chrome finishing and bumper-integrated exhaust slots. Another inspiring design aspect is how the air intakes are shut off and made to open only when the engine begs cooling. This enhances the car’s aerodynamic efficiency and is a major fuel-saving detail. At 5 meters long, the XC90 wouldn’t pass as a giant on the road thanks to the finely chiseled Swedish design that camouflages the bulk effortlessly. 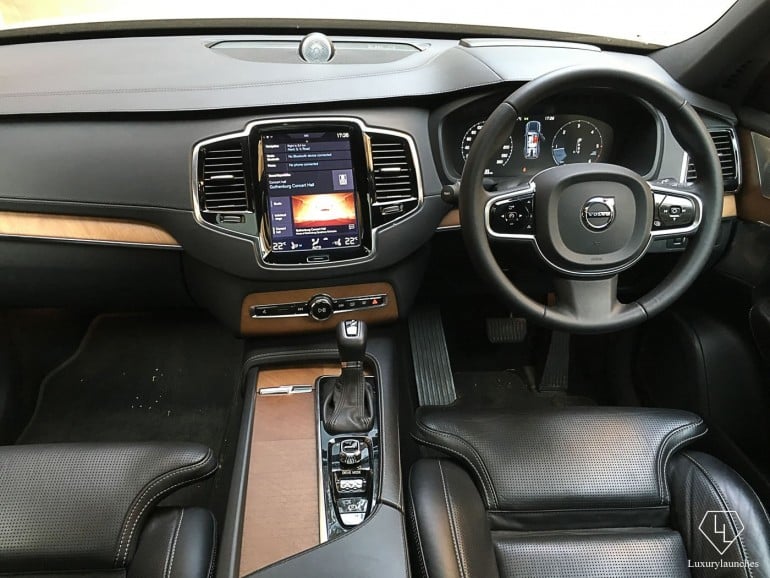 Minimized clutter, maximized comfort
The dash is clean a devoid unnecessaries. A large 9-inch touchscreen display fits into the dash of a cabin that is made to foster comfort and cut down the number of buttons on the dash to just 8. It has large windows, a larger sunroof and front seats come complete with thigh support, side bolstering and are designed post consultation with orthopedic doctors! The middle row is blessed with reclinable seats and 2-zone climate control, which can also be controlled via the aforementioned touchscreen. Premium leather seating, charcoal filtered air conditioning and four temperature zones . Talk about being spoilt. Volvo being Volvo and the tower of safety in the automotive industry, have created a special center seat that can be used by grown-ups in its stock setting but can also be elevated to seat a child, which according to the brand is safer. Boot space can be increased if the third row is folded down as is the case in most 3-row specifications. Everything you see is made with the luxury aspect of the XC90 in mind. The Nappa leather is supple and tangibly very comforting. The interiors are a mix of materials from wood to leather to aluminum and in some rare necessary cases, high-grade plastic. 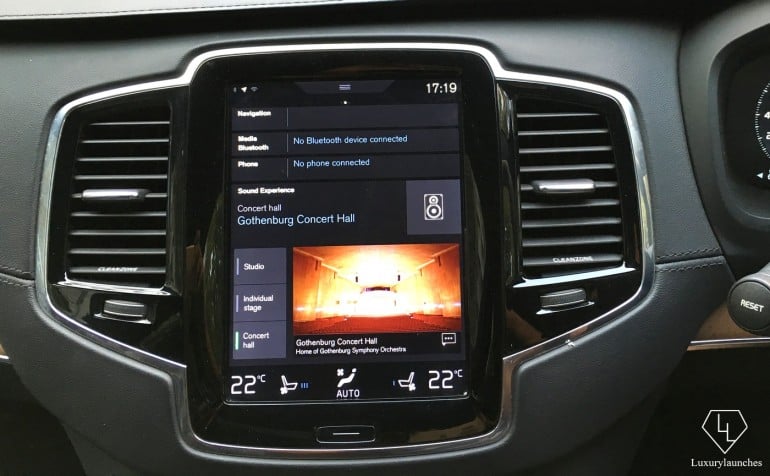 The best sound experience on four wheels
It may seem a bit of a stretch when we make this claim but denying this would be a crime. The XC90 sports one of the best sound systems not in the segment but in the industry. The 19-speaker Bowers and Wilkins audio system is perfectly tuned to the car’s acoustics in an industry first its sub woofer is integrated into the body of the car and not in a separate box, thus delivering clear low verb sound.. And it doesn’t stop at that. It even goes on to produce the sound you could expect in a concert hall, with every pin drop captured and delivered in blaring clarity. You have complete control over the audio output parameters including the reverb, thanks to presets that shape the sound the way you want it to be heard. The tube tweeter located at the center of the car is a first and bears testimony to the novel innovation that offers optimal clarity in output to the listener. It does simulate a concert hall where all the sound is nearly as clear as if it were acoustically delivered straight to your ears. 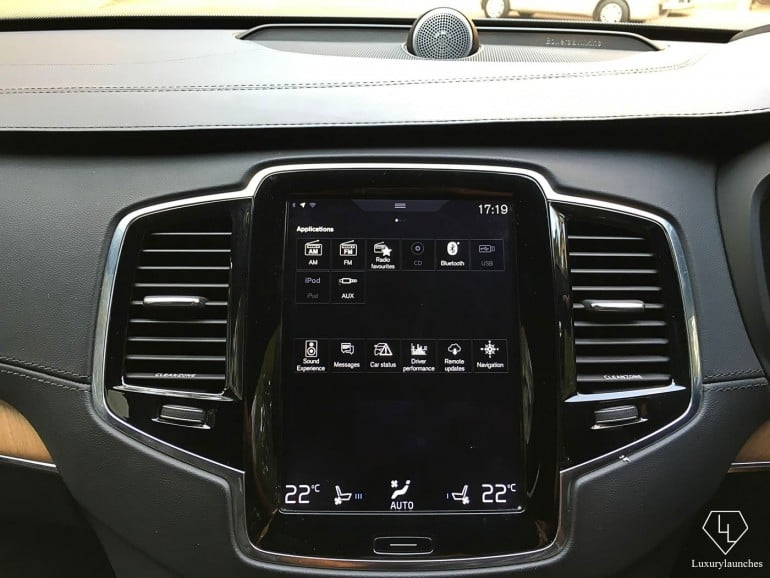 That screen called ‘Sensus’
It’s 2016 and a touchscreen interface to communicate with your car and controls is commonplace. The ‘Sensus’ touchscreen panel on this one is very similar to the iPad and handles everything from music playback to the air-conditioning. The navigation control is also taken care of right here (duh!) and all it takes to enter any of the modes is a simple touch (with your naked finger or gloves) on the main panel. While India doesn’t have the best roads to test the lane-changing, the parking assistance can be something a bunch of us could do with. 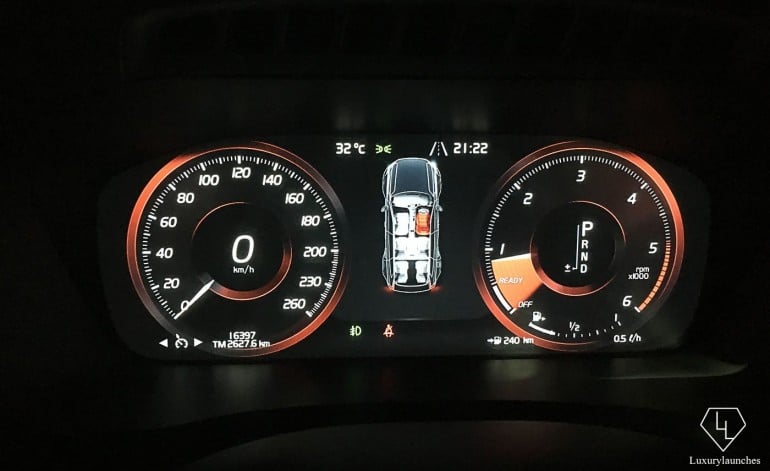 Feels like you’re gliding
While the specification sheet tells of a modest 2-liter, 4-cylinder diesel engine that promises 225bhp and 470 nm torque, the drive experience is far superior than those who sit on the leaderboards of SUV engines. The twin-turbo setup makes up for the missing 6-cylinder powerhouse. The silent, smooth drive offers linear acceleration that is better than any other drive in this space. The super and turbo charger puts even the V6 3-liter German engines to shame by offering agility even at slow speeds. Something that is more than welcome on Indian roads. The XC90 glides effortlessly over small and medium potholes and is noticeably more silent than the Q7 while doing so. Users can toggle the impressive little driving mode button to select from a choice of convenient modes such as eco, comfort, off-road, dynamic and the bespoke individual driving experience. 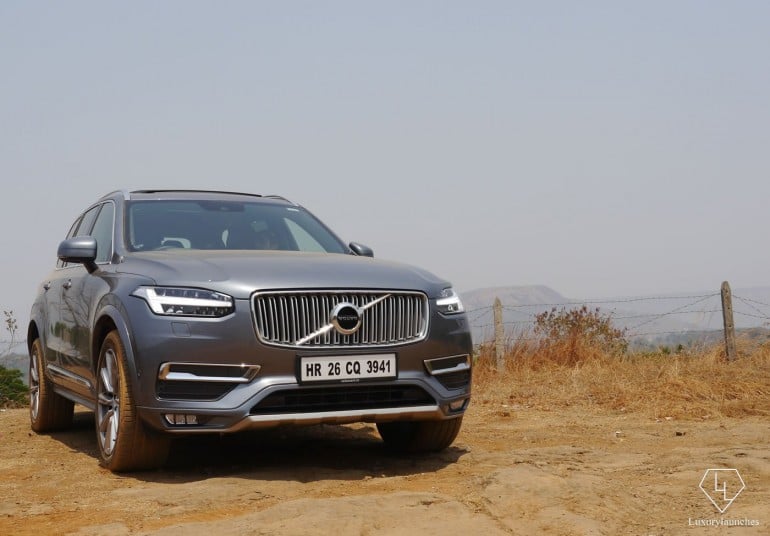 Verdict – It’s made with you in mind
You couldn’t say this about many cars today, but this gentle Swedish brute truly care about you. With details on finer aspects such as self-adjustable air suspensions to make picking bags from the boot more convenient to creating a bespoke driving experience that only seasoned Indian drivers could tell of, the XC90 comes in as a game-changer. It supersedes its German counterparts solely by creating for itself the ability to impress with a mix of drive satisfaction and true-to-its-name luxury. It is a beautiful car and believe us, that’s not something we call SUVs all the time.