The luxury hatchback segment in India was virtually non-existent just a couple of years back. Mercedes was the first automaker to take the bold step and venture into the uncharted waters by launching the A-Class. It was soon followed by Volvo with its V40 Cross Country; however, BMW didn’t want to fall too far behind and launched the 1-Series in September 2013. Majority of the buyers looking for an entry-level BMW luxury car question the need for anything smaller than the BMW 3-Series. Looking at the spec-sheet alone, you might not find the 1-Series very practical and value for money either. In fact, outside India, where hot-hatches are very popular, especially in Europe, BMW was criticized for introducing the small sized 1-Series. However, the first-generation 1-Series debunked all the criticism by posting an impressive 1.2 million global sales over its eight-year model life. To which you might ask, how did it manage to become so popular? It’s front engine/rear-wheel-drive set-up with a near 50:50 weight distribution and low centre of gravity offers exceptional driving dynamics. In fact, it is one of the most fun-to-drive cars we have reviewed in the recent past and its relatively small size and sprightly engine makes it perfect for the Indian conditions. The combination of enjoyable driving experience and economy is its biggest selling point. In India, there are two engine options used across three variants that make up the 1-Series range. It includes a 1.6-litre four-cylinder turbocharged petrol available only in one base variant in the form of 116i and 2.0-litre turbo-diesel (118d) offered in three different trim levels. We had the range-topping 118d Sport Plus with us for two days as our test car.

The BMW 1 Series is swathed with design elements that are typically BMW, both from the outside as well as on the inside 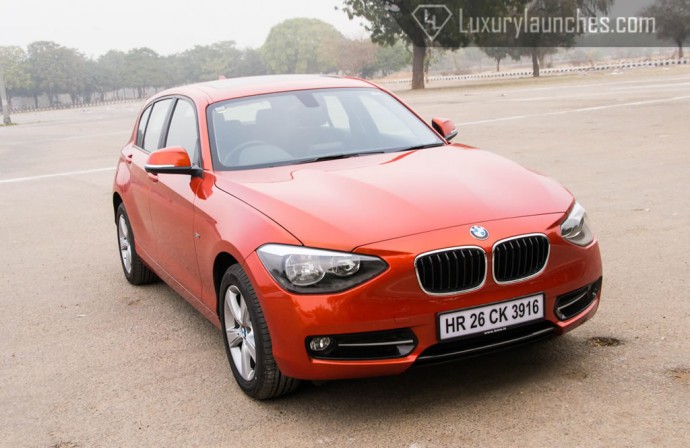 Design and styling
If the BMW X1 that we reviewed recently is the most understated offering in the Bavarian automaker’s range, the compact sized 1-Series closely follows its crossover sibling. To put it in simple words, the BMW luxury hatch isn’t the best-looking car of the BMW range, or even in its segment. The Mercedes A-Class is far superior in terms of styling and design. The BMW 1 Series is swathed with design elements that are typically BMW, both from the outside as well as on the inside. The Profile of the hatchback looks out of proportion and is not aesthetically pleasing to the eye. However, on the inside, it is a different story all together. Despite being a compact hatchback, the cabin feels comparatively big and airy, which clubbed with the best driving position and comfortable front seats thoroughly impressed us.

The wide front and rear tracks give the 1-Series a more masculine profile, which along with the pronounced bonnet and deeper front apron certainly add more road presence 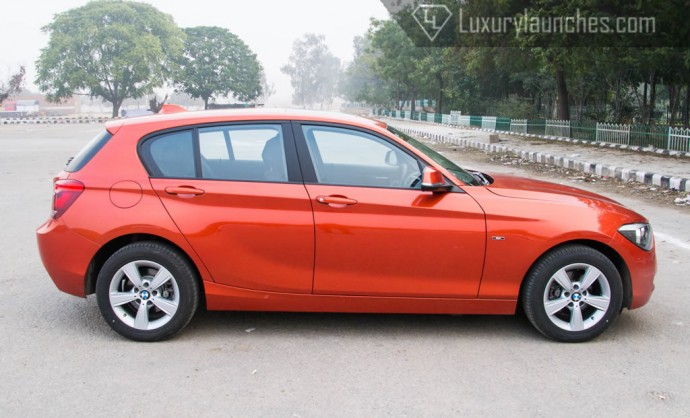 Exterior
From a styling perspective, the 1-Series has never been considered BMW’s most aesthetically pleasing work. Somehow, the whole car looks out of proportion. And to my surprise, while we had the test car with us, many confused the BMW 1-Series with the X1. Both the cars do share many similar design elements. The front end of the 118d is characterized by BMW’s trademark kidney grille and large headlights, while a wide stance and flared wheelarches make the car appear sportier and more dynamic. The top-of-the-range 118d Sports Plus a features special kidney grille with 8-slants in high-gloss finish, which definitely looks better than the standard one. The wide front and rear tracks give the 1-Series a more masculine profile, which along with the pronounced bonnet and deeper front apron certainly add more road presence. However, the long bonnet and the abruptly cut hatch make it look rather unbalanced.

In the front, the sports leather seats are some of the best in the business and provide the optimum driving position. They are superbly bolstered and hold the driver and the front passenger firmly in place, even when you decide to get greedy with the accelerator pedal 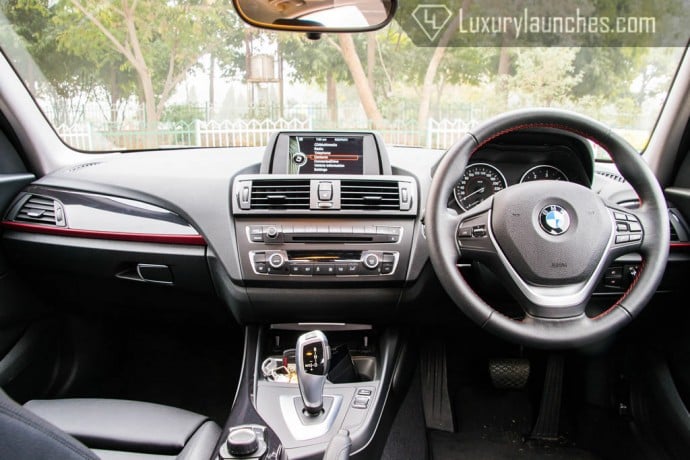 Interior
As mentioned before, it’s a completely different story once you step inside the car. There are enough metallic accents and piano black trim to make the cabin look classy and premium. In the front, the electronically adjustable sports leather seats with memory function are some of the best in the business and provide the optimum driving position. They are superbly bolstered and hold the driver and the front passenger firmly in place, even when you decide to get greedy with the accelerator pedal. In terms of equipment, the 1-Series offers a 6.5-inch display linked to iDrive, Bluetooth connectivity and music streaming with additional USB interface, Automatic climate control with microfilter, and park distance control. The lack of satellite navigation in the 1-Series is a big disappointment though. The rear seats are comparatively spacious and comfortable. However, because of the transmission tunnel running through the middle of the car, the rear can only fit two people comfortably. The standard safety package comprises front airbags for driver and passenger, side airbags built into the seatbacks, front and rear head airbags, three-point automatic belts in all seats, and front seatbelt tension limiters and pre-tensioners. The BMW 1-Series comes with run flat tires, which means there’s no spare wheel in the boot giving it ample storage space. Fold the 40/20/40 split rear seats flat and the 118d’s 360-litre cargo capacity grows to a sizeable 1200-litres stowage area. In addition to the missing satellite navigation, the other minor niggle we think the 1-Series suffers from is its unsatisfactory fit and finish. Not that its bad, but it still doesn’t feel quite as premium as we have come to expect from BMW. Once behind the wheel though, it’s very easy to forget all the minor shortfalls and enjoy the sublime driving dynamics of the 118d.

The 118d feels a lot punchier and energetic than its 0-100km/h time of 8.9 seconds might otherwise suggest 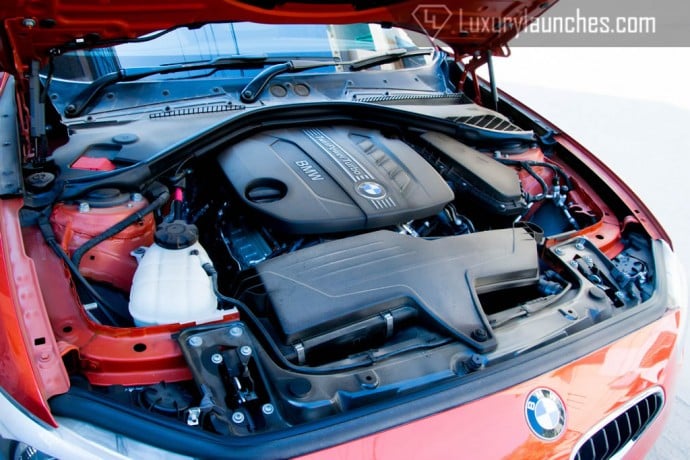 Performance
This brings us to the performance department of the BMW 1-Series where the compact luxury hatchback absolutely shines. The 118d uses a 2-litre, four-cylinder, longitudinally mounted diesel engine, which churns out a max power and peak torque figure of 143PS and 320Nm. Now the sub-150PS power output might not be enough to make the 118d a proper hothatch but dynamically, the 118d leaves no room for complaint. The 118d feels a lot punchier and energetic than its 0-100km/h time of 8.9 seconds might otherwise suggest. There is minimal turbo lag and enough power to make it behave more like a hot-hatch than an efficient compact car. However, BMW has not compromised with the fuel efficiency and emissions. With CO2 emissions of 118g/km and superb fuel efficiency, you will not have to feel too guilty about driving enthusiastically. The engine is mated to a rapid-shifting ZF 8-speed automatic transmission, which is the only option available. The auto-transmission does its job brilliantly and in fact covers up all the shortfalls of the engine. There are so many gear ratios on offer that the transmission doesn’t need to continuously ‘hunt’ for the correct gear making the driving experience seamless. There are four driving modes on offer – Eco Pro, Comfort, Sport and Sport+. The Eco Pro, as the name suggests, puts the car into economy mode and the functions like auto Start/Stop become active. The gearshifts become awfully slow and the car becomes sluggish. The comfort mode is also very similar to the Eco Pro mode and will be sparingly used unless you’re cruising on the highway at constant speeds. The Sport+ mode, which automatically switches off the ESP, is the option where the BMW 118d comes into its own. The gearshifts quicken to the extent where it will fool you to believe that it’s a dual clutch transmission. The steering feels heavier than in the other modes but continues to remain as precise and responsive which makes it that much more fun to push around corners. With the BMW 118d, you’ll rarely find yourself in any mode other than the Sport+; it’s simply delightful.

With a stiff chassis and near 50:50 weight distribution, which is further helped by wide track lengths, the 1-Series handles beautifully. It’s the kind of car that one can drive sportily with utmost control 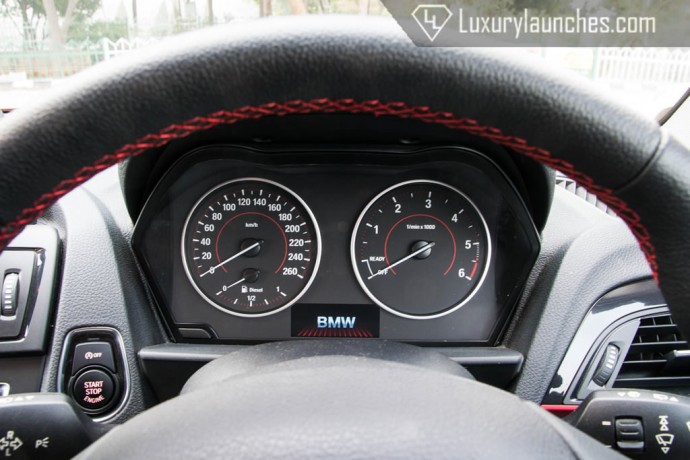 Ride and Handling
The BMW 1-Series is the only vehicle in its class offering a rear-wheel-drive driving configuration, not in India but the whole world, providing owners with driving dynamics of a small yet agile entry-level sportscar. Spending a little time behind the wheel of the BMW 118d will give you an idea how stunning the RWD system is in the 1-Series as compared to other sporty hatchbacks of its segment. However, the next generation of the 1 will move to BMW’s new UKL1 front wheel drive platform, which it will share with the Minis as well as the X1, which makes the second-generation 1-Series the last of its breed. The fat 225/45 R17 tires make their contribution in providing superior grip. They ensure that the driver feels confident while carrying high speed into corners. With a stiff chassis and near 50:50 weight distribution, which is further helped by wide track lengths, the 1-Series handles beautifully. It’s the kind of car that one can drive sportily with utmost control. In fact, it’s so much fun that you’ll begin to get greedier with the every next corner you face. The good bit is, because the stability program isn’t completely asleep, even in the Sport+ mode, one can be assured that it won’t spin out of control. However, it’s not just about superior handling but is also quite comfortable even on bumpy and rough tarmac. The suspension is well damped for the Indian conditions and easily absorbs all the undulations. That’s especially so when it comes to potholes; small or large, they are completely absorbed by the strut front and multi-link rear suspension combination. Ride quality is rather good and impressive and so are the brakes. The brakes have enough bite to give great confidence to push the car hard and offer a level of composure under load that few other cars in this class enjoy. The steering is beautifully weighted, precise and quick to respond, without being overly sensitive. While driving sportily, at no time did we feel that the car was moving about and losing traction making it perfectly stable and planted onto the tarmac. 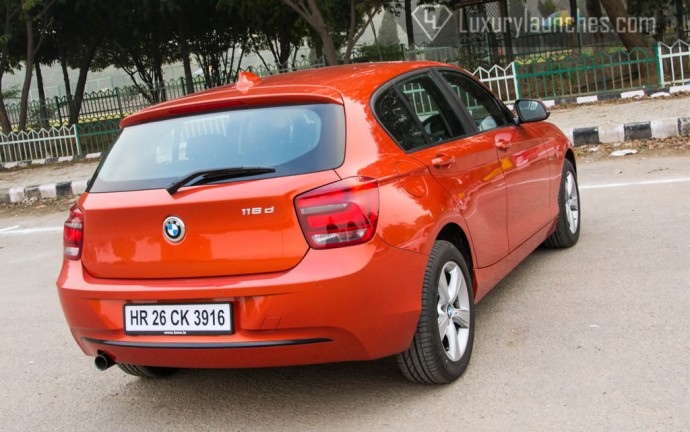 Verdict
Yes, the BMW 118d Sport Plus impressed us but the important question is should you buy it? What the BMW 1-Series lacks in terms of looks is made up for by the car’s impressive engine and the driving dynamics. The 1-Series range starts at Rs 20.90 lakh for the base petrol variant, which is not bad considering the whole package but the Sport Plus variant that we drove is slightly on the expensive side. Nevertheless, the kind of equipment level, the premium built quality and unmatched driving pleasure it has on offer along with the distinction of being the only rear-wheel drive hatchback on sale, it is well worth the price. If you aren’t one of those who like being chauffeured around in a luxury car and rather prefer to be in control, the BMW 118d is definitely for you.