The lovable MINI has been around for over half a century, enticing the youth and tickling the elderly. No matter whether you love or loathe this hatchback that was immortalized as the most maneuverable car in ‘The Italian Job’, there’s something about it that catches your eye. Take all the legacy cuteness and punch in some power and technology from (the freshly in-charge) BMW and you have a seriously mean machine out there. While it may have its place in Hollywood and the rest of the world, the idea of a hatchback that isn’t exactly the cheapest around and also not the most comfortable one around (thanks to the predecessor) could bother the discerning Indian car-buyer.

The company has now ventured into the creation of their very first 5-door hatchback that goes by the name of MINI Cooper D. While the road test makes it evident that the car is an eye-grabber, it is a truly practical investment of hopes and cash for the Indian consumer? 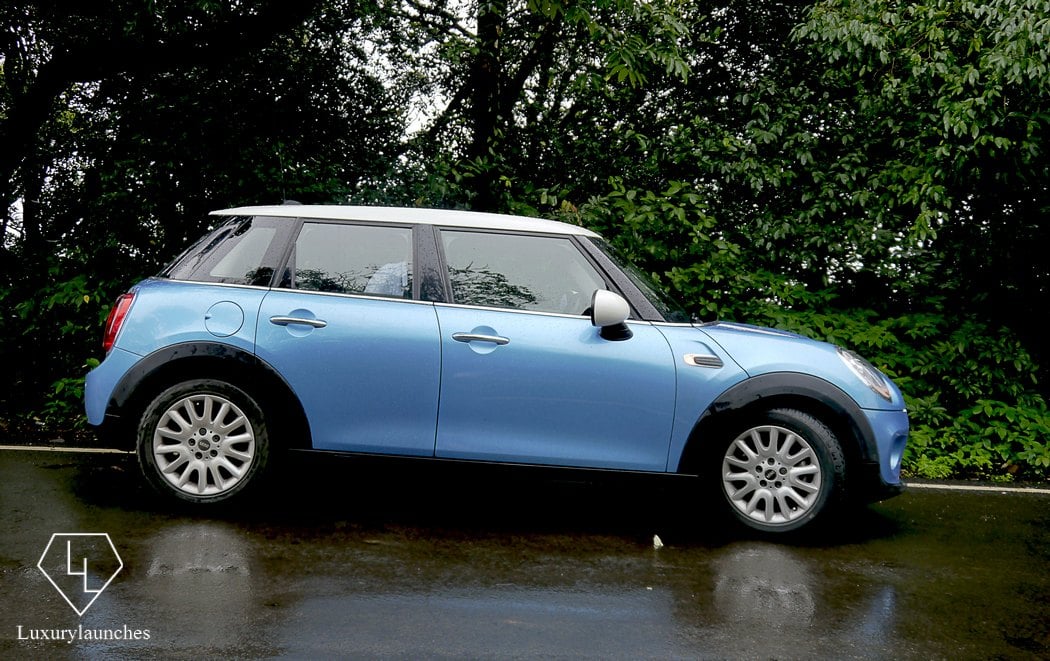 Receive more double-takes per drive
One thing’s for sure. You’re going to get the look, if you’re parked at a light, else it’s going to be the MINI that grabs all the eyeballs. The MINI Cooper D 5-door has managed to bring in a blend of modern compactness and retro designing. The mix is beautiful and overdone with the usual, elaborate façade, fine lines, hallmark bug-eyed look and fog lights embedded into the circular headlamp portion. If you decided to give this purchase a miss and ruefully stare at a Cooper D that just whizzed past you, you will notice a curved LED tail-lamp that will mock you in all its British splendor.

The car is the company’s first 5-door variant, the company has also added millimeters to the height and width of the car. You can choose from 12 very-MINI color options and a buffer of accessories that are set to amaze you. One good thing about the MINIs not really being the sales rage in India is the fact that it isn’t all that common to find one zipping around the streets. Surely, when you place this one besides any other BMW car that retails in India, the MINI will win a squint if not a drool-accompanied stare. 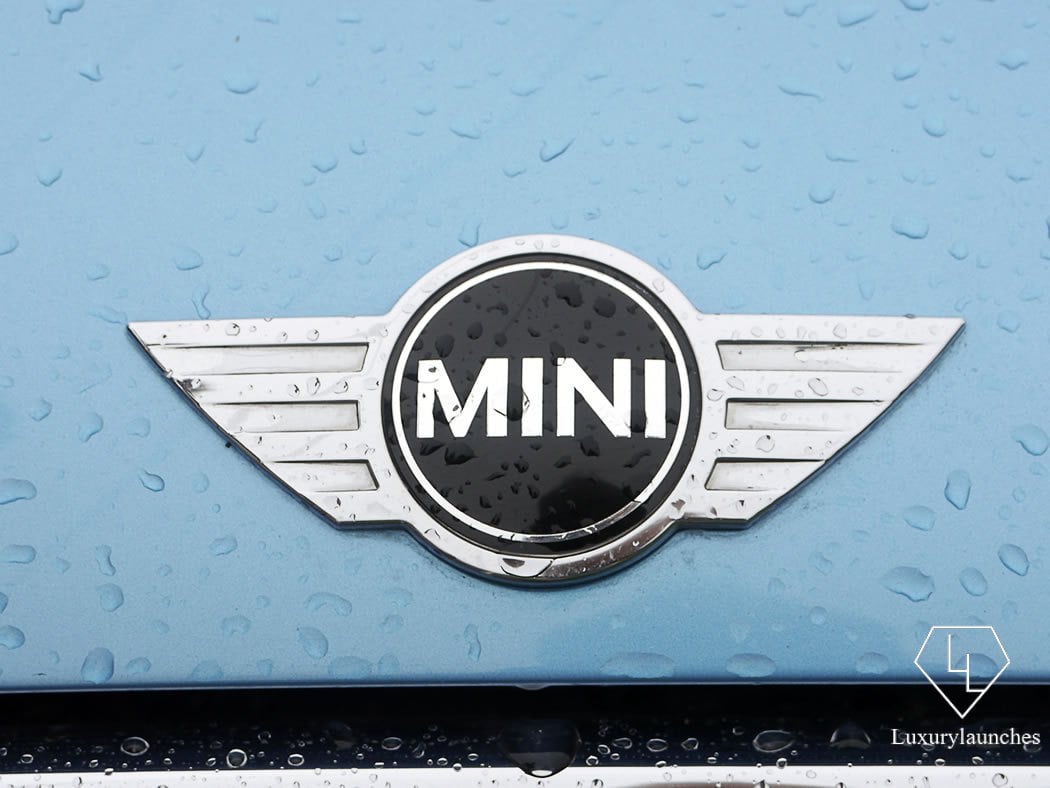 Brilliant, both, over and under the hood
On the inside, the MINI Cooper D 5-door has a circular cabin with elegant black and brown inserts. The ambient lighting within the car is delightful, while the 8.8-inch display that is nestled in the center. A number of features can be accessed through this terminal including navigation, access to the infotainment system, Bluetooth connectivity, MINI’s social media connect and more. All of this is connected by BMW’s iDrive feature. This panel too is lit up when the car is revved up or the blower speeds are increased. ‘Full power’, literally! It also offers more space than the 3-door counterpart, which needed entrants to crawl in and in certain cases, maintain a fetal position. The rear seats can be folded in a 60:40 split to free up space. 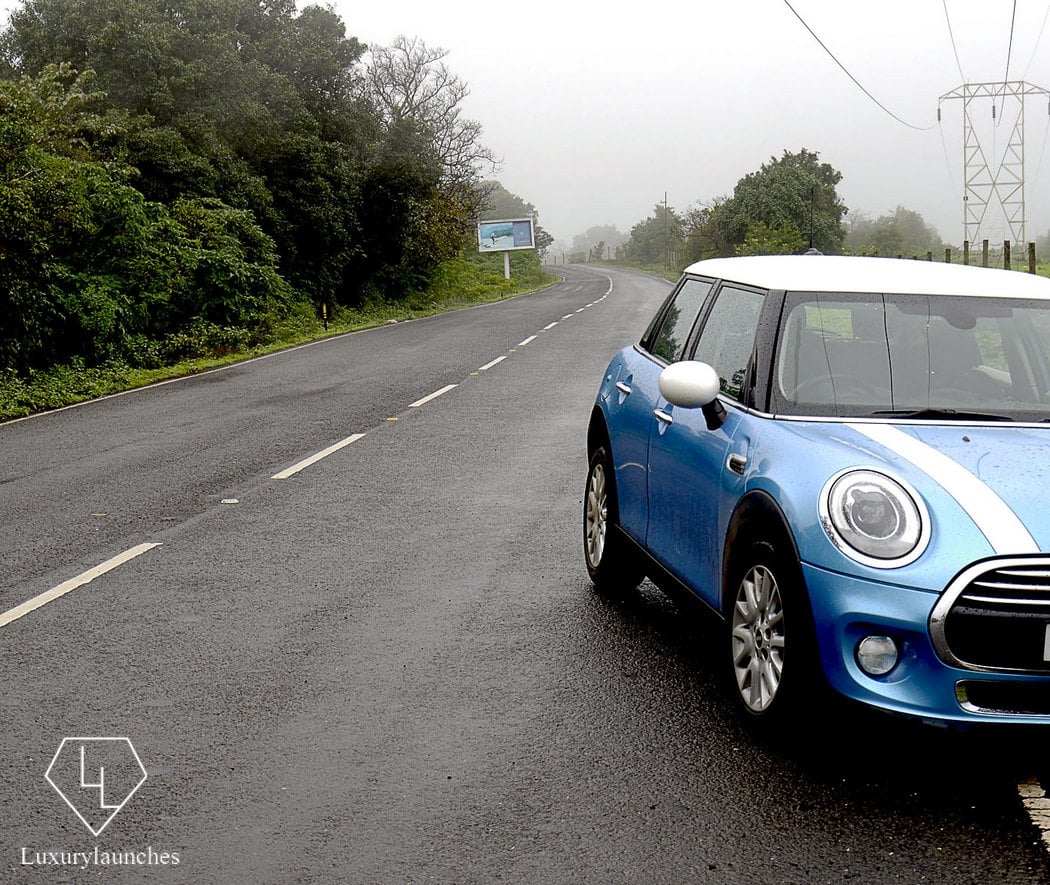 Finally a not so ‘MINI’ boot space
The lack of boot space was everyone’s qualm, while the bug-eyed car looked up and reminded you it was only a hatchback. However, the drama comes to an end with a generous 278-litre boot space offered by the MINI Cooper D. Thanks to the absence of a spare wheel, you can now store up to two medium-sized bags in the boot. Not very Indian-conducive, but hey, hatchback, remember? 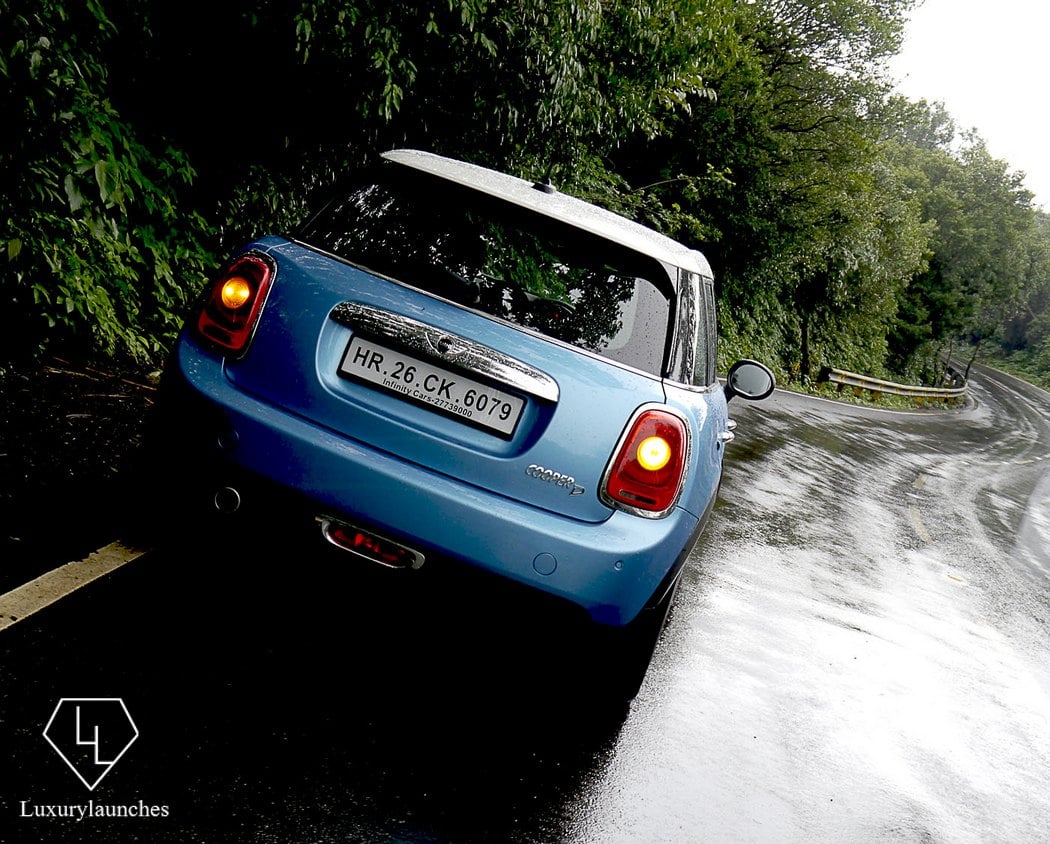 Three cylinders that could seem just enough
This one’s the first car to be built on BMW’s Uk11 platform, which makes it a rather significant player not only for MINI but the entire German group. The 1.5-litre 3-cylinder turbo diesel engine may sport a 114 horsepower spec but the missing cylinder is obviously missed on vast expressways. At 4000 rpm and a torque of 270 Nm at 1750 rpm, the car’s engine does have a grumpy ring to it but then it soon becomes synonymous to your cruises. Thanks to a number of driving modes such as the Sport, Mid and Greed mode, the driving experience is truly enriched. 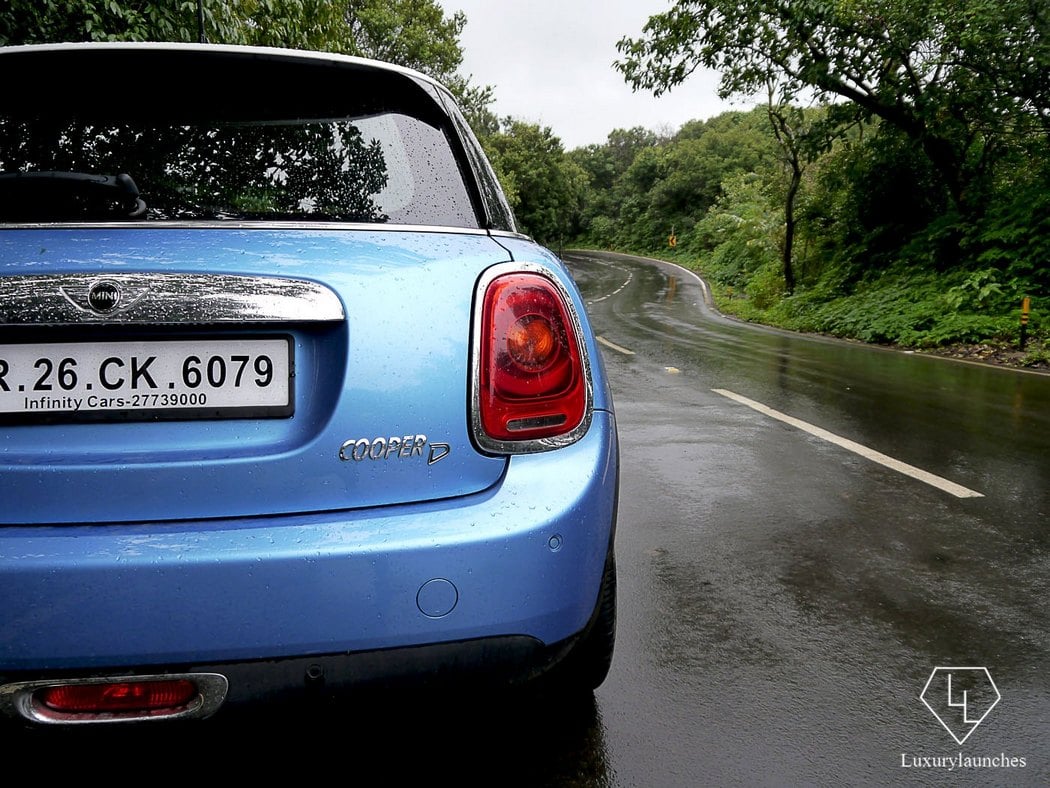 Performance wise, the car may not be supercharged but when you manage a climb from dead speed to 100 kmph in just over 9 seconds, you know that you’ve got a powerful one in your hands. Word has it that this MINI can reach top speeds of 202 kmph. No, we didn’t get that gig on on our first flight with this little monster. So pull up your socks and fasten your seat belts and let the six-speed automatic transition take you on a wild ride. 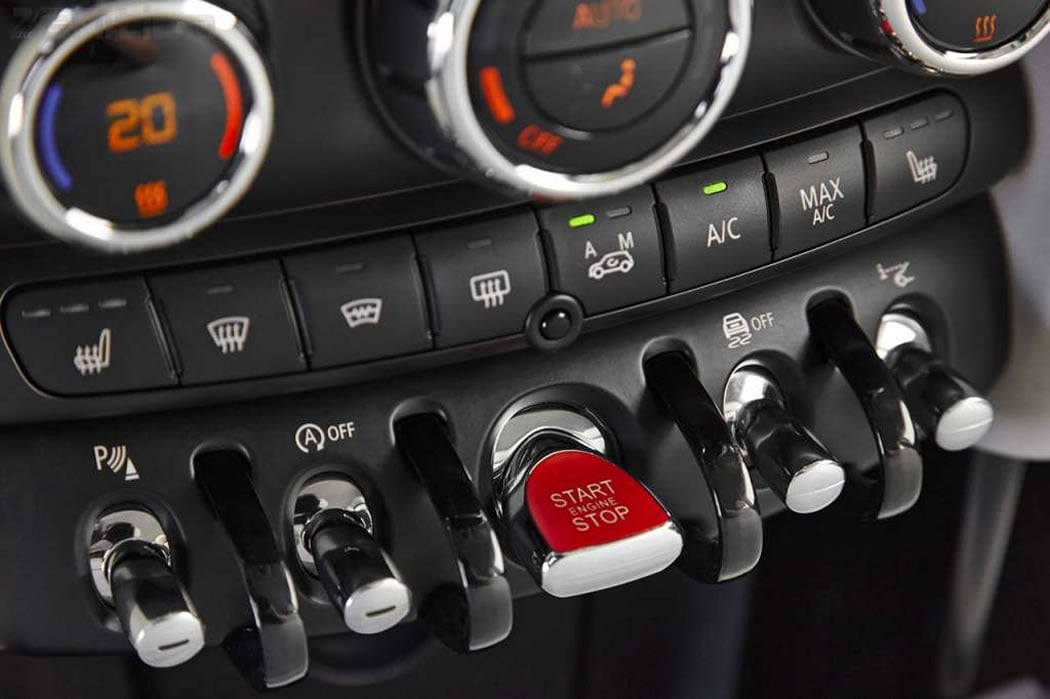 Know what being salad feels like
If you’re running down the highway at the aforementioned top speeds then you could well be warned that the car isn’t the most formidable challenger for potholes. In fact, you could well have your internal organs all jumbled up should a pothole greet you. And heaven forbid a puncture because there’s no spare tire, remember? 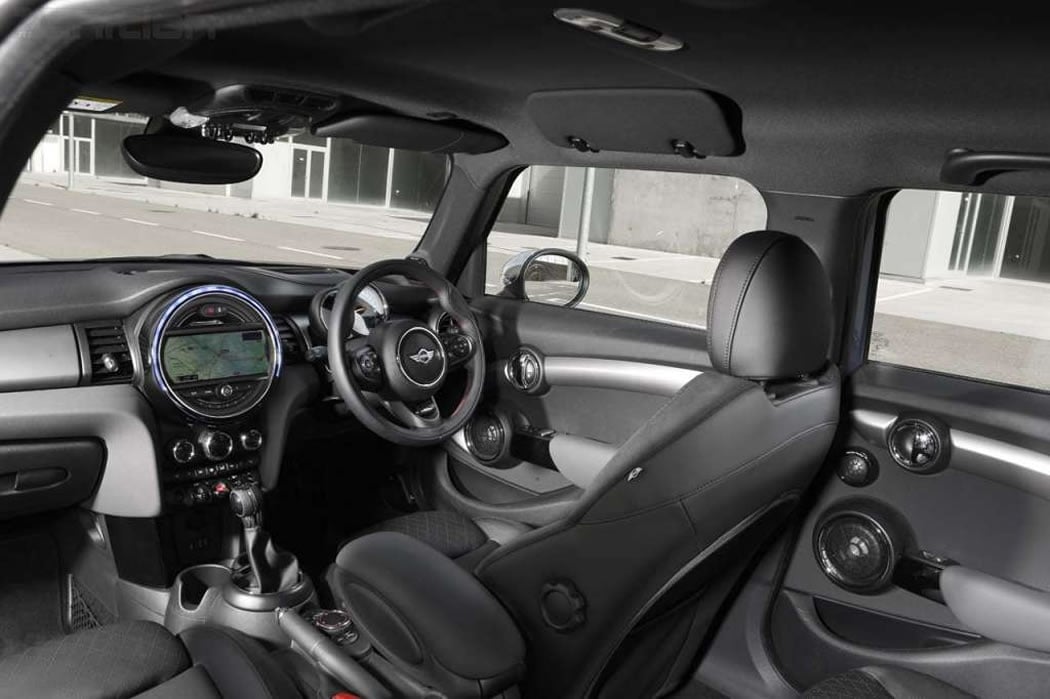 Big on many aspects
Traditional hatchbacks may be stingy on space. But the MINI Cooper D is over 4 meters in length and sports a wheelbase that is 72 mm over the predecessor’s. There’s another reason for everyone to take notice of your vain demeanor as you attempt to illegally pull off a ‘The Italian Job’ move. 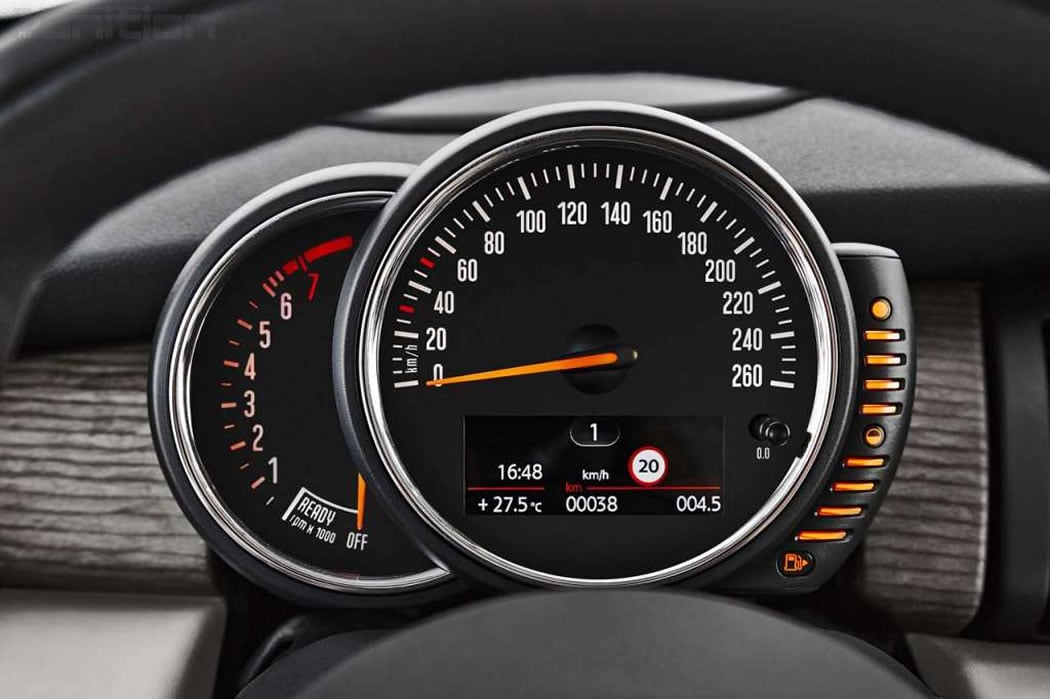 Surprisingly fuel efficient
This may surprise you but the MINI Cooper D scores rather well on the energy efficiency scale. This could be a surprising factor for many. The standard fuel consumption specification reads as 21.15 kilometers per liter of Diesel.

So, if you’re looking to make that mark with a budget that’s inflatable and a parking problem that compresses your dreams to a hatchback, then the MINI Cooper D is a great option. It will, sooner or later, be an Indian classic car we hope, but by then you will have taken every penny’s worth of this little buggy.