The Dark Knight trilogy ended with a bang, but it doesn’t seem like the caped crusader is done yet. And looks like someone just loved the franchise a bit too much as Elite Home Theater Seating has been commissioned to do up a $2 million dollar “Dark Knight” themed custom home theater for a private residence in Greenwich, Connecticut. Spanning in a massive 12,000 square foot area, the study transforms itself to remind you of the Wayne Manor. Done up with a imposing Grandfather clock, and William Shakespeare stacked bookshelves, the clock swings to uncover a set of elevator doors. You need to scan your fingerprint for access inside the elevator, which sports a glowing Bat symbol at the base of the button panel. On entering the batcave home theater, you’ll notice six backlit life-size Batsuit. With a total of six Batsuits placed throughout the cavernous lair, the custom home theater almost resembles a secret underground, medieval armoury. Flanked by two batsuits is the 180″ film screen.

Apart from all this, a secret hook rests on the bookshelf, pull it to check out the 15 feet long and 19 feet wide size replica of the Batmobile Tumbler. At the far end of the theater is a large gas fireplace with “Batcomputer” stations on either side, reminding you of all the bad guys Batman had to fightfor glory. 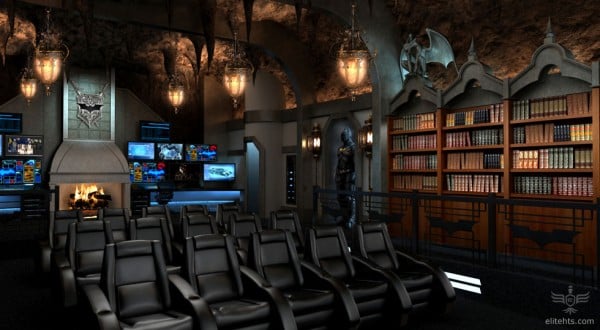