When Tony Stark dons his Iron Man suit, the crowd bursts into cheers. The comic book superhero has fans across the globe who can’t seem to have enough of him. While most of us Iron Man lovers stock up on merchandise related to our favorite superhero, one fan has done the unthinkable! Anthony Le, a diehard fan of Iron Man, has actually built an Iron Man suit! He began making the suit when he heard that his favorite comic book hero was all set to hit the silver screens in 2008. His first version of the suit was more like a costume, but by the time the sequel of the Iron Man series hit the theaters, Anthony Le had built an armor much like the one flaunted by Iron Man’s buddy Jim Rhodes in Iron Man 2. It took him more than one month and over $4000 to build this armor.

Complete with a dent-proof exterior, motorized faceplate, and spinning mock Gatling gun, this War Machine suit is awesome. Le constructed his War Machine armor by studying concept sketches posted on the internet. He has used thin, high-impact urethane for the armor, cutting it into plates and joining them with some 1,500 rivets and washers. He sculpted a clay helmet mold and then used a liquid resin mix to achieve the final look.
To make it more authentic, he added a small servo motor that opens the faceplate. The gun he made from pipes and a motor. The finishing touches to the suit were given by integrating LEDs in the eyes and chest-plate. Le has also built a new-and-improved replica of the suit that Iron Man himself wears in the film, the Mark VI. That version, however, has no canon. 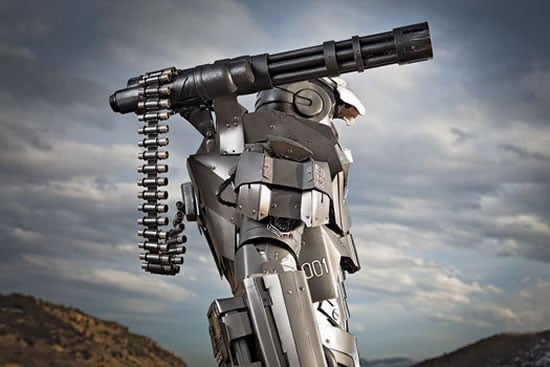 Tags from the story
Comics, Suit