Everyone in Dubai is talking about Legoland. When it opens at the end of this month, on the 31st, people can see the world’s tallest Lego building structure – the Lego Burj Khalifa in Miniland.

Dubai’s junior sweetheart and Prince Hamdan’s best friend, Mohammed bin Ahmed Jaber Al Harbi, unveiled the tallest structure which is 17 meters tall. The little-but-already-the-arab-world’s-most-famous-5-year-old added a tiny replica of himself to the model to launch the structure. He also turned on the first of the building’s LED lights. Master Al Harbi became world-famous when a video of him removing his top hat and shaking Queen Elizabeth II’s hand at the Epsom Derby went viral. This little boy lives a life as glamorous and adventurous as his (his father’s to start with) best friend Dubai’s Crown Prince Hamdan bin Mohammed al Maktoum. 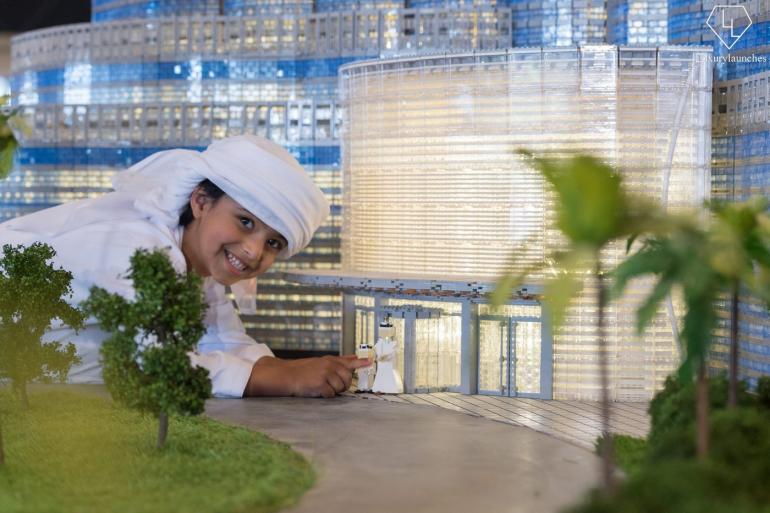 He is also already quite a charmer. He is confident in front of the cameras and strides like a true celebrity.
Legoland Dubai, which is considered to be the region’s largest integrated theme park destination, will also have a creative LED light show and a recreation of the famous dancing fountain that is iconic to Burj Khalifa.
The Burj model is no modest feat either. It was designed and built-in over 5,000 hours using 439,000 Lego bricks and weighs a ton.

The park is designed for families with children aged 2-12 and will feature over 40 interactive rides, shows, and attractions as well as 15,000 Lego model structures made from over 60 million Lego bricks. There will be six-themed lands – Lego City, Adventure, Kingdoms, Imagination, Factory, and Miniland as well.

So it is not just another attraction, this will be one worth a trip. And my nephew arrives just in time too we are going to have so much fun! More than him though, I am really thrilled! While the excitement is still a hot topic, one concerning factor of Legoland is how crazy expensive the tickets are priced. AED 250 for a person is not cheap. And with additional passes for a day at the waterpark within the same attraction, the price is AED 350. This means, like the famed brunches and the famed fun activities around Dubai and the famed beauty treatments and the famed night attractions, even this is going to be reserved for a clientele that has comfortable salary packages. For others, well, we will just have to resort to coupon booklets and lottery tickets or try and make friends who have friends at high places.

Tags from the story
Burj-Khalifa, Lego