Ever since Britain’s polling made for its way out of the EU, all gates to hell flung open. But, also, the heavens. Hell for Cartier, because they sell their most expensive watch Cle de Cartier Flying Tourbillon for $15,000 less in Britain than their more profitable market France. Heaven for shoppers who can now enjoy a hefty discount on the brand. Market researchers say that Brexit has made a grand entryway for foreign investors, especially in the luxury goods and real estate sectors. 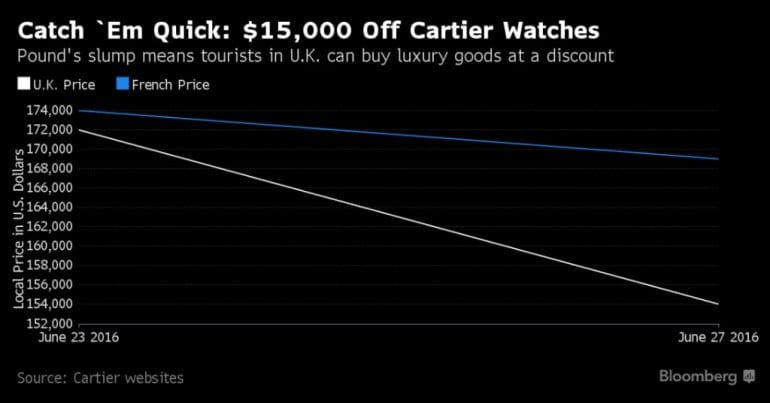 The Chinese are the keenest. Apparently, according to VisitBritain, “Chinese web searches for UK holidays have skyrocketed.” They are big on luxury off late, and so are the first ones to be approached for a red carpet welcome to the UK. European brands now need to find alternatives to drive their business, though. In the same league and standard, they have been following. Also, more foreign investors mean lesser polish and exclusivity on the brands too.

So, it is yin and yang. Good and bad. Who benefits – the world, they will be able to eat off the hands of Britain. And who loses? Businesses and some rather extremist thinkers liked to believe that their royal lineage still controlled the rest of the world.

Tags from the story
Europe, Stores