Indian weddings are potentially the most cost-effective weddings for guests. Of course, there are times when the enthusiastic bride and groom expect you to fly across the seven seas to make it to their nuptials, but it’s very different from western weddings. The main differentiating factor is in most Indian weddings, the hosts cover all costs once you arrive at the destination. In western weddings, the culture and norms usually dictate that guests should pay for their stay and other expenses as well, which amounts to a large figure. 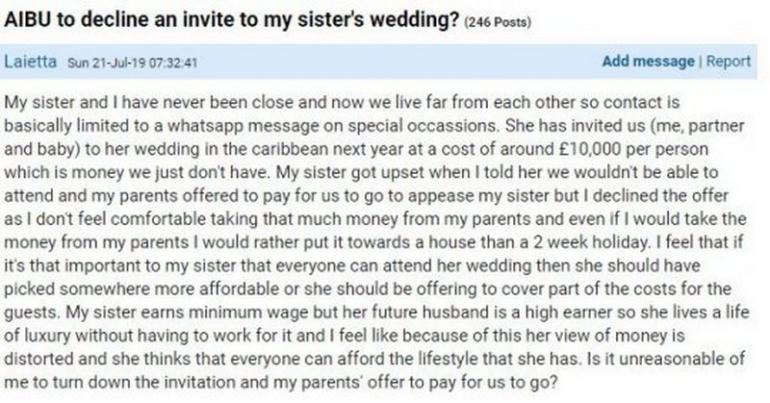 Take for example, a recent incident where a woman is refusing to attend her sister’s exotic wedding in the Caribbean next year because of the cost. The anonymous woman known as Laietta, had to turn down the invite due to the $12,500 cost that accompanied the invite.

She wrote: “She has invited us – me, my partner and baby – to her wedding in the Caribbean next year at a cost of around £10,000 per person which is money we don’t have. My sister got upset when I told her we wouldn’t be able to attend and my parents offered to pay for us to appease her, but I declined the offer as I don’t feel comfortable taking money from my parents.”

The woman continued: “Even If I would take that much money from my parents, I would rather put it towards a house than a two-week holiday.

Tags from the story
Caribbean, wedding