Smartphone ringtones are often times based on poplar symphonies and musical compositions, not the other way round. But Rainer Hersch, a British conductor, actor, writer and comedian, best known for comic takes on classical music, has compiled his latest musical piece using the sounds associated with an iPhone such as iconic default ringtones, default alerts and keyboard clicks. Hersch released a video on YouTube last year where he can be seen performing the comical piece on a xylophone while being supported by an orchestra playing the clarinet, horn, two violins, viola, cello and percussion. The video has gone on to gather more than 340,000 views and get featured in the U.K. Telegraph newspaper. 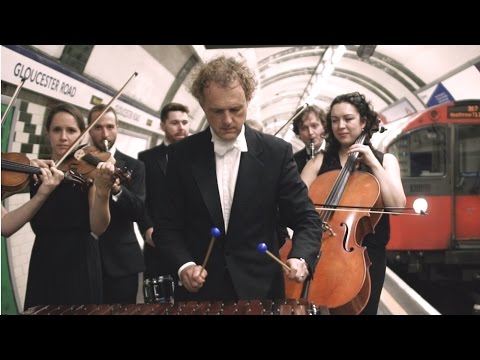 I wrote the piece last year with a friend as the sequel to my Windows Waltz, which almost 5 million people have watched so far,” he told the paper. “The reaction so far has been incredible.”

“We recorded ourselves performing it with London’s world-famous sights as a backdrop. When we got to Westminster Bridge most of the tourists on a double-decker tour bus thought they were going to get a shot of Big Ben – but they got a shot of us instead.” If you really like Hersch music better than the default ringtone, you can also download it which goes by the name “ringtone rag.”

Tags from the story
Apple, music