In an unbelievable show of generosity, a Chinese billionaire named Li Jinyuan spend something like $15 million so that 6,400 of his employees could visit France for a four day vacation to celebrate the firm’s 20th anniversary. The Tiens Group Company booked 4,760 rooms in 79 hotels between Cannes and Monaco, and 146 tour buses to hold the large group that comprises half the total employees of the company. 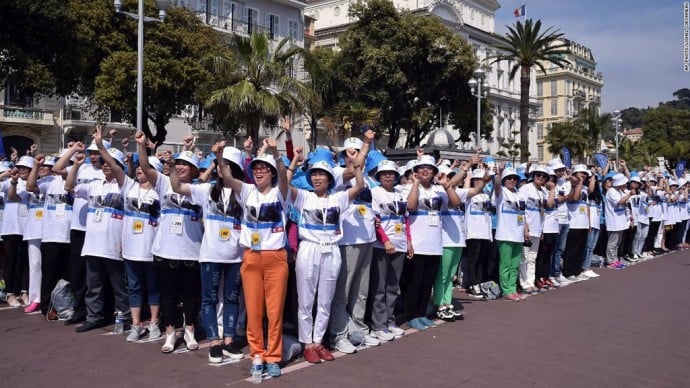 The employees of Tiens became the largest ever tour group to visit France and were given a private tour of the Louvre museum as well as opportunities to see the Moulin Rouge Cabaret and the Eiffel Tower. They were also granted a private shopping session at luxury department store Galeries Lafayette.

After two days in Paris, the enormous group headed south to visit Nice. While normal tourists might aspire to return with a tan, these ambitious people made their trip a little more memorable by standing along the Promenade des Anglais to spell out the words “Tiens’ dream is Nice in the Cote d’Azur” to break the Guinness World Record for forming the largest human sentence.

With Li listed as a billionaire on the Forbes rich list in 2011, his wealth is hardly shocking, but his regard for his workforce is pleasantly surprising. Tiens was founded in 1995 1995 and has diverse interests including biotechnology, health management, ecommerce, hotel and tourism.