While smoking inside of a spacecraft could mean a catastrophe of sorts, here’s an offering that is special for cigar connoisseurs especially in awe of the coveted Apollo 11. Designed by the Parisian design firm of S.T. Dupont, in collaboration with bronze casting designers 2Saints and master gem artisan Luis Alberto Quispe Aparicio, is a pair of remarkably detailed cigar lighters, now up for grabs. 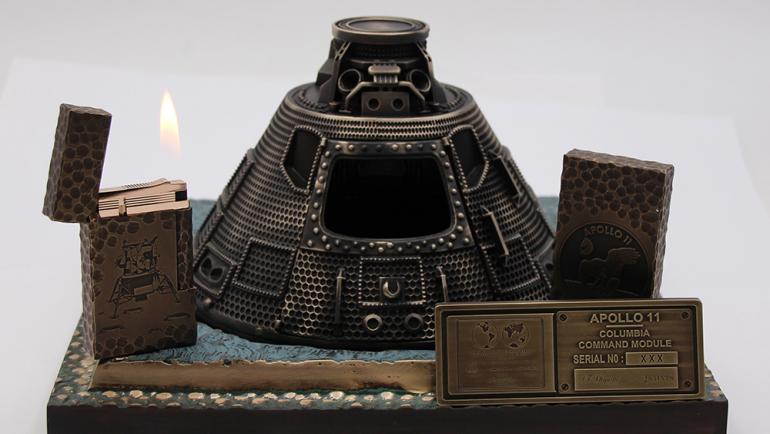 Forming part of the exclusive Apollo Collection, the latest offering draws inspiration from the command module (the only part of the Apollo spacecraft that returned to Earth) and the Lem (the lunar module, aptly known as the LM) of the Apollo 11. The complex parts have been methodically replicated in miniature as eleven individually numbered limited editions, each of which features precious metals and jewels. The limited-edition commemorative fitted with the S.T. Dupont L2 lighter has taken close to 500 hours to make and is touted as one of the most coveted pieces of its kind so far.

The command module miniature ( priced at $ 38,000 )consists of an individually numbered Apollo Prestige Line 2 double-flame lighter, finished in pink gold and encased in hand patinated bronze, while the more intricate Lem ( priced at $39,400) comes with an L2 double-flame lighter with front and back sculpted views of a solid silver astronaut surrounded by lapis lazuli, diamond, and rock crystal “planets.” The lighters can also be purchased individually (without the modules) for a price ranging between $5500- $9445 each.

Tags from the story
Lighter