Christmas Trees with awe-inspiring designs have become commonplace, especially at the Rockefeller Center in Manhattan. However, beating all previous holiday centerpieces by a large margin is this year’s Swarovski studded star that sits atop a giant Christmas tree at the complex. Created by noted designer Daniel Libeskind, the crystal-emblazoned wonder is jaw-droppingly gorgeous and a beauty worth witnessing! 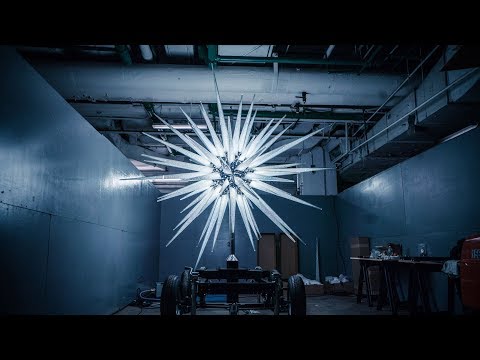 Weighing about 900 pounds, the novel star is nine feet, four inches in diameter and comes with 3 million double-cone crystals placed on 70 spikes that emerge from its center. Each protruding edge is created using six-millimeter ESG glass with crystals affixed to the inside face and features LED lighting components developed in-house by Swarovski. The center of the creation is manufactured using 70 custom-machined aluminum components, plus 140 LED lighting spots. The star took two years to complete and was painstakingly assembled at the very site on Rockefeller center.

Commenting on his creation, Libeskind said, “It’s a sculpture, a three-dimensional panoramic star that is exploding into dynamic light,” He further added, “The technology, the form, the complexity, the crystals in the millions—it was really a challenge and a beautiful adventure.” While already assembled on-site, the star can be witnessed in its full glory as it emits 106,400 lumens of white light when the decorated tree ( a 72-foot-tall, 12-ton Norway spruce) is officially displayed on Nov. 28.

Tags from the story
Christmas, Swarovski