The world is full of legends and stories of magical, other/outer worldly weapons that have mystical powers or some strange lore about how they came to be. Through creative writing and perhaps misinterpretations of some histories, these legendary weapons have made their way, in some form or another, into our current genre of movies, stories, lore, comics or sci-fi adaptations. And while stories of Excalibur, lightsabers from distant galaxies, Thor’s mighty hammer Mjölnir, and even the meteorite sword from the animated television series “Avatar: The Last Airbender” are all part of today’s fantasy stories, there are a couple of real-life weapons that have true-to-life stories that could qualify to be in these categories of legendary weapons.

The Sword of Heaven, and in case you’re wondering, that’s its real name translated from Japanese, is a “katana” that was crafted by a Japanese master swordsmith, Yoshindo Yoshiwara. The Japanese name for this immaculately constructed weapon is Tentetsutou. All of this only further enhances the beautiful sword’s legend, but there’s one specific detail that makes it truly ‘out-of-this-world’; Tentetsutou’s blade has been forged from iron extracted from an actual meteorite fragment that came from the Gibeon iron meteorite that crashed in Namibia in prehistoric times, formed around 4 billion years ago. 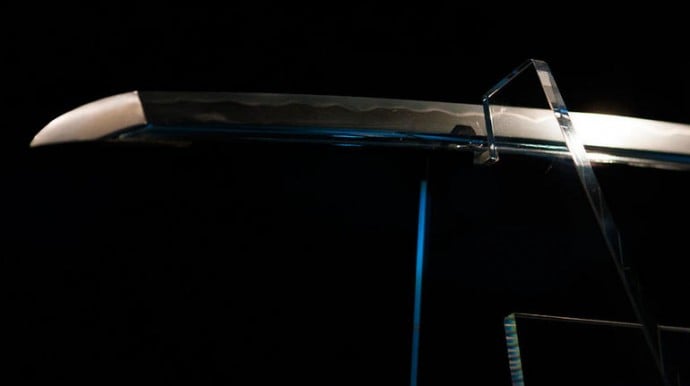 That’s pretty much as cools it can get – Forged from “alien” materials – check, crafted by famous Japanese swordsmith – check, looks as fantastic as it sounds – check, has a fascinating and very catchy name – check… have we missed anything?

The Chiba Institute of Technology at the Tokyo Skytree tower is now the home of the Sword of Heaven where it is on permanent public display right alongside the material that went into its construction i.e. a piece of the famous Gibeon meteorite. This is no run-of-the-mill katana and is highly priced, seeing as the material is so very hard to come by. The Chiba Institute very appropriately addresses the weapon by saying that “the Sword of Heaven truly symbolizes the relationship between human technology and space,”.