More and more people are leaving their fortunes for the well being of their pets. But a recent such act has left the son of the generous pet lover fuming. Wealthy heiress, Gail Posner who died aged 67, made arrangements to give her Chihuahua and two other dogs a £2 million ($2.9 million) trust fund and a £6 million ($8.8 million) beach-front mansion in Miami. What is more, her staff, including bodyguards and housekeepers, has been awarded £17 million ($25.2 million) and the right to live rent-free in the property while they cared for the animals. At the same time, her only son was left a measly £650,000 ($964,700). Not happy with this unfair will, her son Bret Carr has launched a legal bid to have her last wishes annulled. He says his mother was drugged with painkillers and ‘brainwashed’ into spending lavish sums on her pets, including Conchita, a Chihuahua who was regularly treated to spas showered with diamonds. He further claims his mother was ‘deeply disturbed’ and was persuaded to hire a publicist to promote Conchita as ‘one of the world’s most spoiled dogs.’

When alive, Miss Posner was famously known for spoiling her dogs. Her beloved Conchita’s most prized possession was a £10,000 ($14,840) Cartier necklace. But, did Miss Posners love for her dogs surpass the love for her son, is a mystery that will remain unsolved. 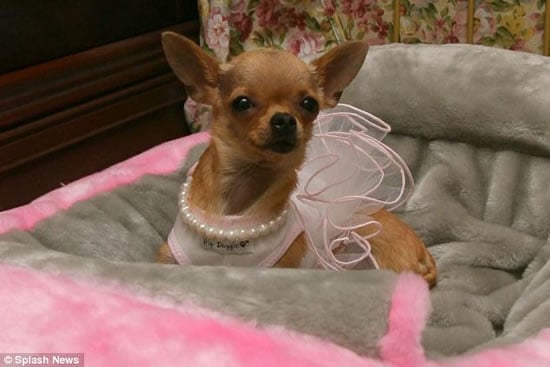 Tags from the story
Dogs, UK