Giving a whole new meaning to the term “hunting for treasure” are the organizers of the Folkestone Triennial who earlier this week disclosed details of a hush-hush art project by Michael Sailstorfer. The German artist has buried gold bars worth £10,000 (that’s around $16,600) in the sands of the Outer Harbour beach and adventure seekers are invited to try their luck at finding the treasure. The best part? It’s a finders keepers deal and anyone who hunts down a bar is not so much as expected to notify the organizers! The Gold bars are all of different sizes so their value differs, each one is marked ‘Made in London’.

The artwork is titled “Folkestone Digs” and has been commissioned by Situations, Bristol based arts producers with an aim to change the perception of art. Claire Doherty, the director of Situations was quoted saying, “So often public art funding is spent on a static sculpture or a bauble on a roundabout and part of what we do is to say, actually sometimes a temporary project can have as much impact in the collective memory as something that has been there a long time.” 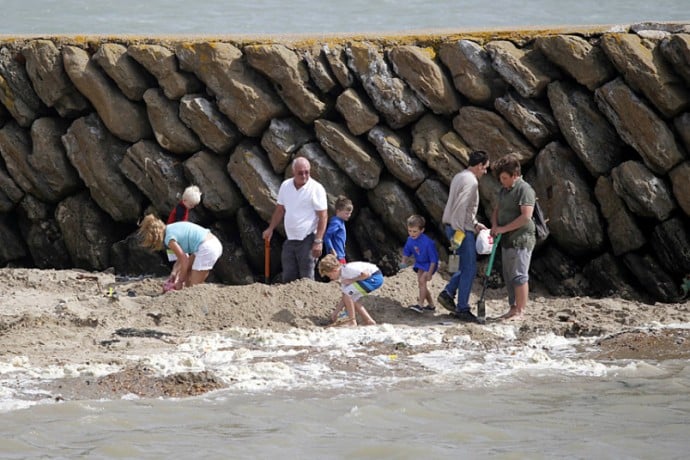 The interesting part is due to secrecy among treasure seekers, and planted metal washers (to mess with the metal detectors that people are likely to use) the organizers expect that it is entirely possible that they will never know if all the buried bars will be discovered. So years later, picnickers at Outer Harbour may actually find buried treasure and become part of an art piece without even realizing it!

Does it sound too good to be true? We’ve got to admit, we’re kind of skeptical too. What is the real art is a bunch of people on a wild goose chase? There might not be any gold buried there for all we know! What if the ploy is to increase the selling price of gold by calling it art? We have so many conspiracy theories about this. If you want to be part of the action visit Folkestone’s Outer Harbour beach at low tide and try your hand at treasure seeking! You might just strike gold.