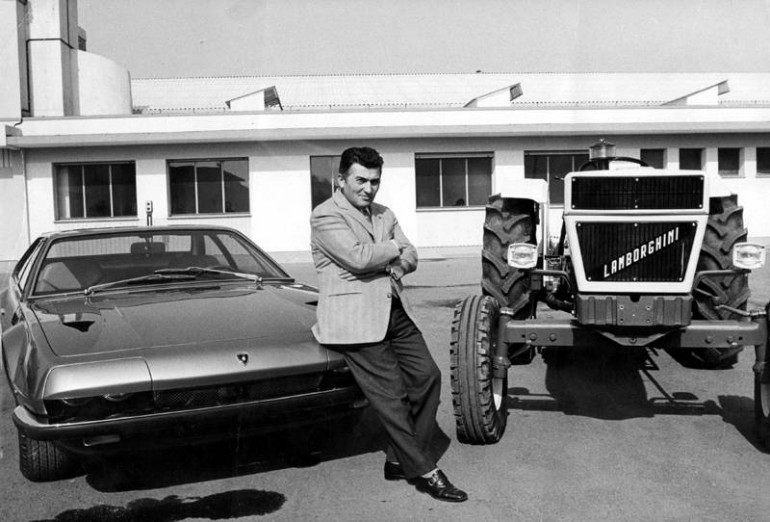 1. The birth of Lamborghini
It may be hard to believe, but this luxury sportscar company had some truly humble beginnings. Long before Lamborghini was anything more than an Italian farmer’s last name, Ferrari was already building fast and glamorous racecars. Ferrucio Lamborghini was born to a family grape farmers and later pursued his interest in cars to a job with the Air Force mechanics corps where he learned plenty about automobile engines. Once the war was over he set up a motorcycle and car repair business in Northern Italy. Soon, he started buying surplus military machinery and converting them into tractors. Agricultural supplies were in demand and Lamborghini’s business took off allowing his to expand it considerably. Now a wealthy man, Lamborghini owned several sportscars and one of them was a Ferrari 250 GT. However, Ferrucio was constantly irked by the poor clutch of this expensive car and tired of having to travel to Maranello to have it constantly replaced. He pursued his complaint to the point of meeting Enzo Ferrari – the founder of Ferrari. Here is where the story differs. Some say that Enzo never really respected any of his customers and dismissed Ferrucio’s complaint but without any particular. Others argue that it was Lamborghini’s agricultural background that offended Ferrari who couldn’t accept the idea that the tractor manufacturer knew more about cars than him. A third version of the story suggests that Ferrari simply didn’t see the problem with his car and insisted that the problem was in Ferrucio rather than in the 250 GT. In every version of the story, Lamborghini was affronted, and decided to create a superior product that addressed all the flaws that Enzo Ferrari wouldn’t acknowledge.

He started his own automobile factory and actually employed some former Ferrari designers to boot! He even saved money by incorporating some tractor parts into his Lamborghini 350GTV cars. Later in 1966 came the Miura which really put Lamborghini on the map thanks to its rear-wheel-drive layout which became the accepted layout for high-performance cars at the time.

As with every story, we can’t say how much is fact and how much is embellishment, but the Ferrucio Lamborghini’s determination is a life lesson to everyone. It’s also commendable that he was dedicated to creating a superior car even when established manufacturers of the time couldn’t be bothered. A competition with Ferrari spanning decades is just the icing on the cake for the tractor manufacturer.

Now that you’re done reading, it’s time to start thinking about how to turn your own humiliating moments into successes.