Kids do the darndest things, and parents are often at the receiving end of their antics. But what left the world gobsmacked was travel blogger parents Garrett and Jessica of popular Youtube channel, The Bucket List Family, recent adventurous activity. The couple was dubbed irresponsible after a video of their children, diving in a shark cage. The kids are only seven (daughter, Dorothy) and five (son Manilla) in age and were happy to step into the shark cage. The two children don wetsuits and breath with hooker lines, with their father swimming along as they plunge into the water and the cage. The worrisome part is, there is a huge shark and a cage with holes. “Lots of big holes,” as quoted by their mother, Jessica. The internet is never slow in noticing the details, and it surely didn’t miss anything this time. Some Youtube commenters were quick to show their disapproval. “Only takes a second, and something can go horribly wrong with holes in a cage-like that,” one commenter said. While kids are accustomed to swimming and water from a young age, deep-sea diving is an entirely different experience. One with a shark involved can be very traumatizing for kids that young and impressionable. 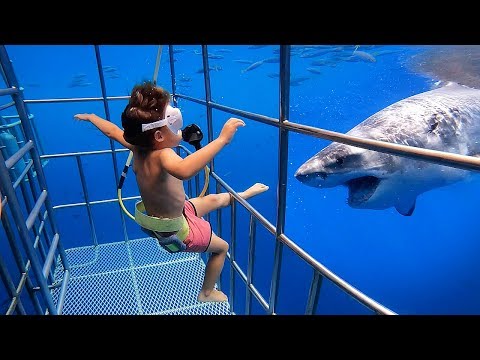 Deep-sea diving rules differ around the world, somewhere its 8 or 12 years of age, but no one has kids this young trying a stunt like that. The video was uploaded in November and has garnered as many as 4.1 million views.