Pablo Picasso works never cease to appeal to art lovers. If you are a fan of these great artists’ work, you must definitely visit the Victoria and Albert Museum. The museum has just unfurled the largest work by Picasso. It is so big that it was in storage for nearly 80 years before it was unrolled and put up for display. Stretching over more than 34ft by 38ft, this canvas was created for Russian ballet impresario Serge Diaghilev. With the help of a scaffolding tower and five riggers, the museum staff managed to hang the front cloth. A front cloth is a theatrical creation designed to hang behind the red velvet curtain and be viewed by an audience while musicians play the overture. This particular piece was designed for the Ballets Russes performance of Le Train Bleu, in Paris, in 1924. In fact, this work is just a larger version of an original painting titled Deux Femme Courant, which Picasso had gifted Diaghilev. Picasso agreed the design could be enlarged to an enormous stage canvas, and theatre artist Prince Alexandre Shervashidze created the enlarged version in just 24 hours. Impressed by the copy, Picasso added his signature and dedication. The artwork was spread out for various performances of Le Train Bleu over two seasons.

The cloth, which has long been stored rolled up, has been occasionally used for gala fundraisers. Picasso fans will however have to wait till September 25th to view this gigantic piece as it will be showcased as part of an exhibition titled Diaghilev and the Golden Age of the Ballets Russes 1909-1929. 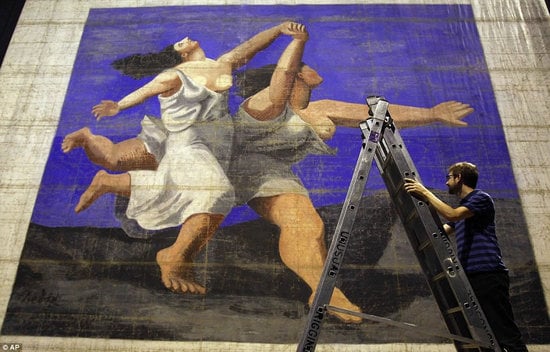 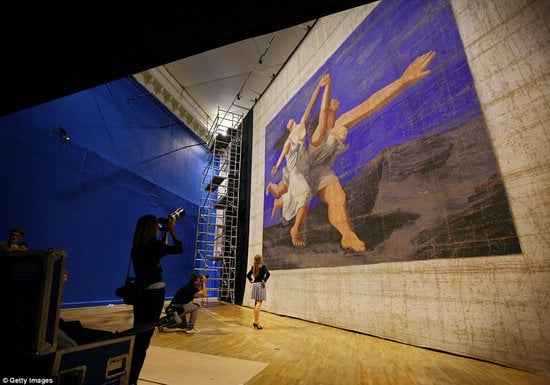 Tags from the story
Artwork, Largest