While technology is touted as one of the main reason for the environmental disruption, in this particular case, its aims at doing just the opposite. In an attempt to stabilize the dwindling ocean life, an ingenious Australian firm by the name of Reef Design Labs recently designed the world’s largest 3D printed coral reef, which has now found itself a home in the Maldivian waters. 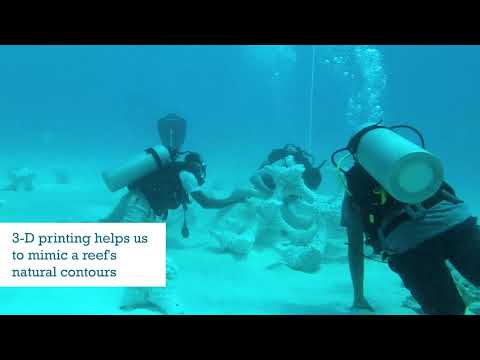 To kick-start, the experiment, experts as Reef Design Labs put together 3D molds of the reef structures and 3D printed them over a span of 24 hours. They then cast the structures in ceramic, which is similar to the calcium carbonate found in actual coral reefs, before finally shipping them to Maldives (all the way from Australia), where they were filled with concrete, assembled at Summer Island, and then dropped into the big wide ocean. As a final step, live coral was transplanted onto the artificial reef, in the hope that it will grow further on and form a new living reef within 2 or 3 years.

Commenting on the exclusive experiment, Alex Goad of Reef Design Lab said, “3D printing technology helps us to develop more innovative ways of protecting coral reefs. The technology allows us to mimic the complexity of natural reef structures, so we can design artificial reefs that closely resemble those found in nature..We hope this will be a more effective way of growing and restoring corals.” Earlier this year, Fairmont Maldives had also launched their very own Coralarium. After all, who’s to say that technological advancement is only doom for our planet!

Tags from the story
3D-Printing, Maldives