India just celebrated the birth anniversary of their most iconic freedom fighter, Mahatma Gandhi, on Oct 2nd. Globally famous for his tolerant style of protesting India’s British rule, he had also garnered attention for the Dandi march to produce salt without paying the tax. And Montblanc intends to respect this leader by presenting a limited edition luxury pen with Mahatma Gandhi’s image etched on the nib. To commemorate his birth’s 140th year, the company will also highlight the 241 miles traveled by him during the famous salt march of 1930 by making just 241 pieces of this pen. Shaped out of 18-carat white gold, his image is engraved with 18-carat yellow gold wire. This figure shows Mahatma walking with his walking stick during the march. The body and the hood are also textured to signify the Indian silk thread with a unique technique. This limited edition Montblanc pen is priced at $25,000.

Though Gandhiji himself was simple man, I am sure there are many people who would love to pen down a few words with his image on the nib. People who intend to let him lead their words! 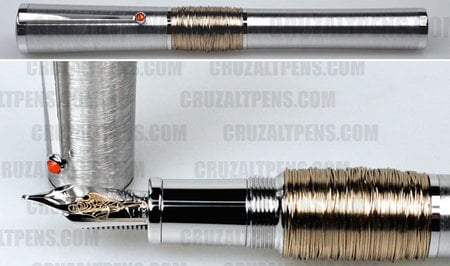