Imagine being at 377 feet above the ground and watching the world right below your feet. That’s exactly folks from Gizmodo did. They went to the Odaiba Ferris Wheel is the largest one in the world with a diameter of 100 meters and a height of 115 meters above the ground. This wheel has four glass-bottomed cars too. And these daredevils went on to ride in precisely one of them. If the base you are standing on is opaque then the point of terror is lesser. But when you are actually standing on a transparent glass that high, then it’s a matter of time before someone actually pees in his pants! Coming to the Odaiba Ferris Wheel, it’s the symbol of the Palette Town. A fantastic panorama from the slowly revolving wheel includes an entire view of Tokyo Tower and a broad view of the Tokyo Metropolitan. The whole of Tokyo Bay can also be seen, with the highlight of the rife being the magnificent Rainbow Bridge, which is regarded as the symbol and pride of Tokyo Bay. Rainbow Bridge lights in the evening and with a little imagination, appears just like a huge rainbow stretching across the bay, with the cars like shooting stars dashing through the rainbow.

The Ferris Wheel itself also lights up in the evening, and by itself is a very pretty sight. 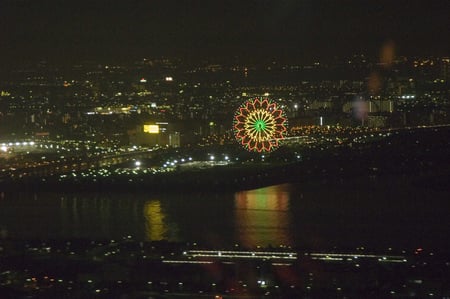