It was fine till the Star Trek saga was limited to a futuristic resort in Jordan and a Qantas A380 aircraft. But we were literally propelled out of our chairs like a rocket when we read about this ambitious engineer called BTE-Dan who wanted to build a real USS Enterprise! The genius has a remarkably detailed plan on the building of the iconic spacecraft and estimations for the costs involved. He’s introduced the Built The Enterprise website a week back, and it’s already taken off like a hot case due to traffic from fellow Trekkers and regular aerospace fans. He also stated that if the plan is implemented infallibly, the real USS Enterprise named Gen1 Enterprise could be built in as little as 20 years.

The Enterprise that will be a “spaceship, a space station and a spaceport” can accommodate up to 1000 people and be used for intra-solar system missions. It will be capable of reaching Mars in 90 days and the moon in three days. It will also travel to other planets and asteroids. 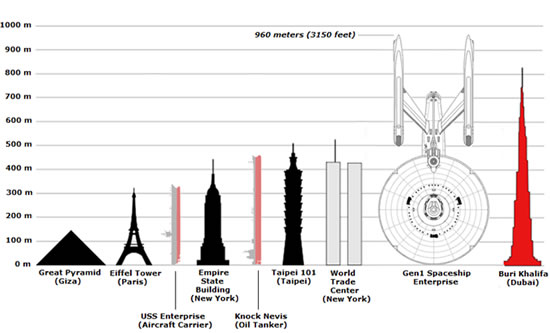 Dan states that such the Gen1 Enterprise will be completely constructed in space and cost about $1 trillion. That’s a lot of money, and I really doubt if the government would give as much as a simple glimpse to this intelligently concocted plan.
[Gizmag]

Tags from the story
Space-Tourism, Star-Trek