While the Eagles were eeking out a victory in the first round of the playoffs, the Saints were at home waiting and watching. Doesn’t this line ring some SuperBowl bells? Only a true SuperBowl fan will feel the adrenaline rush when he gets to know that an autographed, limited-edition Superbowl XL MVP Helmet is up for sale. It is autographed by 35 “legends of the game,” including Bart Starr, Terry Bradshaw, Franco Harris, Deion Branch, Tom Brady, John Elway, Terrell Davis, Steve Young, Emmitt Smith, Troy Aikman, Mark Rypien, Ottis Anderson, Joe Montana, Jerry Rice, John Riggins, Randy White, Lynn Swann, Larry Csonka, Chuck Howley, Len Dawson, and Joe Namath, among many others. A protective casing is included to keep the fidgety hands away. 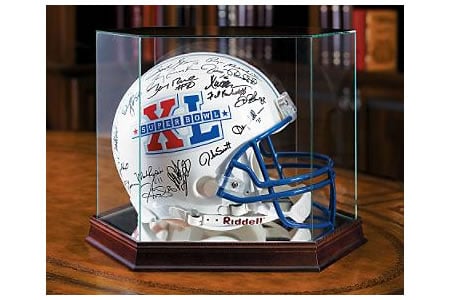 Priced at $15,000, we bet anyone who buys this art-piece will not wear it to any of the pre-Superbowl flag football games.
Source