Do you want to swim at locations you always dreamt of travelling to and amongst some of the most exotic aquatic life there is on this earth without having to leave the comfort of your pool? Introducing ‘Swimarium 3D’ by Ova Studio which is a combination of a swimming pool and an aquarium with the design allowing swimmers to experience swimming in open water from the comfort of their pool. The Swimarium 3D will take you into your dream diving spot including the Great Barrier Reef, Galapagos, Tiger Beach, Palau, Bali, French Polynesia, Maldives and many more in just one click. Okay, there is no black magic involved here which will teleport you to these amazing destinations but just plain technology which helps the system mimic the environment of these exotic locations. 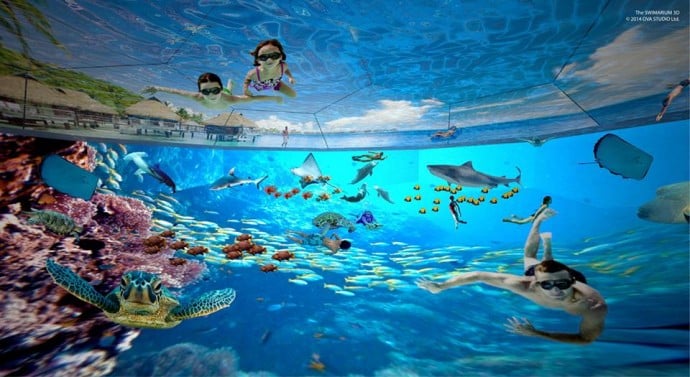 The concept behind the Swimarium 3D is very similar to the IXION Windowless Jet we covered yesterday and it has boundaries made out of glass under which LED screens broadcast live feed or recorded imagery from your favorite locations. Furthermore, with the addition of Ova Studio 3D goggles, you will truly have a sense of being immersed in the ocean as it will give you a sensation of swimming with most beautiful underwater creatures. It is still in the concept phase but Ova studio explains that it is adaptable enough to fit in most environments, from private estates to public spaces including places such as theme parks, diving schools, and even luxury estates. Though the virtual environment won’t be as realistic as the real deal and it will fell like swimming under live wallpapers but nevertheless it’s a leap towards a future which we have only seen in sci-fi flicks.

Tags from the story
Swimming-Pool