we bring you the week that was at Luxpresso

Gucci’s wild SS17 advertising campaign
Gucci unveiled its Spring Summer 2017 advertising campaign set in the streets of Rome—the brand’s home city. The campaign is an homage to artists like CY Twombly, Mario Schifano, and Laura Betti. It features a lion, leopard, and tiger. The big cats and models are captured against the backdrop of popular Roman spots like the Trevi fountain.
Gucci has been creating some dreamlike campaigns since Michele’s appointment and since then, has captured Gucci models in several surreal setups. While in the SS16 campaign, models were seen walking around Berlin holding peacocks, for fall 2016, they headed to the vibrant city of Tokyo.

Piaget’s Chinese Zodiac inspired timepieces
Piaget is celebrating the Year of the Rooster (Chinese New Year) by introducing two new versions of its popular timepieces-the Altiplano and Polo Tourbillon Relatif-made using white gold and enamelling. Both these watches are inspired by Chinese Zodiac signs.
The first model, Altiplano, boasts of a 38mm dial that has a rooster (the zodiac sign of the year) engraved and enamelled on it. The rooster is created by master enamellist Anita Porchet, who uses the Grand Feu cloisonné enamelling technique that is used in metallic arts. Apart from the enamelled rooster, the dial also features 78 brilliant cut diamonds. It is finished off with a black alligator strap with a white gold ardillon buckle.
The second timepiece is the Polo Tourbillon Relatif whose numbers are replaced by the 12 zodiac signs. The signs are engraved and enamelled using the champlevé technique that is used in decorative arts. The case back of the timepiece bears the Chinese symbol of longevity. It can be fastened with a black alligator strap that comes with a white gold clasp.
The Altiplano and Polo Tourbillon Relatif are limited edition watches available at all Piaget boutiques around the world.

Kate Winslet stars in Rolls Royce short film
The House of Rolls-Royce’s first instalment of its short film series was released recently. Rightly called the Spirit of Ecstasy, this film is based on the history of the brand’s flying mascot of the same name. Through anecdotes, the series aim to narrate the journey of Rolls-Royce from 1911 until now. Hollywood actress Kate Winslet has lent her voice to the film. The Spirit of Ecstasy is an interesting mix of motion captures, 3D scanning, animation, and live action.
The Spirit of Ecstasy and the brand’s other short films are produced to mark the arrival of the all-new Rolls-Royce Phantom set to be unveiled in 2017.

Boombox bags for the party season
The party season is all about dressing right and grooving to music; and what can be better than an accessory that combines both? We’re speaking of some chic, boombox-shaped bags to complete your look.
These not only truly exude the vibe of a boombox but also make for stylish companions. Here’s our list that features everything from Louis Vuitton’s boombox-inspired bag to the one by Dolce & Gabbana that actually plays music.

Jennifer Lawrence’s power dressing
American actress Jennifer Lawrence likes to power dress, but with her own little twist to it. While we weren’t big fans of the ill-fitting black pantsuit she wore last to a talk show, we do think she upped her fashion game with this off-shoulder Antonio Berardi tailored suit she recently donned while promoting her latest film, Passengers.
A feminine take on the classic pantsuit, the highlight of the look was its blazer. It was an off-shoulder one (a style that was touted as one of this summer’s hottest trends) with a plunging neckline. Lawrence completed her look with a pair of two-strap Giuseppe Zanotti sandals.

The cocktail ring is what dreams are made up of
To give us some serious jewellery goals for the party season, Forevermark Diamonds has unveiled this exquisite 18k white and rose gold floral cocktail ring. The 18k rose gold petals of this ring are studded with round diamonds. The total weight of the ring is 28gms and the total cartage of the diamonds on it is 6.5 carats.
This floral ring is available at Manek Gems in Mumbai, and online on forevermark.com. 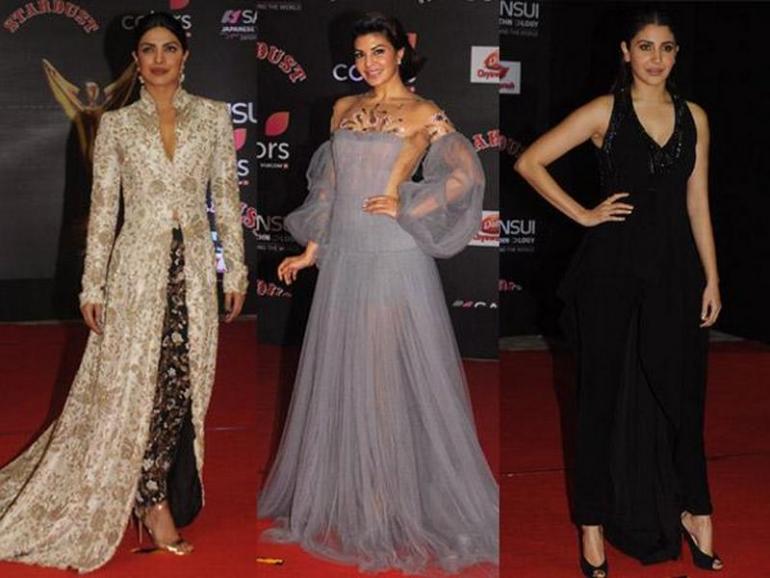 What the divas wore on the Stardust red carpet
The Bollywood ladies stepped out in their finest for the Sansui Colors Stardust Awards. From Kajol’s jaw-dropping Gauri & Nainika gown to Priyanka Chopra’s graceful Anamika Khanna ensemble, we’ve rounded up the hottest looks from the show.
Anushka Sharma donned an asymmetrical Gaurav Gupta jacket and pants while Aishwarya Rai Bachchan was dressed in a pale blue gown from Rami Kadi. Jacqueline looked stunning in a Yanina Couture gown and Kirti Sanon picked a sequined strapless Papa Don’t Preach gown with a thigh high slit. Pooja Hegde was in a Ziad Nakad gown and Saiyami Kher wore a red velvet Shantanu and Nikhil outfit.