Come Christmas, and the world lights up with decorations galore! Taking the festive decorations, a little too seriously though, is the gorgeous country land of Sri Lanka that recently unveiled a skyrocketing Christmas tree on the eve of Saturday. Standing erect at 238 feet in the sky, the tree also claims to be the tallest across the globe. 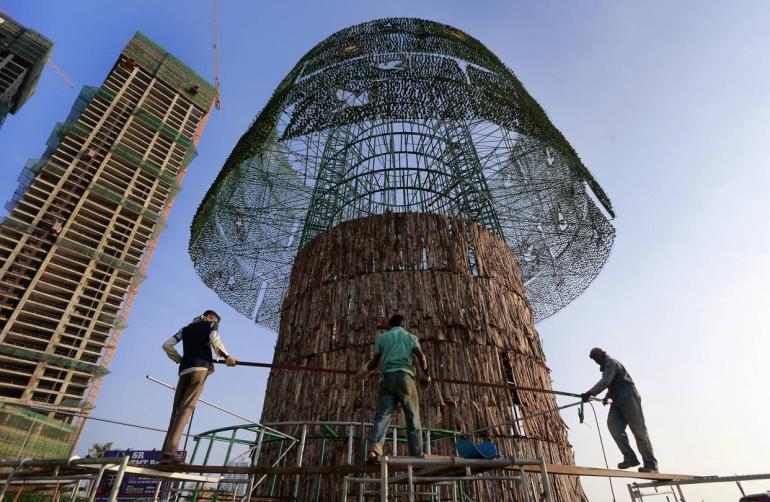 Built from steel and wireframes in the capital city of Colombo, the towering structure is decorated with more than 1 million natural pine cones colored red, gold, green, and silver along with 600,000 LED bulbs and a 20- foot shining star atop! To build a giant tree of its size has set the Sri-Lankans back by a massive $80,000. However, for all it’s worth, it may just make it to the Guinness book as the tallest Christmas tree ever to be witnessed by mankind (the current title being held by China for its 180-meter-tall tower of lights). For now, the Sri- Lankan wonder is pending evidence submission and confirmation from the Guinness World Records for the same.

While the organizers claim their motive behind building the giant structure is to promote ethnic and religious harmony in the country, it has received heavy criticism from the Catholic Church that labeled it as a sheer “waste of money”. Though the targeted height for the tree was set at 325 feet, the construction had to take a mid-way halt to be opened in time for Christmas. (which will continue to be on for viewing until the 6th of January). All said the lofty tree has certainly brought merry than ever for Colombo.

Tags from the story
Christmas, Worlds-Tallest