My luck seldom favors me and I love reading about people’s encounters with their luck, good luck of course. Another such chronicle is coming up your way. It was great to learn of an amateur treasure hunter, yeah I was pleasantly surprised to know there are real treasure hunters, and it’s not just the mummy series that has handsome treasure hunters living life on the edge. A pure gold cross dating from the 7th century has been discovered by a man with a metal detector. The inch-long piece of Anglo-Saxon jewelry is made out of 18-carat gold and was probably worn as a pendant. Experts believe the English-made piece could be worth at least $50,000. The anonymous finder discovered the 1,400-year-old cross just 12 inches beneath the sod on a farm in Nottinghamshire (not Egypt guys). He handed the find to a coroner who declared it as a treasure trove at an inquest. This means the finder will get half the proceeds of a sale. He is likely to split his earnings with the farmer.

It is thought the cross, which is decorated with fine detail and adorned with red gemstones, might have originally held a religious relic. Two of the four gemstones and any relic are missing. This cross belonging to the 7th century has surely made a 21st-century man very happy and lucky, of course. The specific location of the find is being kept secret for fear that so-called ‘nighthawks’ will descend on it in case there is anything else to be found. I just finished packing my bags for you to know where…Nottinghamshire, here I come! 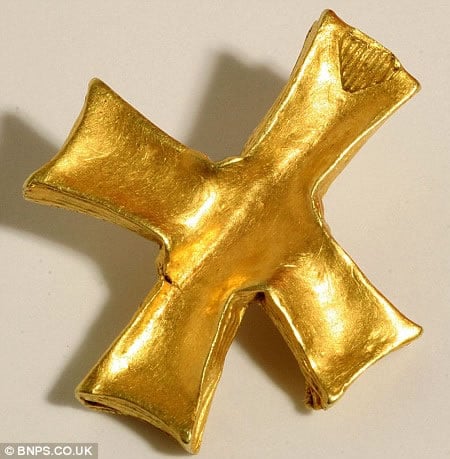 READ:  United Polaris has teamed up with Saks Fifth Avenue's for an impressive window display