This is so beautiful that you might too, as I did, pull out a sketchbook and watercolors to try a hand in art. There is nothing more fascinating than the strokes of an artist’s brush over as usual a medium as water in the most unusual, exquisite manner to creating something magnificent. Turkish artist Garip Ay uses a traditional Turkish form of art called ebru to recreate Van Gogh’s most famous paintings, the Starry Night and Self-Portrait. The technique, also called marbling, uses thickened water – which was colored black for this project. In just 20 minutes, the artist meticulously mixes carrageenan (a thickening material) into a bowl of water, drops different colored oils into it, and then uses a thin metal rod he “manipulates” the liquid from the painting. The video is brilliant, and its sheer art would strike even those who aren’t much into art. Once the image is done, he uses a special sheet of paper that he places over the water column and waits for the image to be transferred on the sheet and ready to be framed. 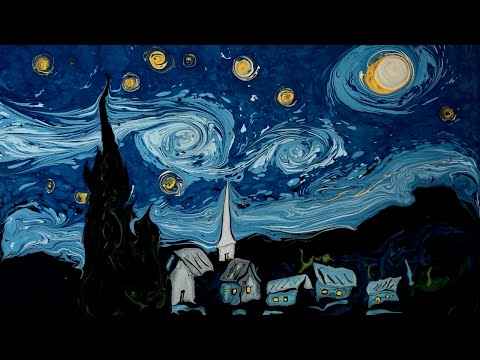 After Van Gogh, he wants to try out other renowned artists whose works inspired him. Fine men, these artists. Then and now.