Out of ideas to woo your better half? Worry not, as Today is Art day (an exclusive forum in support of artworks and artists) has got you covered with a new, unique and absolutely innovative Kickstarter campaign. As part of the project, the iconic persona of Van Gogh will be captured into a luxe little action figurine, that is worth all yours ooh’s and aah’s . Also, the animated statuette comes with not just one but two detachable ears! 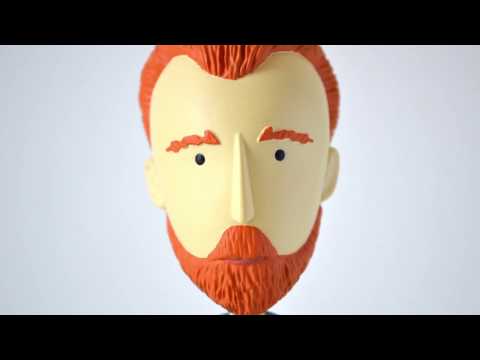 For those of you who cannot relate to the hype around the clip-on ears, here’s a bit of trivia around the artist’s life. As legend has it, Van Gogh had severed his left ear lobe with a razor blade in a fit of lunacy, which he later presented to a prostitute as a token of love. Apart from his paintings, daring quirks like these have made him the true legend that he is known to be. In tribute to the revered artist, the mini-figurine dons a blue coat with a pinned sunflower, apart from featuring two fully detachable ears. It also comes packaged with a paint brush and replicas of his famous painting, including The Sunflower and the Starry Night.

To lay hands on this Van Gogh toy, you will need to support the idea on Kickstarter by donating at least $21 to the project. The ultimate goal behind the campaign is to “make art history more fun, develop a new kind of product for art history fans [and] pay tribute to one of the greatest painters of all time.” Regardless of the motive, a tiny Gogh for keeps is not something to be missed!

Tags from the story
Van-Gogh