Ever since news broke out of the Osama bin Laden’s death, Americans have been particularly curious about the dog that assisted the Navy SEALs in their ambush at the Abbottabad compound. It turns out that our furry friend, dubbed as Cairo had as much protection as the Navy SEALs themselves. Outfitted with the hi-tech K9 Storm armor, Cairo had a state-of-the-art protection. The patented armor was developed by Jim Slater, a veteran police dog trainer and his wife Glori, and totally customized to fit Cairo.

Several features of the armored vest include a high-def camera hand-sewn into the vest and placed on the dog’s back. This camera indirectly acts as the eyes for its handlers, allowing them to see what the dog sees using the handheld monitors. The lens of the camera has a protection in form of impact-resistant shielding and can automatically adjust to night vision. The armor is also designed to be waterproof for all the missions involving water-based attacks. The encrypted signal is strong enough to allow the handlers to locate the dog as far away, up to four football fields. As if that’s not enough, the armor has the capacity to protect the dog against shots from 9mm to .45 magnum handguns. So how much is this high-tech armor worth? This sophisticated and advanced dog armor costs about $30,000. No amount is too high for protection of our loyal furry friend. 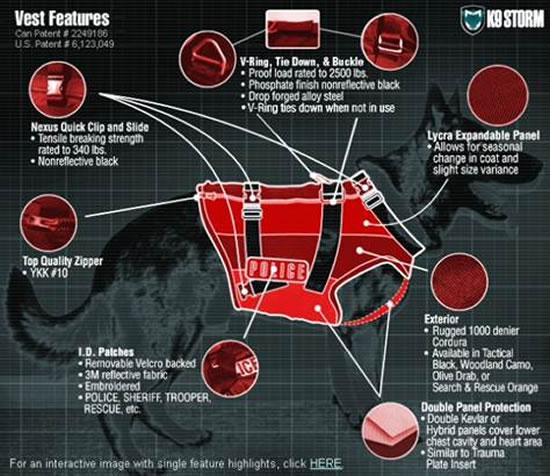 Arm candy of the week: Dior dishes out a stunner in the form of the new DiorTravel vanity case