Some people love their pets, and then there is Louise Harris of Essex, U.K. Louise threw the most expensive and over-the-top wedding for her pet pooch Lola. Eighty human and dog guests attended this grand event. Lola married Mugly, a Chinese Crested, who won her hand (ahem…paw) at a Facebook contest organized by Louise. Lola’s wedding dress was designed by designer Michele Ochs and was walked down the aisle by Louise.

READ:  Harrods offers Lambda - The Most Expensive Olive Oil in the World

After the ceremony, both human and dog guests were treated to an over-the-top buffet of lavish chocolate fountains, cupcakes, fresh fruit, mini doughnuts, and fudge. Louise, who also owns two other dogs, confessed that she thinks of her pets as kids and loves to spoil them. The price tag for this extravagant affair was a neat ₤20,000 ($32,600). Wonder what the World’s Most Expensive Dog’s wedding will be like? 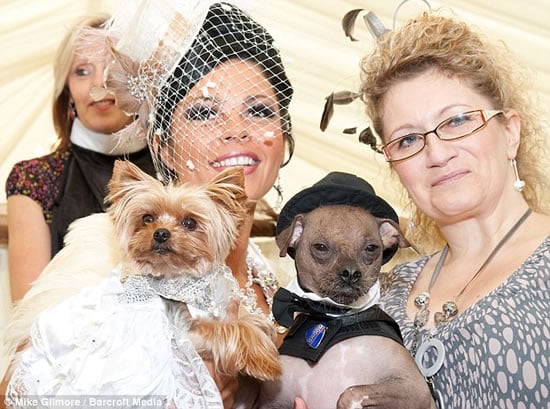