Wedding ceremonies are meant to be grand and the couple leaves no stone unturned in making it a memorable affair for friends and family. From flower girls to bridesmaids and the best man, everyone is carefully dolled up and rehearsed for the big day. Apart from the obviously important people, another person that plays a huge role in making it a grand affair is the ring bearer. And while lovebirds often opt for the little ones in the family to take up the responsibility, a particular couple decided the thrust the ring in the hands..err..paws of their adorable Goldendoodle instead! 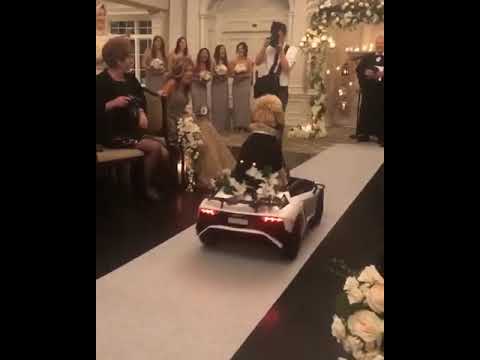 We are talking about the dynamic duo of Taylor Tremont and John Selser who recently tied the knot in a near perfect ceremony on New Year’s Eve. The couple who treat their Goldendoodle (named Frankie) as their own child, decked up the dapper dog in a custom-made tux and seated him in a remote-controlled Lambo, which he drove down the aisle (with a ring tucked somewhere in his periphery) in style on the big day! As expected, the doting pet did his job perfectly, a testimony of which is the loud applause that he received from the audience. If you’d like to catch the handsome furball in live action, don’t forget to check out the video on Taylor’s Instagram that displays the dapper pooch’s successful stint with a caption reading, “It was perfect!” Afterall, a four-legged in a Tux, driving down a Lambo on the mission can never be a bad idea!

Tags from the story
Dogs, Lamborghini