A Bel Air home is looking for a new owner and possibly his $500 million. Joining the posh chateaus and mansions in swanky Bel Air is possibly the most expensive home in the world. The property currently under construction by former film producer turned home builder Nile Niami, announced its hefty price tag of $500 million.

You’re sure to get your money’s worth at this 4.6-acre hilltop property that includes a 74,000-square-foot main house and three smaller homes, bringing the total to over 100,000 square feet.
The luxurious new home will offer its new owners 360-degree views of the Pacific Ocean, Beverly Hills, downtown Los Angeles and the San Fernando Valley; a 5,000-square-foot master bedroom, a 30-car garage, 45-seat cinema and a “Monaco-style” casino. 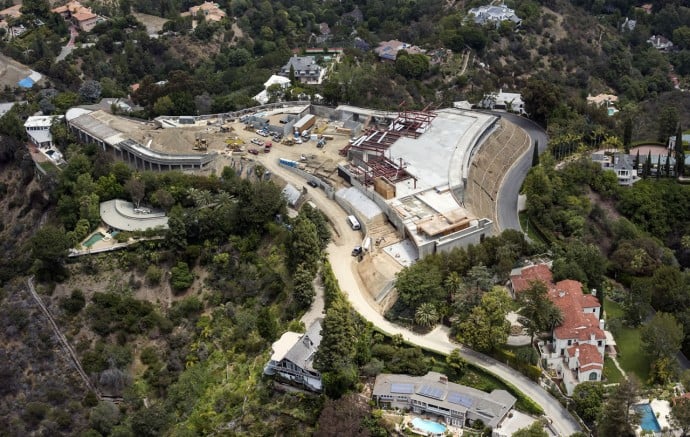 Boasting of every possible amenity, the property will also have an open plan bar, personal nightclub, a “jelly fish room” with water-filled tanks on three walls, four swimming pools including a 180-foot infinity pool and about 20,000 square feet of artificial grass.

Expected to be complete in another 20 months, if sold at $500 million, the apartment will beat real estate records both in the US and worldwide, according to Bloomberg. Currently the most expensive home ever sold in the US was bought last year by Barry Rosenstein, managing partner at Jana Partners, in East Hampton, New York, for $147 million and internationally, a London penthouse was purchased for $221 million in 2011. The most expensive homes on the market today include an estate in France’s Cote d’Azur, which is going for $425 million, and a penthouse in Monaco going for $400 million.

READ:  2310 feet high, 150 storeys and an observation deck - The worlds second tallest tower is planned to be built in Russia

Niami isn’t new to the luxury realty market having built and sold a mansion for $18 million to Tyler and Cameron Winklevoss, the twin brother entrepreneurs who sued Facebook. His portfolio of luxury homes also includes the 30,000 sq ft Fendi Casa, which was completely fitted out with designer furnishings by fashion house Fendi and sold $65 million last year.

Tags from the story
Los-Angeles, Most-Expensive