When the 90,000 square feet house in Florida dubbed the AmericanVersailles will be ready, it is all set to become the most expensive dwelling in all of America. Said to be bigger than a 747 airplane hangar, this will become the largest house in the United States. The house will include nine kitchens, 30 bathrooms, two movie theatres, and even a bowling alley. The house will have an observation deck, a sushi bar, a 4000 square foot closet, two tennis courts, a full-size baseball field, and a health spa. In fact, let a film crew make a movie about how the house was built.

The mahogany doors and windows which protect the house bear a price tag of $4 million. Owned by Billionaire David Siegel, 77, and Jackie Siegel, 46, however, had planned just 60,000 square feet dwelling for their family of eight kids and five dogs. The place needs Segways to reach from one place to another! 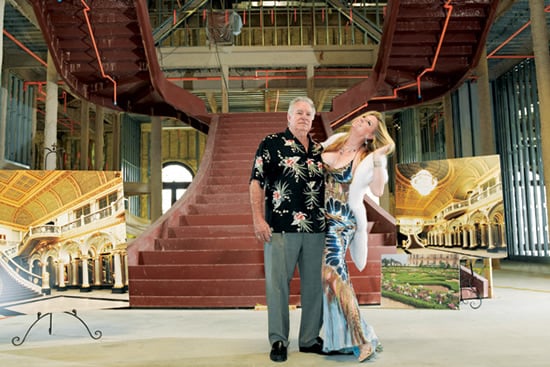 Their current house is a 26,000 square feet mansion with 19 bathrooms and as many bedrooms and a two-storeyed closet, with a built-in stripper pole! However, this is just a makeshift place till the new home is ready to move in. While Mr. Siegel thinks his wife is a shopaholic, he personally doesn’t believe in wasting money. I wonder how she talked him into splurging into this baby then!
While Siegels doesn’t think it’s big, and though he doesn’t want it bigger, he quips, “I don’t. I want to make it done.”
[Abcnews]

Tags from the story
Boeing, Florida, US