Neung Roi at the Radisson Blu Plaza is a little Thailand in New Delhi. The restaurant brings the spiritual, comforting vibe of Southeast Asia to the culinary capital of India. Neung Roi means 100 in Thai and has been named after the 100 degree C East longitude, which runs through Thailand. As soon as you step in, subdued lighting from the multi-tiered goblet chandeliers suspended from the roof, warm wooden hued walls, yellow runners spread across the table, lotus-esque tea-light holders; passed a hallucinatory blur of Asian evanescent tradition. 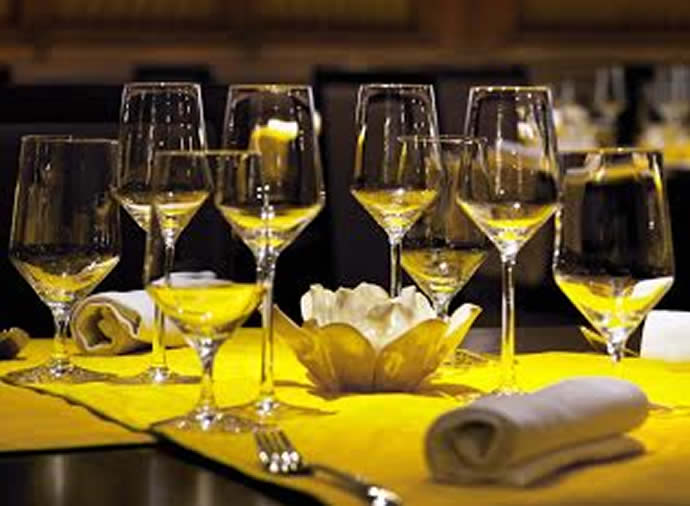 Recipient of multiple awards including the Best Fine Dining Thai Restaurant of 2014 from the Times Food Award, and with highest ratings by BBC good food, there is an ancient Thai vibe right from its traditional music to the aroma of essential oils. With its heart in New Delhi and Thailand outré tendencies on its sleeves, it is however a sly rebellion against fusion. Neung Roi is probably one of the few authentic Thai restaurants in the country to not reinterpret the taste Indians grew up on and apply ‘garam masala’ spices to its coconut curries to suit the food palette of its Indian audience. 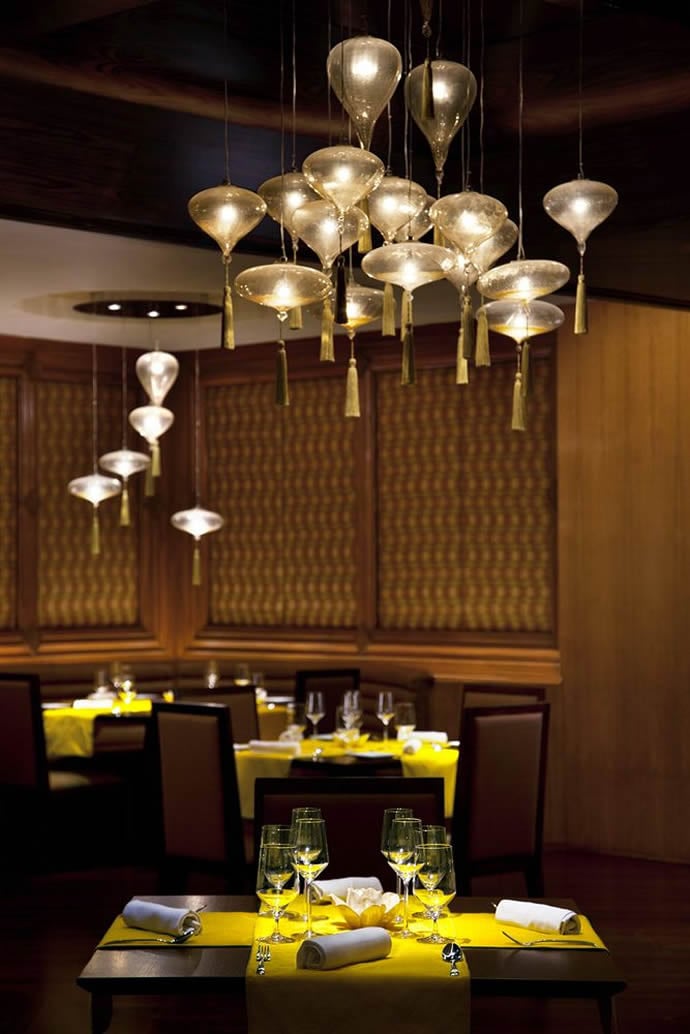 On a rather rainy Thursday afternoon, the first sight of Neung Roi was abuzz with diners. Once we stepped inside, the staff practically hosed us down with hospitality.
As technology continues to get smarter and faster, I am handed down with iPad to scroll through their digital menu. Pad Thai noodles and Red curry are unmistakably endemic in the Thai food, a fixture on the menu of every restaurant in India that pretends to serve Thai-style cooking. But just like waking up from slumber, I realize that Neung Roi has an exhaustive menu with over 160 preparations including appetizers, soups, salads, main course and desserts. 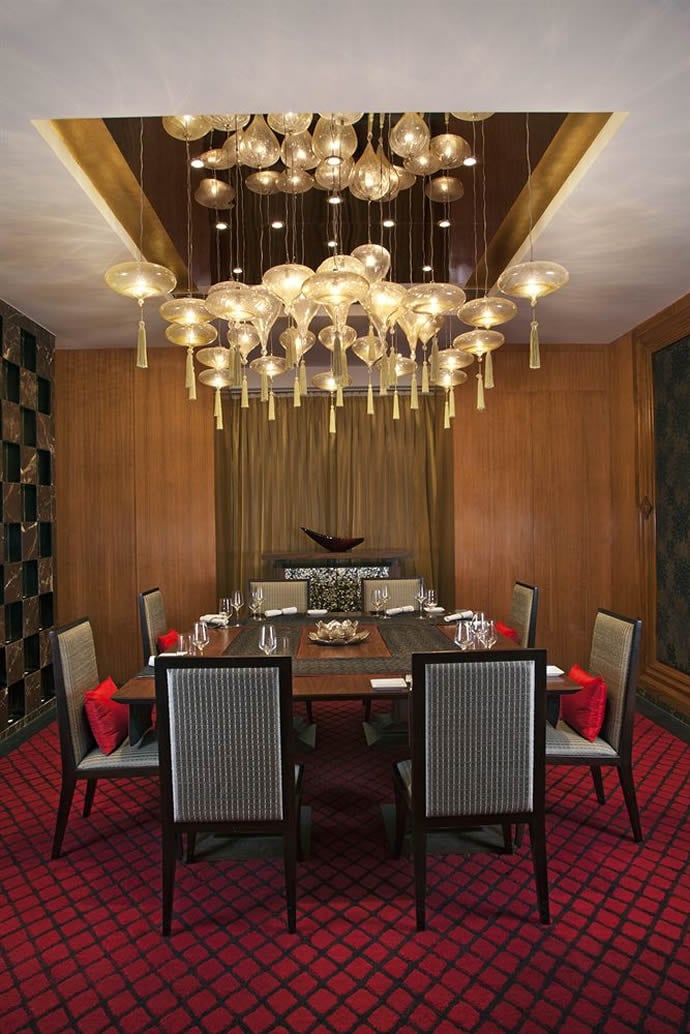 Inspired from the four culinary regions: Isan known for spicy food, Lanna for hot and salty, South if you prefer seafood and fresh produce and the Central Plains for mild, subtle and balanced; the menu is descriptive and helps you to make your choice.

Neung Roi has created the best of Thailand in the menu, for each dish to tell a story, as the best meal should always do. 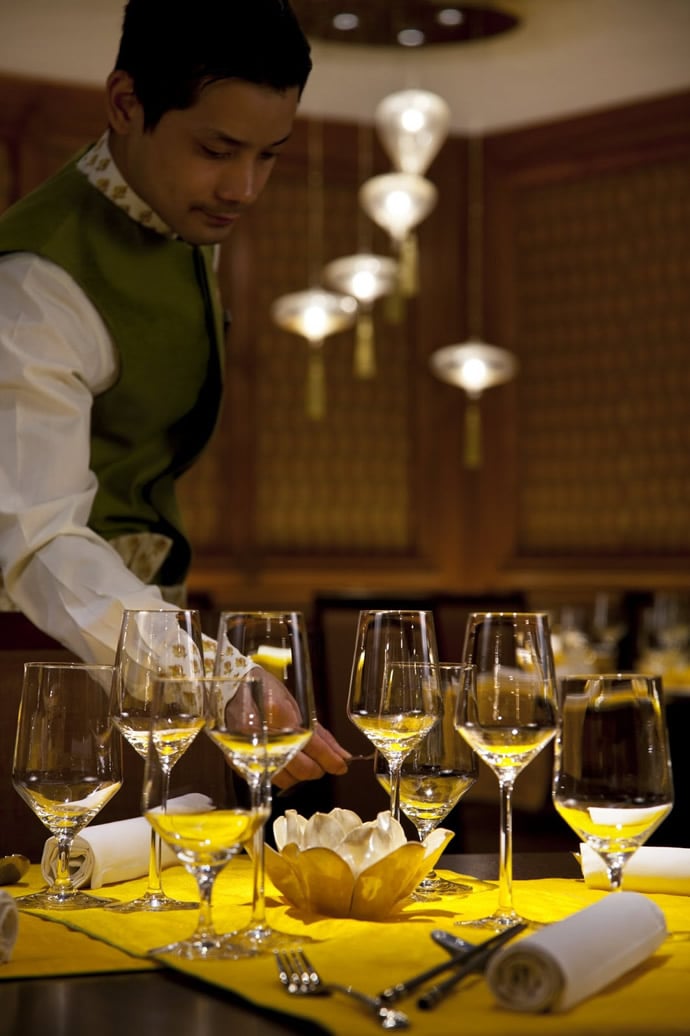 Like it’s with all the guests, I was almost immediately offered with complementary ‘Porpia Sod’. Although most of the spring rolls at other restaurants tend to tear themselves apart before you got them to your mouth, here they were structurally impeccable.

One can experience the masculine crispiness of the wheat flour crust unfolding into a sculpture-filled pocket of juicy and tender vegetable filling.

We were next served grilled chicken with coriander roots and roasted chilli sauce dubbed as ‘Gai Yang’ originating from the Isan region followed by ‘Pla Phad Khing’ wok fried fish with black mushroom and crispy ginger. 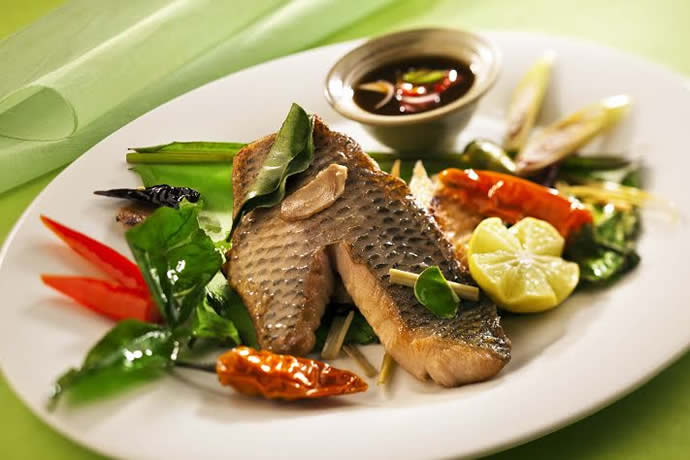 For the calorie-conscious connoisseurs who relish healthy salads, ‘Som Tum’, raw papaya salad with chilli, soya sauce and peanuts is highly recommended. We also tried ‘Yam Som-O’, pomelo salad with crispy onion, garlic and palm sugar tamarind dressing however I had to sip through my Apple Mojito to wash down the saltiness but pork lovers should definitely give it a shot.

The salad portions are great on its own or as a side dish with the main course.

Presented in a covered soup bowl, ‘Tom Yum Gai’ made with lemon-grass, kaffir lime leaves and galangal was served next with ample bite-size chicken floating along with fragile exotic mushrooms that you usually don’t find in your supermarket. Chef Sreenivasan tells me that all the spices, herbs and fresh produce are imported every alternate day from Thailand to maintain the smoky flavor as well as texture and color. The chewiness and tingle of the fresh herbs in the soup is rather precise and does not overpower the taste.

The main course options are modest, yet burdened with the history of the culture of the cuisine.

We were presented with a bowl of rice with jasmine aroma ‘Khao Suay’ fills my senses as I advance to ‘Gaeng Kiew Wan Gai’ chicken green curry with eggplant, basil, kaffir lime and coconut milk as well as ‘Goong Thod Ha Rod’ stir-fry prawns in a home made five flavor sauce and fresh coriander. There are plenty of options for green eaters. ‘Phad Pak Kiew’ stir fried kale with morning glory, pokchoy, mixed green vegetables mildly sauteed in soya bean sauce kept my palate cleansed and light and also goes well with the meat.

For dessert, I was served the Tub Tim Krob. The dessert is superlative. Transparent sago floating in chilled water chestnut in coconut jasmine syrup appears like red rubies, served in a glass floating over a goblet.

Tub Tim Krob was mildly sweet with a hint of salt as all Thai desserts do, and therefore, it is always recommended to stir your dessert to balance the flavor.

When at Neung Roi, you can’t leave without trying their in-house organic ice cream with different flavor everyday.

Neung Roi’s atmosphere and design is a continuation of the Radisson Blu Plaza, and is just moments away from the Indira Gandhi International Airport. The hotel boasts 261 hotel rooms and suites with amenities such as the state-of-the-art gym and on-site three-level spa. There are many other fine-dining eateries including its iconic restaurant ‘The Great Kabab Factory’.