In my review of Shangri-La’s – Eros Hotel, I gave you a glimpse of the culinary wonders and delightful service Café Uno presented. This next move is proof that that last trip left me hankering for more. I decided to go all the way in my relationship with the restaurant. So after breakfast there and a lip-smacking lunch at its scintillating Asian sibling, 19 Oriental Avenue before, I decided to return to the hotel and deem its café the slot for most-esteemed-meal-of-the-day. Dinner here would complete my eating out triumvirate at the property. Now if the dinner truly turned out the numero uno of meals is for you to see.

As we stepped into the restaurant once again, its familiar and much-loved vastness greeted us. Only the magnificent windows that last overlooked the hotel’s swimming pool and lush green gardens now reflected back at us. We’d have swung open the doors and walked right into the nocturnal splendor were it not for the persisting winter nip, compared to which the ambiently lit indoors seemed a lot more inviting. The staff seemed different too from the last time. Of course, that is because they work in shifts. But that wasn’t the perplexing part; the servers seemed to be gliding in between tables in two different kinds of outfits. While one half had their hotel staples on, the other wore what could be called a glorious display of Indian tradition. Turns out, it was all in lieu of “DAWAT – E – AWADH”.

The eatery is known for dabbling in various cuisines by way of food festivals. The latest one, translating to a feast of Awadh meant, on offer, was authentic fare from the city of the Nawabs, Lucknow crafted by the café’s team of chefs. Quite a feat I must say, for a multi-cuisine “café”. Nodding in approval at the thought (and the emanating fragrance from the buffet counter) we thought the regular menu wasn’t running away, in which case, “new” is always better. But as we were guided to our designated section, another thing became clear. From the looks of the server’s ethnic clothes, it seemed the hotel had consulted some top-notch stylists. But the “special” décor gave the impression that they ran out of funds by the time its turn came. Still, the food island of a café and its overall contemporary cool more than made up for it. So we decided to overlook the warning signs and dig into some Awadhi fare. 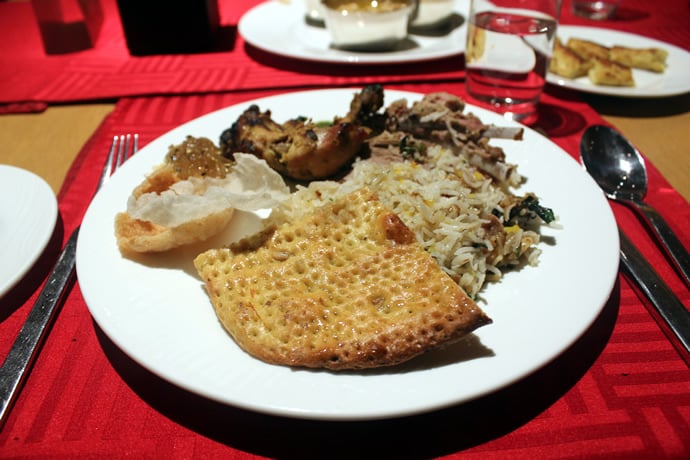 As we took our seats, we couldn’t help but notice how nearly every table offered a vantage point for the café’s several counters. Guests can choose to dine al fresco, of course, but the delectable spread of national and international cuisines that meets the eye is pretty persuasive. Ours began with a guided tour from the man behind the festival himself. Chef Anwar thronged us with trivia on the dishes and their place of origin, much as he filled our plates with everything from Fatmi Raan ki Biryani (Basmati rice cooked with lamb leg marinated in curd, ginger and garlic) to Paneer Pukhtan (cottage cheese cooked with white pumpkin and Awadhi spices). Now unlike dishes from other regions of India, Awadhi food is cooked using only a handful of uncommon spices, and as we sat down to savor the same came the tale of cooking technique and the stories of olden-day kings. 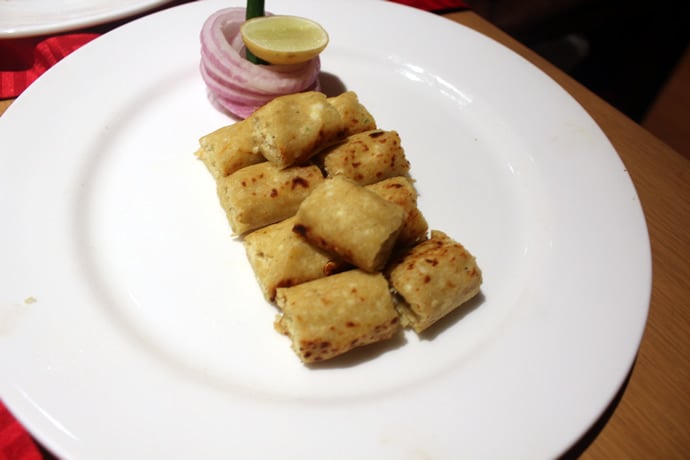 If you’re familiar with Indian Kings’ eating habits, you’d know they’d skip the spicing but never turn down a thing made with cashew/ almond pastes. The same goes for lashings of cream that visibly thickened nearly every gravy. My favorite would have to be the Murgh Samina, which is chicken chunks marinated in hung curd and cooked in a cashew nut paste, especially when eaten with a chewy sweet bread, a first for both my friend and me. The Kebab-e-Kalmi (chicken leg marinated with gram flour, egg and cream and cooked in a clay oven) stood out as well. But the meaty star would have to be the lamb seekh kebab that came with oodles of flavor and a coriander chutney dip. The Galouti, on the other hand, was Gal-hmm. “hmm” because its rawness could work for some, in my case, it made me cringe. The chef explained that while the items were all festival specials, depending on the demand, they could appear on the regular menu as well. I crossed my fingers harder when I crossed over to the vegetarian section. 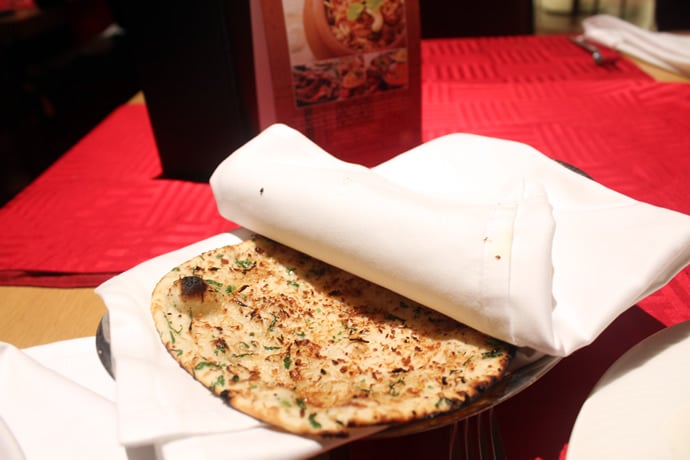 The lentil soup would have to be the best, silken concoction I have ever tasted. The Mushroom Roganjosh ushered in a refreshing vegetarian twist to what is mostly made as a mutton preparation. As for the accompanying bread, oh the bread! Commonly called “naan”, it was a perfectly crisp garlicky revelation! And speaking of perfection- marmalade section! Its array of sweet and sours kept us thoroughly engaged. Especially after sampling the papaya marmalade on the chef’s recommendation, I could tell he wasn’t lying when he said an Indian actress who recently visited the café couldn’t get enough of them. He was gone by the time we got through with our dinner though, given how long we took between buttery dishes. So when dessert time lingered we were sans space in our bellies as well as commendations. 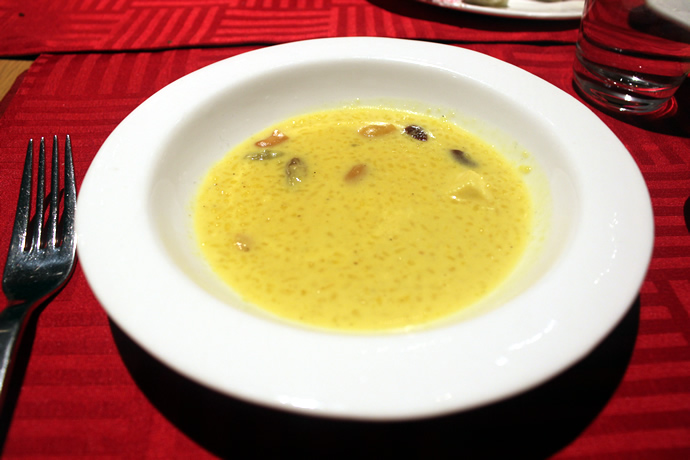 Nevertheless, we charted our own sweet trail, and a wise choice came disguised as “no homemade ice cream”. While the server (understandably) declined to reveal the gelato label they sourced, it turns out room was instead needed for the halwa after all. A sweet recipe prepared with carrot and the dry fruit, Anjeer, it was rich without being overbearingly heavy or saccharine sweet. While there were other Indian sweets and kheer (a dry fruits-specked rice preparation) as well, this particular one best compensated for the oily Macchi Shabnami (river sole cooked in curd and cashew nut gravy), the rarer than required lamb from the biryani and all things in between. It is amazing how the meal was a family of succulent hits and misses. Then again, that is precisely the nature of most families. They nurture a love-hate relationship, in this case making you build an undecipherable bond with the place. I must say one thing, though. Aside from the festival, given the dearth in Delhi’s 24×7 dining options, this has to be one of the best.

Served for dinner, the buffet was priced at Rs. 2100 per person, plus taxes.