Ahead of the 83rd Salon International de l’Auto show in Geneva, Chevrolet has revealed a 2014 Corvette Stingray Convertible glimpse. Vice president Ed Welburn says that the Stingray coupe and the convertible were developed together to ensure that there was no compromise in performance technology or design. Thus the convertible will retain the coupes driving dynamics despite having a fully automatic top that can be opened at speeds going up to 30mph or even remotely by the key fob. The structure for the top uses a combination of carbon fiber and sheet molded composite skin making it sturdy enough to handle all kinds of weather. The engine on the convertible is as powerful as the all-American Stingray coupe, with an LT1 6.2 liter V* engine that provides over 450 horsepower and an impressive 450 pound-feet of torque.

While performance specs for both cars are still confirmed, Chevrolet is claiming a powerful 0 to 60 in less than 4 seconds. The convertible can be upgraded to the Z51 performance package, which is built to cope with the demands of track use and includes features like a dry-sump oiling system, close-ratio gear-set, and coolers for the breaks.

READ:  Fancy a Chevrolet Corvette styled boat? Get it for $1.7 million 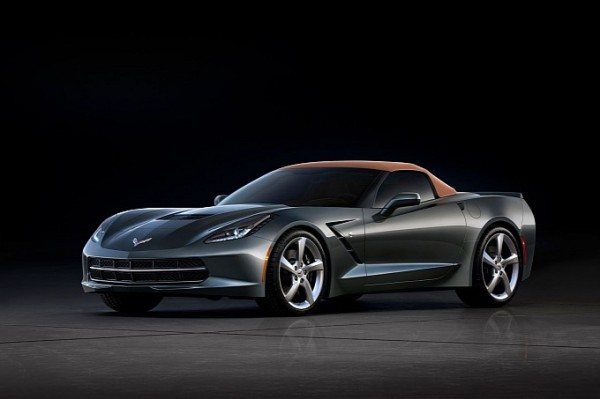 The Chevrolet Stingray coupe and convertible are set to arrive in North American showrooms later this year, with prices for both still to be announced. Chevrolet also plans to roll out the car in Europe, Britain, the Middle East, Japan, and Russia. The official unveiling of the 2014 Corvette Stingray Convertible is set to take place on the 6th of March.