Following countless leaks and teasers, BMW officially unveiled the new 7-Series last week. According to BMW, it has been designed to combine “supreme dynamic ability” with “luxurious long-distance comfort”. The 6th generation model is a huge improvement from the outgoing model and the Bavarian automaker pulled out all the stops to make it into a class-leading model. The company has released a mammoth 24-page press release that describes all the new features and upgrades in the 2016 BMW 7-series, but here are the top 7 reasons we believe the new flagship model is absolutely amazing.


7. The best-looking BMW 7-series we have ever seen – It won’t take long for you to realize that BMW has come up with the best-looking 7-series in the history of the flagship. It is a massive improvement from the current generation of 7-series, which has been with is for more than 7 years. Sharper bodylines and the slender design of the new generation 7-series makes it look a lot more sportier and futuristic, unlike the rounded styling of the outgoing model that made it look bulky. A side-by-side comparison of the two models tells us that they aren’t very different in terms of dimensions; however, the designers did a stellar job to make the 6th generation 7-Series less imposing. Yet its presence has been maintained through its dignified design elements that make it look special. 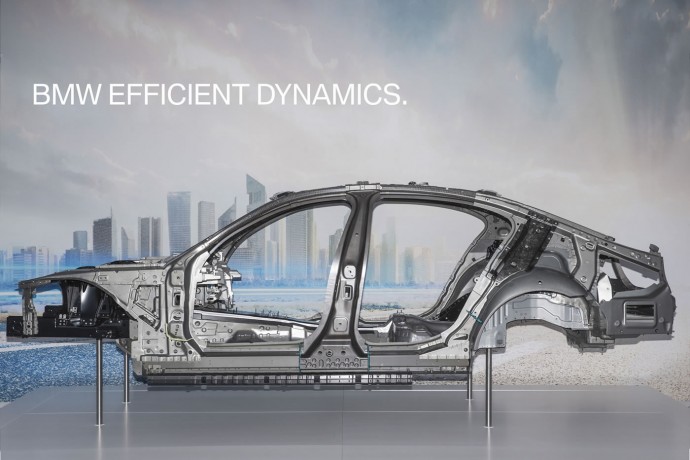 6. New modular platform with body structure made from carbon fiber reinforced plastic – The 2016 BMW 7-series debuts the Bavarian automaker’s brand new modular platform called “35up.” The new platform will underpin many future BMW models, including the 3-Series, 5-Series, 6-Series and others. That also includes their wagon and GT derivatives. As far as the body structure is concerned, it’s proper cutting edge stuff. The new core structure alone accounts for a drop of nearly 300 pounds off the current generation 7-Series. It has been derived from technology developed on the i8 and i3. The new 7-series is also the first car in this segment to combine CFRP with aluminum and steel. 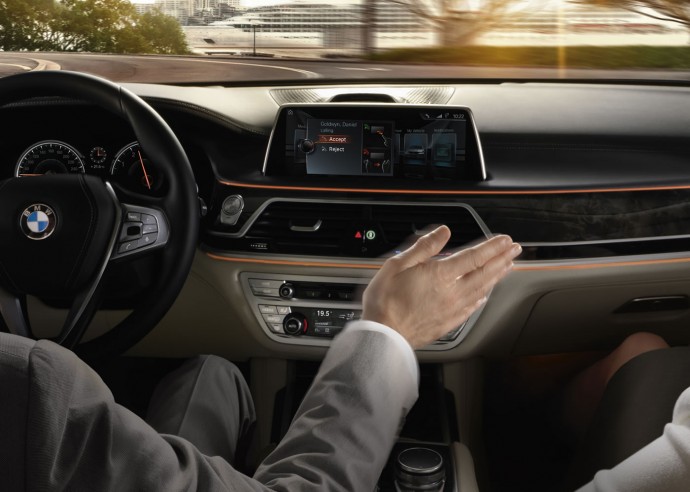 5. Gesture control – The 6th generation 7-series also debuts the new iDrive 5.0. Although, it retains the traditional iDrive controller in the center console but for the first time it gets touchscreen support along with much touted gesture control. There are sensors in the headliner to track the driver’s hands. Only a small number of gestures supported, presumably to limit distraction and prevent the system from getting confused, but you can raise or lower volume with a circular finger motion, wave your hand left or right to accept and reject calls, and configure one additional gesture to control one of several different functions. 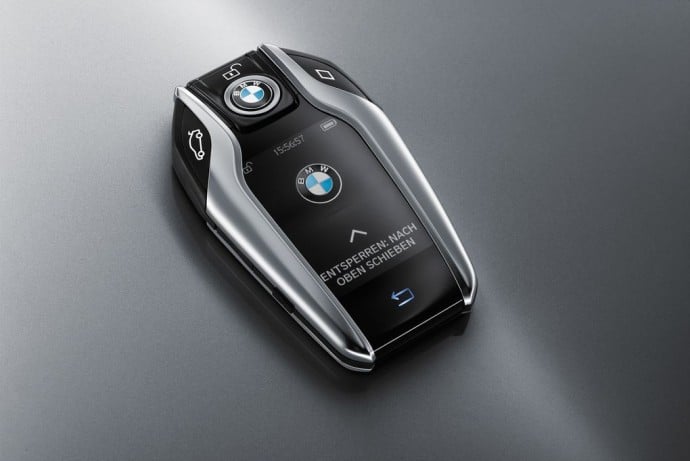 4. Sci-Fi-like touchscreen key fob – From the touchscreen iDrive system, we come to the amazing touchscreen key fob. Available as an optional extra, the display key looks like a bigger version of the standard wireless key fob and has a full color touchscreen embedded in it. BMW debuted the display key-fob with the i8, but it’s not available with any other model in their line-up as of yet. With the touchscreen wireless key, you can control car functions like switching on the climate control. The fob can charge while it’s inside the car, but if the battery dies, a second battery takes over that will make sure it just acts like a regular wireless key until you have a chance to recharge. 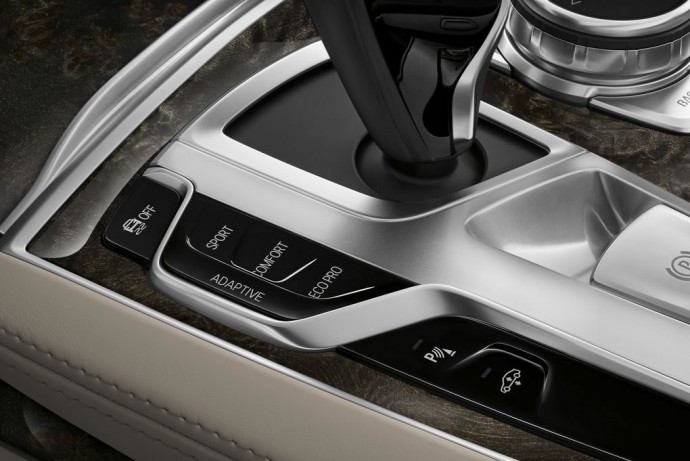 3. GPS-controlled transmission – Although, this feature has been there in the Rolls-Royce and Mini car for while now, but it’s a great addition to the new generation 7-series. The transmission uses GPS data to determine the proper time to shift gears based on the curves of the road to increase efficiency. The car uses satellites to constantly determine what road you’re driving on and in what conditions. It then uses this data to anticipate how and when to shift gears. 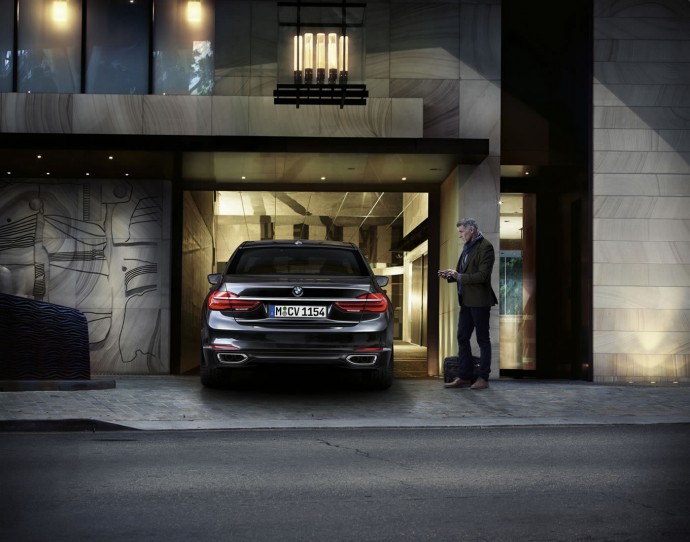 2. Remote parking – Months before the car was unveiled, this feature was leaked on the internet, and later BMW themselves used it as a teaser for the car through a promotional video. Now, we have seen many high-end cars introduce this feature and miserably fail doing so. However, the system in the BMW flagship is a little different. The new version of the optional Parking Assistant feature controls the entire maneuver into the parking space, including all the necessary steering, gear shifting, acceleration and braking operations. That’s not all; this entire thing can be controlled with the display-based key fob unit from outside the vehicle. 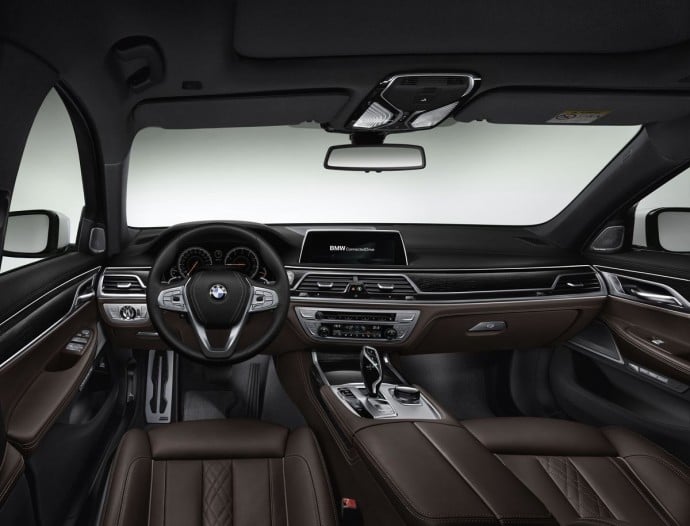 1. Completely revamped interior – While the outgoing model’s cabin looked dated in front of the new Mercedes S-class and the Audi A8, the 2016 BMW 7-series is not only loaded with cutting edge technology inside the cabin but also features class-leading creature comforts. The new 7-series comes with optional Ambient Air package, featuring a programmable fragrance system that offers eight choices in three different intensities. Luxury Rear Seating Package and Rear Executive Lounge Seating Package transform it into an ultimate chauffeur driven luxury limo. The executive package lets rear seats be reclined up to 42.5 degrees, while the front passenger seat can be moved all the way forward, the headrest can be electrically moved out of the way, and a footrest pops out of the back. Additionally, the new 7 also comes with panoramic ‘Starlit Roof’ similar to the one found in Rolls-Royce. The system uses LEDs to project light across etchings on the sunroof’s glass to show a “starlit sky” in your choice of six colors.