What do you get when you combine luxury, future-tech, speed and the open seas? You could get the next generation of high-speed sea crafts that incorporate the latest hydrofoil technology into the luxury of a 70-foot catamaran. It’s a concept that’s still pretty much a “concept” but one that longtime sailing enthusiast Tom Phillips of Orlando, Florida is planning on making a reality thanks to projects like kickstarter.

Although using hydrofoil technology isn’t new, the far more advanced “foiling” (as they call it) methods have been incorporated into small boats and seem to be working out quite well so far. According to Philips (and when he owns his own craft guess what they’ll be calling him) the technology is already available and his company, Zephyrous Charters, is just looking for a way to bring it into the world of luxury cruising. “We are seeking funding for the research, development and construction of a completely carbon fiber luxury cruising yacht that employs this foiling technology.” The foiling system will not only allow large luxury crafts to travel speedily over the water (about 30 knots) but it would also allow them to traverse in shallow waters.

Phillips has put together a crack team to get this ‘boat afloat’, so to speak, with builders like
Peter Johnstone, founder and CEO of Gunboat, a company that specializes in building carbon fiber catamarans. He’s even wrangled The DNA Design Team from Holland to design the craft. 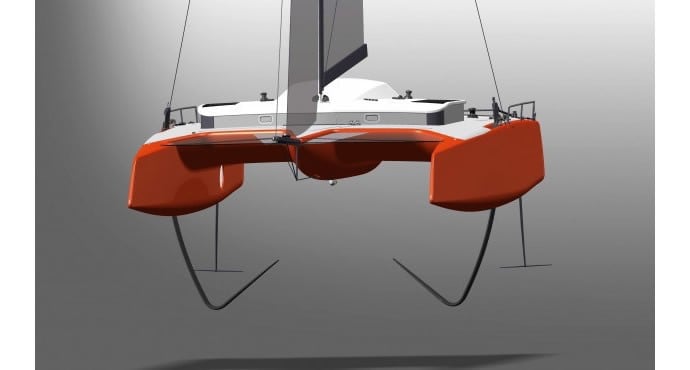 “This new foiling technology will obtain at least an 80 percent lift to increase speed and enhance stability but retain the refined characteristics of a cruising catamaran,” Phillips says.

Of course this seems like a rather ambitious undertaking and seeing as their budget is about $500,000, it seems like a slightly long shot. But that being said, with the help of a Kickstarter program, things could just work out. After all, there are even more ambitious concepts out there like the Monaco 2050, a luxury yacht that has a plane built right in.

For right now, should you decide to contribute to this proposition, donations of any amount are encouraged by the company and they’ve assured contributors that they’ll be invited to the 2016 Miami International Boat Show for a complimentary ride on the new catamaran… if it’s ever completed.

READ:  Fit for a billionaire diva - This $147 million superyacht is 279 feet long and offers world-class luxury with a large cinema hall, beach club, and even a fireplace for unforgettable intimate evenings

Backers who make a $25 pledge will receive a T-shirt with the Foiling Cats logo. A $100 donation gets you a ticket to the official launch party at the 2016 Miami Boat Show. For $1,000 you receive 2 nights lodging in Miami, 2 boat show tickets and 2 launch party tickets and for $10,000, contributors can take a three-day cruise on the new catamaran. Sounds interesting enough, did Captain Phillips pique your interest?

Tags from the story
Catamaran, Superyacht