Isn’t it a bummer when you’re running late for office and you happen to forget your car keys in the drawer or even worse- misplace them? Well, hoping to beat such ill-fortunate everyday situations is a Tesla owner who recently got the keys to his model 3 permanently implanted inside his hand! No, we’re kidding you not! 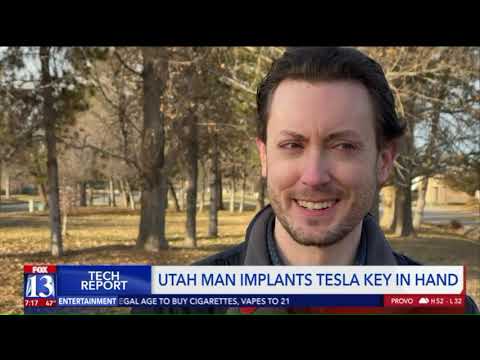 A resident of Utah, Ben Workman has put an end to the dilemma of keys being lost or stolen with this very ingenious idea. The implant allows him to simply press his hand against the door of his Model 3 to open it. In addition to the car keys, the dedicated tesla owner also has three other chips embedded inside his body that allow him to open doors at work, log into his computer and share contact information all with the wave of a hand.

Noting that it was difficult to find someone for the job, Workman in a statement said, “I tried going to a veterinarian, a doctor, a piercing studio, no one would do it,” However, he finally found a piercing studio who agreed to the surgery after much persuasion. The tesla driver further added, “I (now) play tricks on people who don’t know I have it in my hand. I try and convince them a banana is the key and then I hold a banana up and [the chip] unlocks the door.” Well, talk about keyless entries!