Who knew the flat engine cover of a Ferrari Testarossa can double up as luggage carrying space! Well, at least the owner of the Testarossa you see in this particular picture will have you believe that. Shared on Reddit, you can see a Samsung TV taped to the engine cover of the classic Italian sports car. The license plate has been blurred out, and there’s no information on Ferrari or its owner, but it appears to be from somewhere in Europe. Almost all supercars are known for their terrible storage space, and the Testarossa is no different. In fact, the Ferrari has a tiny frunk (front-trunk) big enough to barely accommodate a tiny handbag, let alone a massive TV. 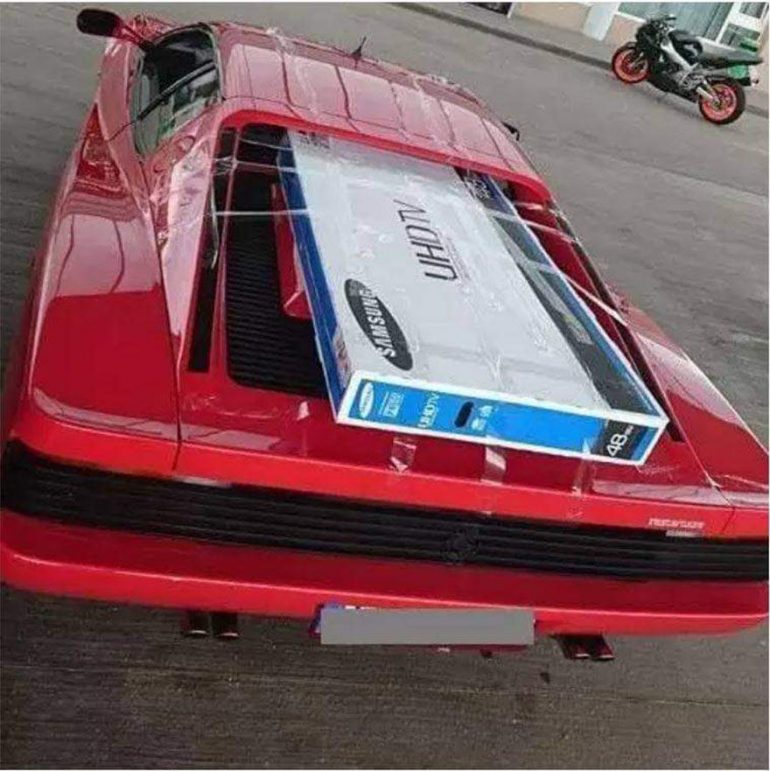 However, the Ferrari owner thought it would be good to go shopping for a TV in the Testarossa. What could go wrong, right? Strapping a Christmas tree to the roof of a supercar is a weird trend I never understood, but apparently, it makes for a good subject for photography. But seeing a 48-inch Samsung UHD TV fixed to the engine cover of a Ferrari with sticky tape is simply hilarious. Underneath that flat cover is a 4.9-liter flat-12 engine, and placing a massive TV on might lead to overheating. Why would you risk damaging a beautiful classic Ferrari that can easily sell for more than $125,000 for a TV that retails for less than $2000? Well, we live in a bizarre world.